Today in Media Files, veteran broadcaster Mark Colvin has died at 65, The Australian uses a Senate inquiry to push its anti-ABC agenda, a confected story about Seven’s new comedy show gets it some free publicity, and round two of Fairfax’s budget coverage — this time, with its best reporters, back from strike.

Giant of journalism Mark Colvin dies. Veteran ABC broadcaster Mark Colvin has died, aged 65, after a long battle with a rare auto-immune disease. The ABC announced his death on Twitter this morning and has published an in-depth obituary. Colvin, who has presented radio current affairs program PM for the past 20 years, contracted the disease while covering the Rwandan genocide in 1994, and his kidneys never recovered. He had a kidney transplant in 2012 from a friend he met while covering the phone-hacking scandal in the UK, the story of which has been written into a play. The ABC published this interview with Colvin by Julia Baird in 2014, where he talks about beauty, happiness and stoicism.

Liberal Senator Eric Abetz has taken it as a move towards “totalitarian power”, and the “first step towards a resurrection of the Gillard-Brown media watchdog which proposed a government censor to shut down unfair coverage”.

The Australian‘s immediate response was to take it as the government taking up the Oz‘s cause against the ABC, publishing the story as “#BREAKING” on its Facebook page yesterday with the headline, “ABC faces federal inquiry”. 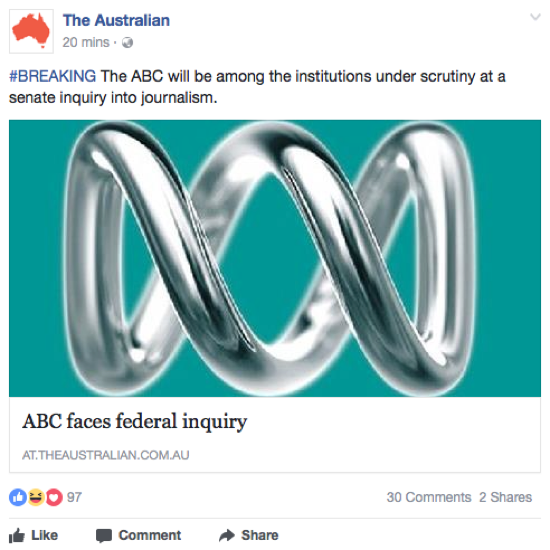 Any publicity’s good publicity. Comedian Dave Hughes and Seven’s new show Behave Yourself have gained a bit of free publicity this week over the non-story of Hughes being scratched from the show after joking about Seven boss Tim Worner at the Logies. News Corp’s gossip pages Confidential reported that Hughes had been dumped from the new panel show yesterday because of jokes he had made about Worner. The Seven boss is embroiled in a court case with his former employee and mistress Amber Harrison. Seven told The Daily Telegraph the scratching was a mix-up, and according to Fairfax today, Worner called Hughes to say he had no problem with the comedian appearing on the network. So after all that, a few more people have heard of Seven’s newest addition to its line-up, Hughes is allowed to go on the program, and readers haven’t really gained anything.

Judge calls out Hun. Victorian Supreme Court judge Lex Lasry has had a go at the Herald Sun‘s coverage of a teenager granted bail, despite police prosecutor requests that he be denied. According to the Hun, Police Association boss Wayne Gatt said the decision was an “anomaly”, and police prosecutors’ opinions on whether bail should be granted should be given more weight. “It would be a very good idea to read the reasons this very experienced judge reached the decision he did,” Lasry tweeted. 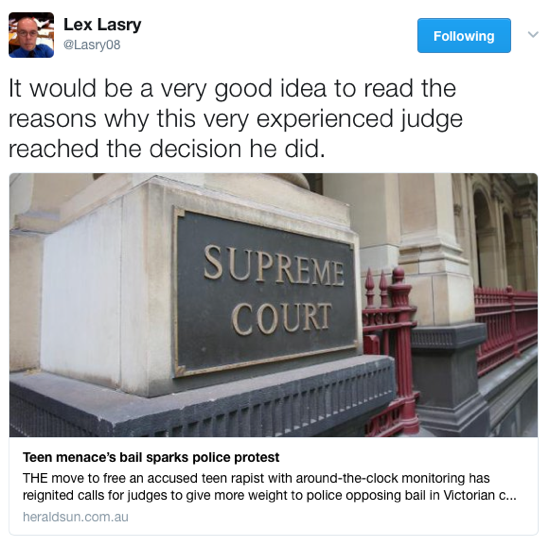 He also linked to the full judgment, which is available here.

Russians beat US press to Trump meeting. Member of the White House press gallery are up in arms that after they were denied access to a meeting between US President Donald Trump and Russian officials, Russian state media published photos of the meeting. A White House official reportedly said that an official photographer from both the US and Russia was present, which reporters have taken to mean that TASS, the Russian state news agency, was acting as the official photographer.

Some news outlets (such as Fox) have refused to publish the pictures, while others have made it very clear that the only way they’ve been able to get the photos is from the Russians.

Once more with journalists. If there was a feeling of deja vu, or OMG, not another budget extravaganza from The Sydney Morning Herald this morning, you’d be forgiven. The paper’s core commentators and smartest writers on economics and politics have returned to print after the seven-day strike to protest against the $30 million and 125 jobs in cuts.

For the second day in a row, the Fairfax paper dissected the 2017-18 budget. The page 1 pointer in the right-hand column named the culprits of this second gouging. Led by Ross Gittins, the paper’s veteran economic editor and writer, the team also included Peter Martin, the Melbourne Age’s veteran economics editor and writer. And then there was Peter Hartcher, prince of the international editors in Australia and political writer. Jessica Irvine, another of the SMH’s economic team, was back in print as well, and so was Mark Kenny, the SMH’s top political writer, not to mention James Massola, the chief political correspondent, who wrote the page 1 lede.

It was a welcome change from the tortured prose of James Chessell, Fairfax Media’s boss of all stories business and political. The quality of this morning’s commentaries was far above what we were given in the final strike-busting edition of the SMH. To give a essential political context to yesterday’s coverage, Fairfax republished the commentary from veteran political reporter Michelle Grattan (who used to work for Fairfax’s Melbourne Age and now writes for The Conversation).

In business, Elizabeth Knight was there, and online, Michael Pascoe was back and pointing out how Scott Morrison’s infrastructure spending boom was nothing of the sort — just a fiddle with the time (10 years instead of the previous six-year program). The SMH also ran a six-page budget special in its Money pages to play a bit of catch-up.

The strike edition was adequate, but it lacked insight. Lose Fairfax’s star writers and the SMH is just another bit of paper for the fish and chips. — Glenn Dyer

More gloomy news for Ten. Investors have returned to their gloomy views about the future the Ten Network after News Corp failed to ride to the rescue in its quarterly statement and analyst briefing on Wednesday morning, Australian time. News Corp CEO Robert Thomson wouldn’t comment at all on the media law changes except an anodyne remark that if they were real, then News (i.e. the Murdochs) would support them. It sounds very much as though the Murdochs have not settled on a course of action regarding Ten and stopping it from going broke.

Ten shares dropped more than 9% to end at 22 cents, just shy of the all time low of 22 cents hit last Friday, the day before the Federal Government revealed its proposed media law changes which wipes out TV licence fees and will end ownership restrictions (except for foreign investment approval and competition regulations).

Ten shares leapt on Monday in the wake of the release of the proposed changes, hitting a high of 32 cents before sinking back to end at 26 cents. They remained there on Tuesday, but slumped 9.6% on Wednesday after the News Corp earnings release, which confirmed what a disaster Ten has been for Foxtel, 50% owned by News.

Foxtel paid 15 cents a share for the Ten stake in 2015 — that is now worth 2.3 cents a share, ignoring the one-share-for-10-held consolidation last year. The change of view about whether Foxtel no longer has “significant influence over its investment in Ten” in the third quarter was not explained. This sounds very much like Foxtel has abandoned Ten to its own future — perhaps Foxtel kicked up a huge fuss about the losses, which are dramatic, even for a pay TV monopoly. — Glenn Dyer

Where is Sky News? Details of the cost of the purchase of the Australian News Channel (ANC), operators of Sky New, seem to be missing from News Corp’s March quarterly report and filing with the US Securities and Exchange Commission this week.

While other purchases are mentioned in the filing under Note 2 “ACQUISITIONS, DISPOSALS AND OTHER TRANSACTIONS”, with the price given, the purchase late last year of ANC is not detailed except for this mention:

Contrast that to the details of the purchase of Australian Regional Media from APN News and Media late last year:

“In December 2016, the Company acquired Australian Regional Media (“ARM”) from APN News and Media Limited (“APN”) for approximately $30 million. ARM operates a portfolio of regional print assets and websites and extends the reach of the Australian newspaper business to new customers in new geographic regions. ARM is a subsidiary of News Corp Australia, and its results are included within the News and Information Services segment.”

So yet another Murdochian accounting puzzle. But it does seem odd that of the two acquisitions in Australia in December, one is mentioned and one is not. Another transaction in December involving REA Group is detailed — it was the sale of assets in Europe. — Glenn Dyer

Glenn Dyer’s TV ratings. Another night of Last Resort being all but ignored by viewers — 593,000 viewers watched nationally, with an increase in the metros and a drop in the regions. Seven’s Aussie Property Flippers kept it company near the bottom with 695,000 nationally. Its solid 100,000 margin was good enough to put it five places ahead of Last Resort, which remains the most apt show title since this year’s season of The Biggest Loser.

Seven’s House Rules with 1.24 million finished ahead of Masterchef (MCA) on Ten nationally with 1.17 million, reversing the metro finish where MCA had 876,000 and House Rules 751,000. The regional audiences were the difference – 495,000 for House Rules against 300,000 for MCA. These figures tell us that both programs are not very solid —  they can’t even crack a million metro viewers when they have the night to themselves (with The Voice resting its chords).

Limited News won’t have to worry about any “inquiry into the future of public interest journalism” – on the grounds of their pausity of “journalism” for a start, and “public interest” second?
A “news outlet” that uses it’s elite position to treat news about one side of politics in a generally positive partisan and subjective way : contrasting with the way it casts news about others in a negative light.
Handling the PR for their Limited News Party : while showering other parties in combative negativity (not least the ABC – while it advocates “freedom of the press/speech”?) – more like rogue elephants in musth.
All under a the auspices of a token “Professional Code of Conduct” it treats like bog roll.
They’re more fake news than fair dinkum.

Since when is the opinion (of the presenter) and editing to suit an advertorial narrative/agenda – two of Limited News primary dogmas – “news”?

Yes, Vale Mark Colvin, although listen for the pronunciation as “Vail” from various poorly-read public figures (I’m looking at you, Albo).