Larissa Waters and the Greens’ tedious return to identity politics

Larissa Waters needs to care less about her breasts in Parliament and more about the fact that there are no damn jobs in this country.

It was just under two months ago Greens leader Richard di Natale powerfully began the release of his party from the big, dumb paws of identity politics. This week, Larissa Waters sent ‘em back. The Queensland senator, otherwise notable for her commitment to soiling Barbie’s reputation, has “called out” the sexist character of the Coalition in the upper house, much as a teen five minutes into her Facebook revolution might call out the poor behaviour of her classmates.

Waters, who had just gained worldwide attention for federal Parliament’s first official act of lactation, grabbed headlines again when she said that Coalition policy was based on a lack of compassion. They don’t, she said, “care about women”.

It’s good for teen girls to “call out” others for their lack of virtue. If I hadn’t learned the skill of telling sexist peers to bugger off early in life, I would not have grown up to become a grating feminist. Society needs us. It is usual for fiery adolescents to make connections between broad complexes of structural inequality and their own life experience. If your high school daughter charges someone else’s high school son with being a tool of the patriarchy, send her my congratulations and buy her the new iPhone.

If your senator attributes government budget policy to same, send her back to high school.

Look. Between us. There may be little doubt that many of those moved to join the Liberal Party take an odd view of women, especially those subject to intimate partner violence, the policy area that had prompted Waters’ comments about this lack of “care”. It’s a party tradition, after all, to charge any person clearly abandoned by either the state or its partner economy with responsibility for their own misery. It’s a “lifestyle choice”, after all, to live in crushing poverty and, heck, if you can’t find work in a labour market so shaky even the central bank acknowledges it, we’ll hit you with random drug tests.

We can, perhaps, understand at the level of personal ethics why Waters would be moved to say mean things to major party members — if I were a parliamentarian, I would be tempted hourly to show them my arse. We cannot be so forgiving when we consider this in its public context.

As we have seen in the debate on asylum seekers, personal moralising simply does not move policy along. When we claim that one side has a monopoly on compassion, we lose. The other side can always counter with, “I have just as much compassion as you, I exercise it differently” and then go on and on forever about people smuggling. The argument must not be about compassion and who has most of it. Unless, of course, the goal is only to demonstrate compassion to voters, thereby stalling the future of those behind the wire in detention camps.

[Razer: oh dear God, I might actually have to vote for the Greens now]

I agree with Waters that there is a great gulf of hypocrisy between apparent concern for intimate partner violence and its frontline funding.  I am appalled that Turnbull’s early demonstration of passionate commitment to this widespread problem has essentially ended in funding a whole load of crappy ads. However, to insist that she cares more than the man who briefly convinced us that he cares more is discursive deadlock. Who cares most? I don’t care.

This is no call for quiet reason. This is no deluded plea for debate club deliberation, or for any politician to temper their legitimate rage. Anger from Parliament can ignite voters, as we saw when Jacqui Lambie spoke so well on cuts both to welfare and to company tax.

It is, however, a call for the Greens to quit poncing about like officious teen leaders at a model UN. Waters in particular comes across, for all her noble intentions, like someone who believes she is a marvellous role model. Which is in marked contrast to Lambie, who appears to voters like Willy Loman gone to Canberra. She is ground down by life, but still fighting.

Waters looks like she is trying to Set an Example For Others. I mean, it’s one thing to get out a historical breast and feed your hungry newborn, but it’s another to announce that you are aware that you have done so on Twitter. Waters declared this as a devised performance, said that she was “proud” to do it and then used the moment intended to gain headlines not to call for rights for other Australians, as Lambie did, but only for “more #women & parents in Parli”.

And this is symptomatic of her error and the ongoing error of the Greens, which I thought had ended with Di Natale’s marvelous speech to the Press Club in March. You want to know why you can’t get past a 10% primary vote, guys? Because you appear to care more for Hashtag Women in Parli than you care for Hashtag Women in Australia. If you say you are removing your breast only for your sisters in the policy class, then we know where your interests lie. We might even say that you don’t care about women. Other than those sassy teen leaders who make it to Parliament.

Again, Di Natale’s speech was one of the best I have heard delivered by an Australian politician in recent years. It was free from tedious virtue and conscious of class. The leader did not chastise people for their lack of virtue, and, in fact, outright said that he understood why people might be led to vote for extreme right-wing candidates in the present age. He took an uncommonly grand view of history and called the election of Donald Trump a rejection of neoliberalism, an impatience with poverty. In short, he emptied his words of prissy moralising, drained the latte glass that twits like to talk about and filled me with hope that here, finally, was a leader who remembered the concept of a political economy.

He did not blame people for their lack of virtue, as the Coalition does and as Waters has done again.

Razer’s Class Warfare: gender is a social construct, but leave the Barbies alone 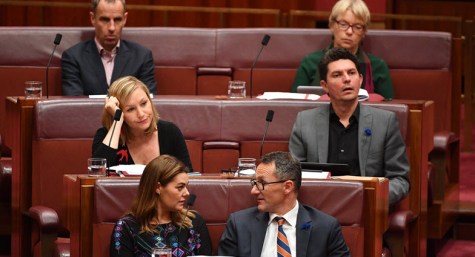 Poll Bludger: section 44 is a sticky wicket in need of reform

How disappointing. I was really impressed – even excited – by Di Natale’s press club speech. I thought “Finally, here’s a party I just might be able to vote for instead of copping ‘failure to vote’ fines every federal election. I will watch them for awhile and see if this new direction is for real, or if it was just a speed bump on the road to useless, divisive, pretend left liberal, virtue signalling, entitled, meritocracy, professional knowledge class bullshitdom.” Looks like I can turn my attention elsewhere. Back to scanning the horizon for the genuine left, yet again.

Despite it being called compulsory voting, it isn’t really. All you have to do is turn up at a polling booth. No fines 🙂

Yeah, and you can write funny things on the ballot paper they give you, or turn around and file the papers into the bin on the way out. Become part of the informal vote, the fastest growing voter statistic.

I’m often tempted to, guys, but I’d rather write my reasons for not voting on the ‘failure to vote’ fine notice, so it’s actually officially on record somewhere.

I’ve worked quite a few times as an AEC polling booth official, Draco (The money’s ok for a casual day’s labour, though it’s a bloody long day). Nobody even reads those funny things written on the informal votes, let alone records them anywhere: we’re already dog tired and just want to get ’em counted so we can get out and go home. Ditto the forms people cleverly file into the bin on the way out: polling booth officials have to go through the bins and dig ’em out again. Needless to say, we don’t find the clever political statement particularly clever after a 13 hour plus day.

Getting marked off the roll means you’re complicit in maintaining the fiction of a functional, compulsory, representative democracy. Nobody’s recording your informal protest vote reasons. Sorry about that.

Not giving more money to the government is cool, and the appeal to the method I described. If you value the official complaint more than avoiding the fine while also not voting, keep doing what you’re doing. I’ve never heard of someone bothering to do that, and for what it’s worth, it is kinda cool.

Anyway, There is also nothing wrong with having a little fun and amusing yourself. Neither method of not voting is going to abolish compulsory voting, let alone representative democracy.

I’m a little jealous of people that never enrolled, that is the absolute best way to not vote and I screwed it up by thinking my vote mattered.

I can’t see the point of endorsing the shit sandwich our majors offer.
They’ll take your vote and wipe their arses with it.
They do take note of what’s written on informal votes.

I may not agree with everything you say, but I love the way you say it. Haha!!

There is a lot of agreement 🙂

Never thought of the issue that way. I guess that it takes a women to get another perspective on things? Given that, pity there are not more women in parliament offering more perspective, because as a white middle-class male, I am hearty sick of hearing that particular view.

You’re comment on the Greens, HR, is smack on the money. It fits in with GR’s piece about UK Labour… they should start advocating for votes beyond their patch.

I think this is a bit misty-eyed with respect to Lambie, who is no less venal that the rest, in my view. She, too, is in Parliament solely to boost her own identity-clan; it’s just that her clan (ex-ADF, proudly know-nothing, “battlers”) are different to the usual lot (University-educated, UMC, lawyers, business people, “knowledge professionals” etc.)

Ah yeah, a prissy green, really reaches out to me to vote for them.