Winning the break-up. “Have you broken the news to Tony Abbott and Joe Hockey?” The Daily Tele‘s Sharri Markson asked Treasurer Scott Morrison on Tuesday, as he revealed a budget that seemed to slam the door closed on the pair’s legacy as prime minister and treasurer. While Tony Abbott would find out about the budget measures in the party room along with his fellow backbenchers, Hockey is on the other side of the world fulfilling his role as Australia’s ambassador to the US. So how is he taking it? Not crying into his Weeties, that’s for sure. Hockey has tweeted videos and photos of himself attending a Midnight Oil gig in Washington DC, including a selfie with former Labor MP Peter Garrett, “an old sparring partner and mate”. Doesn’t miss Parliament at all, by the looks of things. 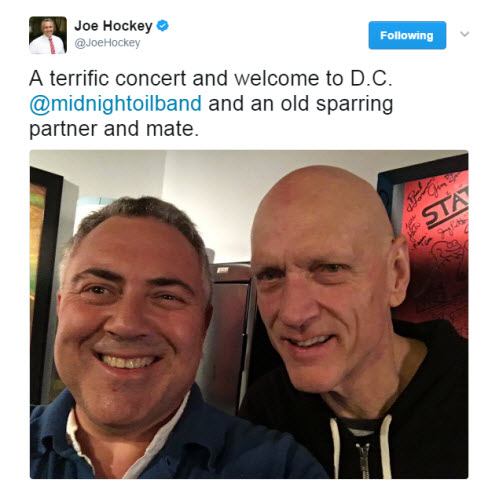 Latho at Wombat Hollow. Newly minted member of the Liberal Democrats Mark Latham has used a lot of breath and column space in the past few years yelling at elites and claiming that he spoke for the ordinary men and women of western Sydney, who, he says, hate all the same things he hates. Now he is appearing at a country forum hosted by former NSW Liberal MP and former federal treasurer of the Liberal Party Michael Yabsley. Yabsley runs the Wombat Hollow forum at his country property in the Southern Highlands, with previous guests including current PM Malcolm Turnbull. Now Mark Latham will launch his own “Outsiders” program alongside broadcaster Alan Jones. Just to prove he isn’t too fancy, it’s a “Bar-B-Q” event. 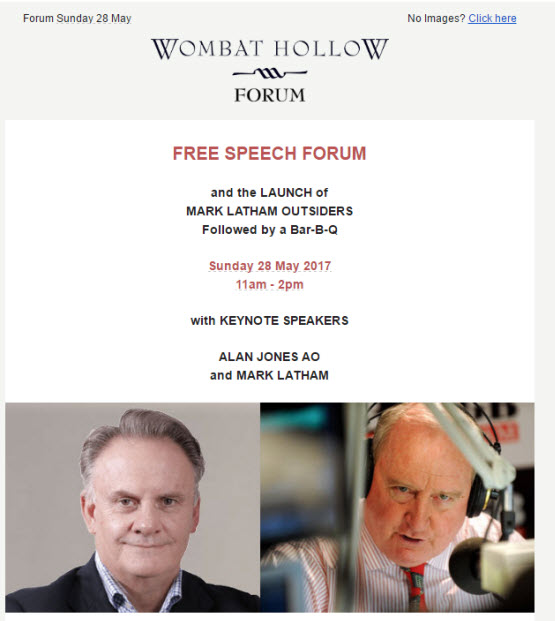 Yabsley wrote in the invite:

“Mark Latham has drawn a line in the sand by denouncing the role of political correctness, identity politics and social engineering in Australia.

Latham has shown the guts to take this fight to Australia’s movers and shakers without fear or favour.

Come and support Mark Latham as he gives new meaning to ‘the power of one’.”

In defence of Nixon. As his administration continues to lurch from one scandal to another and he pushes policy that betrays the people who voted him in, Donald Trump might have you asking “could anyone in America genuinely be happy that Trump is the president?” There is one group that is swiftly emerging: former candidates for “most hated ever Republican president”. First, George W. Bush’s opponents in the media and in politics started talking about how much they missed him, praising his “rhetoric” and “statesmanship” —  two qualities that did not attract much praise when he was actually in charge. Now, Trump’s decision to fire FBI director James Comey — a move that was widely described as “Nixonian” — has given supporters of another widely reviled Republican president a chance to retrospectively boost his reputation. In the aftermath of the firing, the official Twitter account of the Richard Nixon Presidential Library tweeted a clarification of sorts: “FUN FACT: President Nixon never fired the Director of the FBI #FBIDirector #notNixonian.” 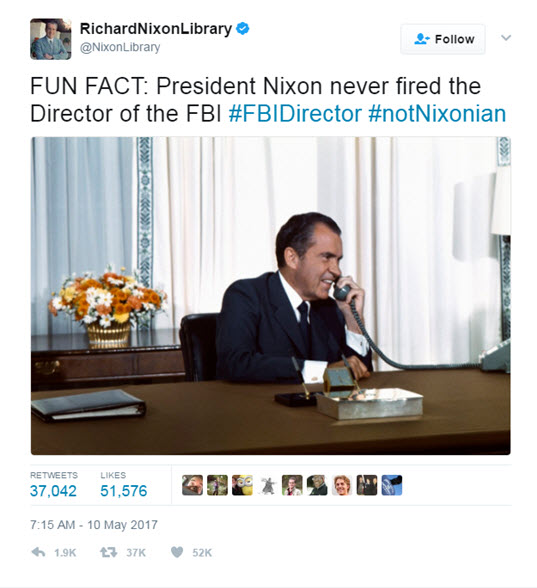 Too sexy for my shirt. Yesterday we noted that a South Australian government agency was asking for people to design a T-shirt that represented the state in order to win a cash prize. Ms Tips thinks Crikey is going to be in the money with our suggestion of a black shirt to signify power blackouts, but one tipster also suggested “picture of a crumpled transmission tower labelled Day of the Triffids — alternatively War of the Worlds”. There’s a lot more design work and interesting messaging in that one, we like it.

Such an event is the launch with Latham and Jones.

Too sexy for my shirt : “picture of a crumpled transmission tower…War of the Worlds”. Much more a War of the Words, I would have thought.