How the protocol for the budget lock-up on Tuesday night almost caused a parliamentary crisis.

By now you’ll be bored witless by the political rhetoric and point-scoring over ScoMo’s budget. If one more commentator or colleague describes it as a “Labor budget” I’ll just assume that opposition senators will be lining up to vote for it.

For me, the biggest budget story was the banks. Not that they were going to be hit with a levy (aka a super tax) but that, despite the so-called lockup, the bash-the-banks news leaked around 10am and $14 billion was wiped off the major bank stocks.

I have written to the AFP demanding a police investigation. Let’s find out who the short-sellers were and did they have connections on the Hill?

Speaking of the lockup — which has become a joke with the leaks (or government drops, to be more accurate) — it almost caused a parliamentary crisis.

At a crossbench budget procedure briefing by leader of the government in the Senate George Brandis and Senator Mitch Fifield on Monday, the issue was raised about senators going into the lockup. Could they leave if the division bells rang?

I raised it because the 45th Parliament had had 198 divisions and I was the only senator with a perfect 198 voting record.

The Attorney-General agreed that if anybody attempted to stop me performing my voting duties as an elected senator that would be a contempt of Parliament.

Hence, I was a tad surprised budget morning to receive an email from an A-G adviser warning me:

“Consistent with standard practice in previous years, participants may enter the lock-up after 1.30pm but, once they have done so, cannot leave until 7.30pm, with the exception of Senators, who may leave the lock-up at 7.00pm. This means that Senators may NOT leave the lock-up for divisions.”

I wrote back that I would be leaving if a division were called and if security tried to impede me I would physically resist and have them charged with contempt of Parliament.

Then I echoed that pledge on Neil Mitchell’s 3AW program. Within an hour, the Treasurer’s Department advised us that if a division were called, crossbenchers would be escorted as a group to the chamber. We could not talk to staff and surrendered phones must stay that way.

Luckily, the bells did not ring.

Victoria was not amused. At that same Brandis-Fifield briefing, the Attorney-General was explaining how the Senate Adjournment speeches Thursday night would be restricted to crossbench party leaders’ and independents’ budget replies.

He told One Nation’s leader, Pauline Hanson, that meant she could speak but PHON’s other three senators could not.

I interjected: “Unless they become independents by Thursday.”

No hint of a smile from The Hanson or her shadow, James Ashby.

Especially when their own Senator Brian Burston mischievously cut in: “I was just going to say that.”

My favourite memory of a treasurer Keating budget night party was being approached by prime minister Hawke. Cigar in hand, he was in a good mood.

It was around the time of renewed French underground nuclear tests at Mururoa Atoll.

I asked the Silver Bodgie about Australia’s reaction. The famous Hawke snarl came out: “I don’t like the fucking French either.” I had my story for the morning and it had nothing to do with the budget.

Some French official was visiting Australia at the time and next day I saw him on TV being peppered with questions at a press conference in Brisbane.

I hope it was not an omen. The hundreds of copies of Scott Morrison’s budget 2017-18 speech were all printed with the cover upside-down.

Pic of the week from Mardi Grass at Nimbin, where we discussed medical marijuana and the need for amnesty for parents who grow or buy cannabis oil to medicate their spasming children. Access to marijuana for other patients — especially the terminally ill. The urgent need for other states to follow Victoria’s lead on local production instead of imports. The need for at least decriminalisation of recreational use. 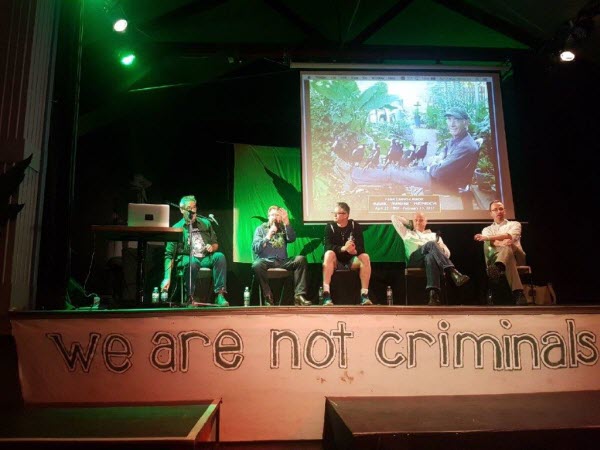 Don’t think that applied to me. I used to say: “I’m a man of my convictions. Just wish I didn’t have so many.”

You firmly resolved to assert your duty (by force if need be) to answer the division bells, on a night that the government would surely arrange for there to be no division bells*, having already surrendered your obviously-vetted phone? Way to not give ’em the power, mate.

*(no, I do not deny that the gov’t might shit the bed by forgetting to do that)

I also was disconcerted by the bank leak and immediately wrote to Mr Turnbull.
Due to the difficulty in monitoring digital devices it may be time to do away with the lock up so that journalists and others can listen to parliament like the rest of us. They can then report next day. Any leak would be easier to trace, although party room briefing, followed by lunch, would be extremely difficult to control.
Keep it up.
Kind regards,
Patrick Grant