Fairfax tells staff it is about to fire: be nicer to scabs. Fairfax staff returned to work today to a lecturing email from management threatening to sack them for their behaviour on social media in relation to the strike (of course, Fairfax has also threatened to fire them for going on strike in the first place, and then there is the tricky matter that the strike itself is over plans to axe a quarter of the newsroom). The email, from managing director Chris Janz and editorial director Sean Aylmer, said staff should make the transition back to work smoothly, as well as telling them what they should and shouldn’t tweet about:

“All employees of Fairfax Media have responsibilities to our mastheads and colleagues. Unfortunately, some Fairfax Media journalists have expressed their views relating to the recent editorial announcements and unlawful industrial action in a manner that is inconsistent with Fairfax Media’s Code of Conduct and Social Media Policy.

“In particular, Fairfax cannot and will not tolerate any of its employees:

“We will not tolerate behaviour that intimidates or disparages any staff for their personal choices, or which damages our mastheads. In this respect, we note that breach of the Code or the Social Media Policy may lead to disciplinary action, up to and including termination of employment.”

Arguments between staff throughout the strike were not uncommon on Twitter, but it doesn’t mention penalties for those who criticised the striking workers. Nor, oddly, does it mention any penalties for scabs like Joe Aston, who called a colleague a “dickhead” on Twitter for participating in the strike.

Budget night shenanigans. Budget day in Canberra has a particular ritual about it, but this year was different to previous second Tuesdays in May. Like yesterday’s quiet lockup without the usual crowd of Fairfax reporters, the evening was also quiet without them partying into the wee hours. Once the journos were let out and Treasurer Scott Morrison had given his speech and his first few interviews, it was time for the many dinners that make up the next stage of the night. In Parliament House itself there was the Liberal Party fundraising dinner, though sadly Ms Tips was not on the guest list. Over in Kingston the journos from News Corp and Fairfax’s management ring-ins tucked in at Portia’s Place. Next door at China Plate, the digital upstarts were dining, with cohorts from BuzzFeed, the Huffington Post and The Guardian (along with your correspondents) celebrating a long day’s work. Down at Public, the music was loud and the grads seemed younger than ever (Ms Tips fears she is getting old). Senator Sam Dastyari was there, but that is like reporting that water is wet. As Ms Tips headed home, our cab driver had his fingers crossed that this year he wouldn’t be faced with a vomiting Treasury grad halfway home. No word on whether his hopes were fulfilled.

Give Paleo pear Claire an Oscar. Are Barnaby Joyce, Christian Porter and Matthias Cormann in captivity? This video uploaded by the Prime Minister’s social media team last night shows Malcolm Turnbull giving a stump speech to some of his most senior cabinet ministers, in a video so awkward it makes the Finance grads’ Paleo pear and banana bread effort look like a piece of art. If you are trapped, Barnaby, just blink twice — we’ll save you. 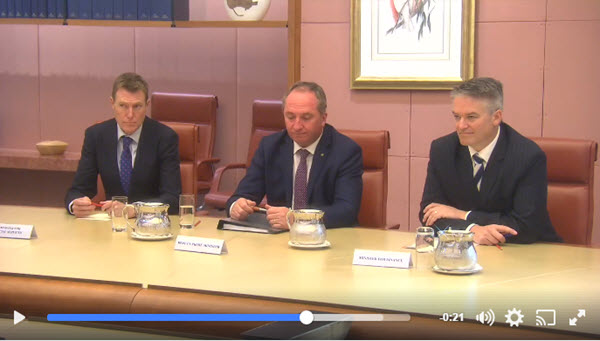 TAB’s ghoulish ad. We don’t often expect the best behaviour from betting companies that prey on vulnerable people in order to turn a profit, but we were surprised at this photo sent to us on Monday night. TAB used the death of football legend Lou Richards as a “sponsored” post on Facebook — meaning it paid money for its tribute to show up in people’s newsfeeds. While Richards was famous for losing bets made in his columns (resulting in wheeling Carlton’s Warren “Wow” Jones along Lygon Street in a wheelbarrow at one point), it still feels a bit off to try and make money off his passing. 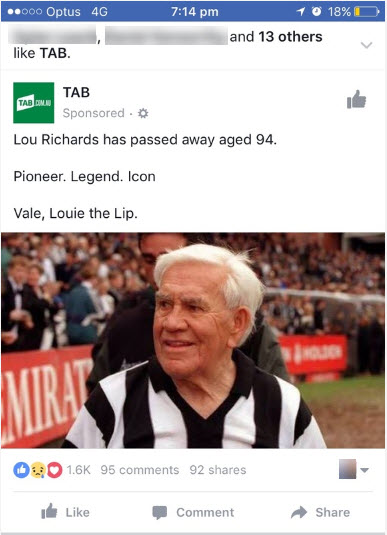 Buried on budget day eve? Sydney-based Ardent Leisure took the opportunity of the pre-budget fixation on Canberra (and rumours of a bank profits levy) to quietly reveal some bad news about losses for the year to June from its theme parks this financial year. That’s because contrary to expectations, visitor numbers and revenue have continued to fall following the fatal Dreamworld accident (last October) and Cyclone Debbie in late March and early April.

Ardent operates Dreamworld and WhiteWater World on the Gold Coast, said on Tuesday that performance so far this year indicated negative earnings for its theme park division for the full year of between $2 million and $4 million.

In April, Ardent said CEO Deborah Thomas said she would step down from the top post and will become chief customer officer and chief operating officer for Australasia on July 1, overseeing the revitalisation of the theme parks and Ardent’s AMF bowling centres.

Sum up SA. The state of South Australia is asking people to design a new T-shirt to represent the state. “Get creative and show us what South Australia means to you” reads the website for Brand South Australia, which is offering $2000 for the winning design. In the Crikey office we are sharpening our pencils, because there is just so much inspiration. Should it just be a few barrels, or the Rundle Mall balls? Senator Cory Bernardi’s face or just a big black square, inspired by last year’s power blackouts? Send us your  ideas.

Joe Aston calls another member of staff a D*&k head, that’s rich coming from someone who published details on the Amber Harris case, when there was a gag order on it in the first place. Which in his capacity as a “journalist” he would have been able to have found out very easily. tsk,tsk Joe…

That Talcum video was just toooo purrfect – talk about the canary that swallowed the cat!