Welcome to the Smage … pizza the action … mad as hell …

With no journalists, the Fairfax city metros have finally become a single paper.

Today in Media Files, Fairfax gives us a taste of what the future might be for its Melbourne and Sydney mastheads, with exactly the same budget coverage in the two papers. And Scott Morrison’s budget speech was not as popular for viewers as last year.

Spot the difference. Is this the future for Fairfax’s metropolitan mastheads? The front pages of The Sydney Morning Herald and The Age this morning are almost indistinguishable, apart from different headlines and some wording on the graphics. The same story by Age senior editor Mark Hawthorne ran on both front pages. 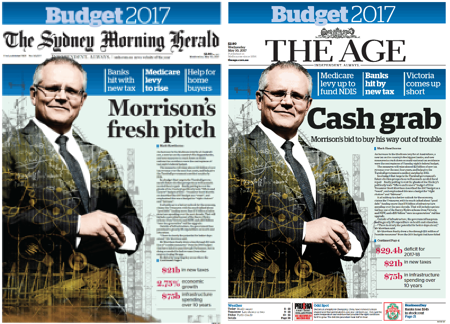 But of the papers, the front page had the most difference between the two papers. Only one headline was different inside the paper, with the other eight pages exactly the same — down to the one Melbourne and one Sydney case study.

The Herald missed Ross Gittens, who has covered 42 budgets. Gittens, along with Peter Hartcher, Tony Wright, Mark Kenny, Adele Ferguson, Peter Martin, Matt Wade and Jessica Irvine were all out on strike yesterday. Between them they  have the experience of covering 169 budgets.

They have returned to work today with their colleagues after a seven-day unprotected strike. The strike was to protest against 125 job cuts — a quarter of the metropolitan newsrooms — and other changes, including getting rid of state editors.

Inside the two city papers, coverage was limited to a few senior editors not allowed to strike — Hawthorne, Lisa Davies, Sean Aylmer and Domain’s Jennifer Duke — as well as wire copy, work by “staff writers”, the full text of Treasurer Scott Morrison’s speech, and analysis from veteran press gallery journalist and former Age star Michelle Grattan, who wrote the piece for The Conversation, which can be published under creative commons licence rules.

Budget night is pizza night. When the ABC crossed in to political reporter Greg Jennett last night for some analysis of the budget, the idea must have been to capture the buzz of the newsroom in the background. But we’re not sure it was the best place to leave the pizza. As Jennett walked through graphics explaining some of the headline figures from the budget, reporters were sorting through the pizza boxes and tucking in.

Budget not so popular with viewers. Scott Morrison’s second budget speech was not as popular with TV viewers as the 2016 version. Preliminary TV ratings for last night show that 1.074 million watched it on the ABC’s main channel and on ABC News (nee News 24). That was down from 1.146 million a year ago (May 3, actually —  it was a week earlier to allow the government to start that ooohhh sooo long election campaign).

The analysis afterwards featuring a cast of thousands and hosted by 7.30‘s Leigh Sales was watched by 951,000 all up on the main channel and ABC News. That was also down from 2016, when a total of 1.027 million watched. Once you had heard Barrie Cassidy’s (Insiders) answer to the first question about the politics of the budget (that it was a centrist budget and its success would depend on whether Prime Minister Turnbull could get it past his party’s right wing), there was no need to watch any more, especially after Annabel Crabb took ages to answer the second question. — Glenn Dyer

Ten woes hit Foxtel. Troubles at Ten have hit the bottom line of Foxtel, its 13.8% shareholder, in the March quarter, according to News Corp (which owns 50% of Foxtel). In fact, Ten’s net result fell to zero in local currency for the three months to March because of the impairment of the Ten shareholding and losses on the closing of the Presto streaming video joint venture.

That was on top of another fall in subscriber numbers in the quarter from a year ago and higher programming costs, according to News Corp’s quarterly report. The performance confirms why News wrote down the value of its 50% stake in Foxtel by $US227 million at the end of last December.

News said Foxtel’s net income was nil, compared to US$32 million in the previous year period, primarily due to US$21 million in losses related to Foxtel management’s decision to stop Presto operations in January 2017, and a US$14 million loss from the change in the fair value of Foxtel’s investment in Ten Network Holdings.

And News Corp’s 100%-owned cable operation, Fox Sports Australia, had a 14% rise in revenues (US$15 million) because of favourable currency movements (the US dollar fell against the Aussie in the quarter) and the purchase of Sky News last year. Despite that, earnings before interest, tax, depreciation and amortisation was flat compared to the March quarter of 2016 — US$35 million against US$34 million. — Glenn Dyer

Lib Dems find someone madder than Leyonhjelm. Exciting times, with Marky Mark Latham joining the Liberal Democrats. Dictators have been known to appoint to high office people shorter than themselves, so as to tower over them at official functions; David Leyonhjelm appears to have hired the one person who is perceived by the general public to be madder than he is.

Whether other members of a party of small government, property rights and negative freedoms will be as thrilled by the arrival of Latham as Leyonhjelm appears to be remains to be seen. Latham’s politics, these days, are the intellectual equivalent of setting fire to a paper bag containing a human turd on a doorstep, but for years he defined himself as a collectivist. Here he is in the Latham Diaries in 2001:

“Everything I believe in, everything I researched as a parliamentarian is in this speech: Reinventing Collectivism: The New Social Democracy … my most important work in the last three years.”

Latham goes on to note how collectivism was hijacked by big statism, and that a true collectivism should be equally opposed to big government, big corporations, etc, etc. In a collection from around the same time, Latham and others expanded on that vision. Title: The Enabling State.

Latham’s more recent burning-turd politics have a lot of ra-ra for the market in them, but he would appear to hold to at least some of that vision. Trouble is, the Liberal Democrats, by their very nature and constitution, don’t believe in an enabling state, any more than anyone believes in “enabling chemotherapy”. They believe a minimum state is a grim necessity, compared with the consequences of no state at all. They believe that big corporations are simply aggregates of people exercising their legal rights, and no problem at all. They believe that employment should be governed by master-and-servant acts. And so on. So how will this partnership go? Will Latham trash the good work he did do, in the name of his current, spectacular, punishing failure? Or will the LDP find that it has acquired a socialist left faction? In either case, Bob Carr’s remark on Latham’s accession to the leadership seems to be the go. It will be an interesting nine months. — Guy Rundle

Glenn Dyer’s TV ratings. Seven’s night in metro and regional markets, although Ten’s Masterchef Australia had a better night than on Monday, enough to pass Nine and claim second  place overall. MCA managed 1.33 million national viewers, ahead of House Rules with 1.29 million for Seven. Nine was left right out except for another reasonable night for the 6 to 7pm news and A Current Affair at 7 pm.

What was worth cheering was the collapse of the nasty relationship genre. Seven’s Seven Year Switch has been dying on screen week by week, but last night Nine debuted an even grubbier program called Last Resort and viewers turned away in droves. Last Resort could only manage 592, 000 viewers nationally, behind Seven Year Switch in the race to the bottom, which managed 782,000. In regional areas, Seven News again won with 682,000 viewers, followed by Seven News/Today Tonight with 564,000, Home and Away was next with 502,000, House Rules was 4th with 500,000 and The 5.30pm part of The Chase Australia was 5th with 457,000.

So will we see Idol back on Australian TV after the US network ABC won a short auction, overcoming a late bid from Fox? Fremantle, Core Media Group and creator Simon Fuller struck an agreement with ABC overnight.  Idol was killed off by Fox in 2016 after 15 seasons and it ran for seven seasons on the Ten Network in Australia from 2003 to November 2009. Singing contract programs are dying here. The Voice is still doing well for Nine this season, but is a shadow of its first and second seasons, The X Factor has been killed off by Seven and both Seven and Nine have had a crack at Australia’s Got Talent, and abandoned it. — Read the rest on the Crikey website

I look forward to an early fight between Mad Mark and Lyinhelm over who gets to wear the tin foil hat.