In an open letter to the Treasurer, economics reporter Alan Austin shows how Scott Morrison can announce a surplus in today’s federal budget and start paying back the bad debt he has been stacking on.

No point denying the obvious. Over the last 12 months, you blew it.

Here is where the budget will be this June, Scott, based on last week’s Finance Department March update:

Just appallingly disastrous. Much worse than June last year. You can blame your predecessor Joe Hockey for part of that deterioration. But not all. A lot of it is your failure to get the revenue up where it should be.

Non-essential spending will have to go. Start with travel and other perks for MPs and ex-MPs with their six-figure pensions. Close the offshore detention facilities immediately. Billions to be saved in one blow there. Then there’s plenty of fat to be trimmed from defence, general public services and handouts to the mining industry.

But where you and your colleagues have really failed miserably is on the revenue side. This is where you have to seriously lift your game. Column A shows where we will be this June. Column B shows where we need to be next year. Column C shows the percentage increase required. 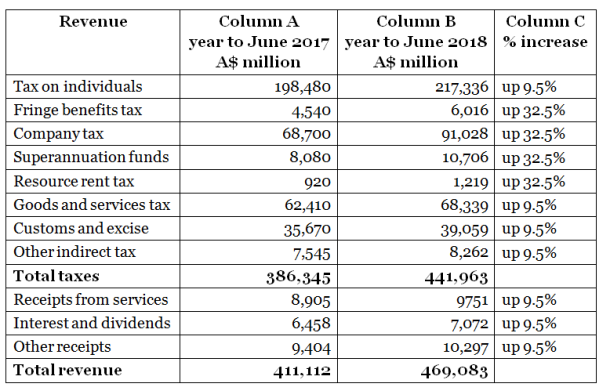 Most categories only need a 9.5% increase. You will easily achieve this without tweaking the rates at all, now the global trade and growth boom is well underway.

Tax from individuals has to go up 9.5%. You can accomplish this by cutting the rorts at the top end.

The great news is that you can slash company tax for all companies from 30% down to 23%. You just have to make sure companies actually pay the 23% — instead of the ridiculous going rate now of between 0% and 10%.

[Matthewson’s fantasy budget: back to basics]

Now, here’s the five-point plan to sell this budget — without losing any political skin. If you pull this off, and have that $21,000 million surplus to wave around this time next year, you will be in the box seat for re-election in 2019:

You are now paying more than $46.6 million dollars each day in interest on the net debt. Every day. That’s a rate of $17 billion a year.
Yes, there is good debt and bad debt, Scott. But virtually all of the extra debt you have added has been bad. Reducing it would be good.

The economy continues to tank under Moz, but don’t worry, it’s only hurting workers and the needy

Thanks Alan…we always get the correct numbers from you. Just explodes the myth that the Coalition are the best at managing the economy.
Wonder why we never see anything like this in the MSM???!!

How ’bout applying for the treasurer’s gig Alan? This is why the pollies really shouldn’t be in control of the treasury, it should be done by people that actually know what they are talking about & the countries books wouldn’t be in such a state. This is the problem with politics & local government, they spend too much time trying to raid the piggy bank, with no one who is willing or able to say NO, they think it’s ok to keep ripping/off taxpayers/ratepayers, & then expecting people to work themselves into the ground to continue supporting the life these pollies/council members have become accustomed to.

Why is a failed tourism spruiker deemed fit to be Treasurer? Or any politician for that matter – I thought that was why we paid bigbuck$ to experts in the civil service.
The only talent a politician, Talcum excepted, has is to be glib & convincing whilst being utterly mendacious, ie when their lips move.
Let them sell/promote what experts formulate but please keep them away from the details where they can, and do, create real havoc.