There are very few journalists working at The Age and The Sydney Morning Herald this week, so how has Fairfax management filled its pages?

When Fairfax journalists walked out last week on their wildcat strike, boss Greg Hywood declared that the papers and websites would continue to publish as usual. And they have — sorta.

Despite some clangers, like the front-page headline spelling mistake we saw in The Sydney Morning Herald on Friday (“economy”) and a mealy-mouthed apology in Saturday’s Age and Sydney Morning Herald informing readers that some usual features would be missing, every edition has been printed.

There are some well-worn strategies for filling the pages when staff go on strike, after the pre-filed copy runs out. Fairfax editorial managers have some experience. Journalists went on strike on in March last year for three days due to a plan to cut 120 jobs. In 2014, journalists and photographers went on strike for 24 hours to protest against cuts to photographers.

Step One: Put the editors to work.

Managers, section editors and international correspondents are exempt from the strike action, and they have still been working. So instead of editing the paper and their sections, they have been pulled back into action writing yarns.

Senior editor Mark Hawthorne and BusinessDay editor Mathew Dunckley have been prolific in filling the gaps, as have correspondents Jewel Topsfield, Lindsay Murdoch and Paul McGeough.

Step Two: Bring out the holders.

Every newspaper has stories in the queue for slow news days. Stories filed before the strike started on Wednesday afternoon have been trotted out all week. Neelima Choahan’s front-page story on Friday was one such yarn: 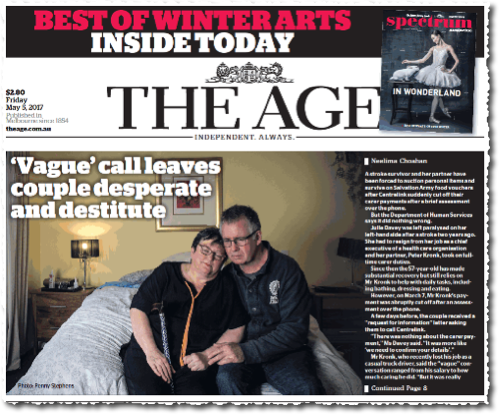 Step Three: Step up the syndicated and wire copy.

The Sydney Morning Herald and The Age have well and truly got their money’s worth for their subscription to wire service AAP this week, even if just for the sports coverage. The Saturday Age almost entirely ran wire copy in its sports section this week, using half as many pages as the previous week.

All five stories on pages 4 and 5 of yesterday’s Sydney Morning Herald, including the front-page spill, were from AAP, as were all but one story on the same pages today.

And while syndicated copy from international papers has been become more common over the past few years, it’s really come into its own in the papers this week. Stories from The Telegraph in London, The Washington Post and The New York Times have all featured in early news pages as well as the world section.

There are fewer journalists at the Australian Financial Review on strike, and the SMH and Age are also using bylined copy from Fin writers to fill the pages.

On Saturday, The Age ran a local story from suburban paper Star Weekly about Wyndham City Council on page 2.

Step Five: Scrape the very bottom of the barrel.

When all else fails, republish old articles and drafts.

Yesterday’s My Small business section of The Age and Sydney Morning Herald published two stories by the editor of the section, Cara Waters, who is on strike with her colleagues.

One of the stories, about the downward trend in selling small businesses, was first published online back on April 27, and it appeared as the section lead yesterday in both papers.

Below it ran what Waters said she had only written as a draft — a budget wish list for some small business owners. 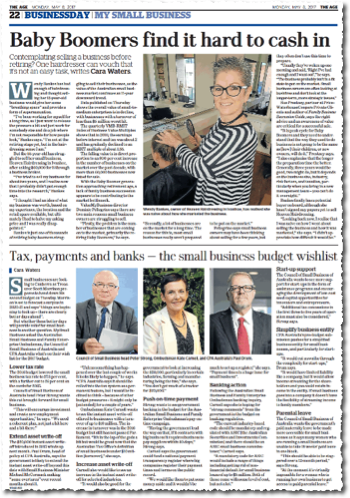 The same holds for cartoons. David Pope, also on strike, tweeted that his (dated) cartoon from budget time last year ran in the Canberra Times on Sunday to fill a gap left by the strike: 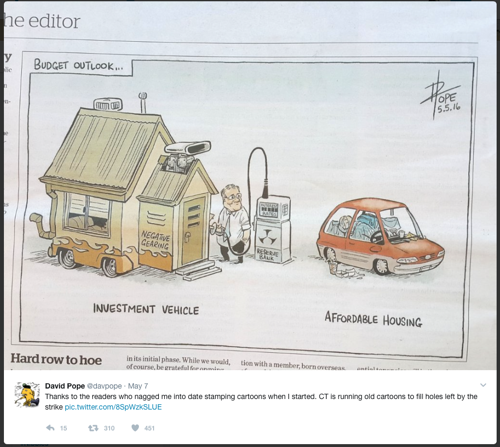 Today is the last day of the strike, with staff returning to work tomorrow.

We read the strike papers so you didn’t have to

If ever you needed more evidence that ‘journalism’ has been lazily allowed by its practitioners to come to be defined mostly by its medium, rather than its message, it’s this. Any old bugger can bang out a major metro daily.

The real risk when information value-adders – vocational reporters and journalists, artists, academics, pretty much anyone in the KPI sectors – go on strike is that…no one will notice, because their value-adding has become dubiously hit-n-miss at best, non-existent at worst.

I can add an example of my own. An obituary for folklorist and historian Hugh Anderson I co-wrote some weeks ago with his son, Warwick Anderson, a historian of medicine, was published online before the strike and, I’m told, also appeared in the print editions of the SMH and Age yesterday.

Step 6: Trot out columists that would not go on strike because it is an anathema to them (Amanda Vanstone) who then like the conga line of he bretheren (conservatives) have yet another go at Yassmin Abdul- Magied. Click bait. (And I’m not the young bloke who tried to shoot Trump, even though I’m in complete agreeance that he is a complete fuckwit)

Err, Emily, your helpful suggestion seem to be the way Fauxfux has been running for at least the last decade – hence the abysmal sales slump.