Waiting on a miracle in a phone-free journo cage

You want to know what it’s like in budget lockup? It’s a lot of waiting. And a lot of typing. And some lucky souls, who are not your correspondents, get sandwiches.

Budget day is a day of waiting. For your Crikey correspondents it starts at Melbourne airport before heading to the nation’s capital, reading the pre-budget papers and playing journalist celebrity spotting. It is slim picking this year, though, with no big Fairfax names like Adele Ferguson or Tony Wright heading up to analyse the budget. But there is a little star power on our flight — former Queensland premier and current Australian Bankers Association chief Anna Bligh is also making the commute from Melbourne. While news outlets across the country will be plastered with budget coverage tonight, the process to get to such a point can be as ugly (and sometimes as boring) as making sausages. Journalists, lobbyists and sometimes Real Housewives descend on Parliament House to pore over budget papers and try to work out exactly what it all means.

The waiting continues as journalists mill about waiting to check their names off and hand their phones in, committing to keep the information to themselves until 7.30 or risk two years in jail. For an industry that is mostly surgically attached to smartphones, waiting without one is discomfiting. You have to actually talk to the people around you (which is great, I promise). Then finally we are in the room, with cute canvas bags full of budget papers, making our way to our assigned seats.

News Corp’s mammoth team fills upstairs rooms, with an impressive catering spread. Sweet pastries, wraps, and tray upon tray of food are barely touched when your correspondent wanders through just before 3pm. The journos are just gathering for the editorial meetings to discuss how to tackle the “right choices” being made by Treasurer Scott Morrison, so perhaps the hungry work hasn’t yet started.

Although the news coming out of Channel Ten has been dire recently, they’re not on the bread line just yet — there is pizza and Subway catering throughout the afternoon. There are spare seats in the main committee room, so perhaps we could have fit the pesky student journalists who had been barred by the Treasurer after all. It’s also a day of waiting for the public servants locked in to mind the unruly journalists. Early in the day they seem desperate for a journalist to bother them with a question about the minutae of policy announcements, but as the hours wear on their patience wears thin.

Just as the government always finds a new way to sell its increased budget deficit, AAP’s Lisa Martin finds an ever-more creative way to bake a budget-themed cake. This year’s effort was a purple unicorn, in homage to ScoMo’s promise that he wouldn’t sell voters a unicorn. 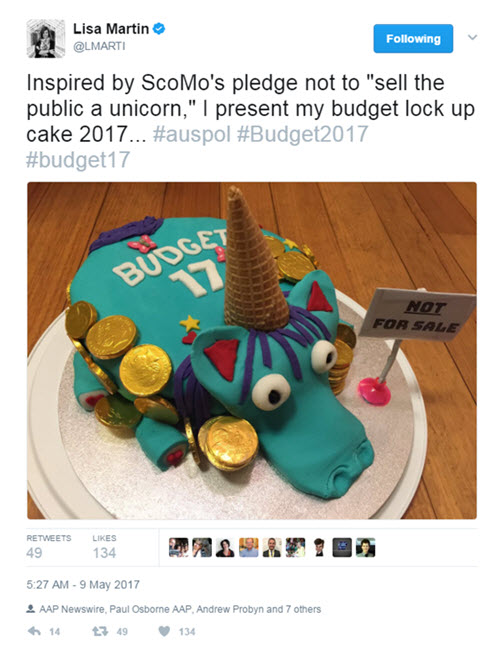 A few hours in, and we’re back to the waiting. The Treasurer’s press conference is scheduled for 4pm, and as we wait outside the committee room set aside for the purpose, we’re told it’s been pushed back to 4.20 (ScoMo actually rocks up at 4.35).

This year reporters are told they don’t need to go to the press conference themselves but can watch it on a screen from another room in the lockup – it looks like not many actually take that option, with many standing as seats seem to be in even more limited supply than usual. It’s not surprising that few would give up their chance to ask a question by sitting in another room. There isn’t even a seat for Finance Minister Mathias Cormann, who looks on as Morrison spoke in a kind of proud father-at-graduation way.

If Morrison is late because he was spending time working on his jokes, well, he probably could have used a bit more. On the topic of the Future Fund, he said that Peter Costello was running a tight ship. “I know because he told me.” To the silence that followed, Moz intones: “I’m joking, lighten up.” And a graph going back to the 1980s is described as “the mullet years”. Oy.

The questions come from the AFR’s Phil Coorey (one of the few Fairfax journos in the room), the Oz’s David Crowe and Sky News’ Samantha Maiden. The ABC’s Fran Kelly gets a few in, and The Daily Telegraph’s Sharri Markson asks if Morrison expects backlash from his own colleagues on dumping the 2014 budget measures that hadn’t passed through the Senate, and if they have broken the news to Tony Abbott and Joe Hockey yet. The question is swatted away, but we’re sure Abbott will have some helpful comments within the next 24 hours.