Hywood arrives in style ... scaremongering in Brighton ... Bernardi all alone ...

Hywood’s ‘Ferrari Maserati’. It’s been a big few days for Fairfax — first the journos went on strike in protest against $30 million in job cuts, and then it was revealed over the weekend that private equity firm TPG had made an unsolicited offer to buy Domain along with the company’s metro mastheads. While there are still skeleton staff on deck in Sydney, we like to think they have a sense of humour. Online reports on the Fairfax board meeting to review the offer posted over the weekend broke up the monotony of stock photos with an image of CEO Greg Hywood rocking up in his blue Maserati Ghibli — worth around $140,000. 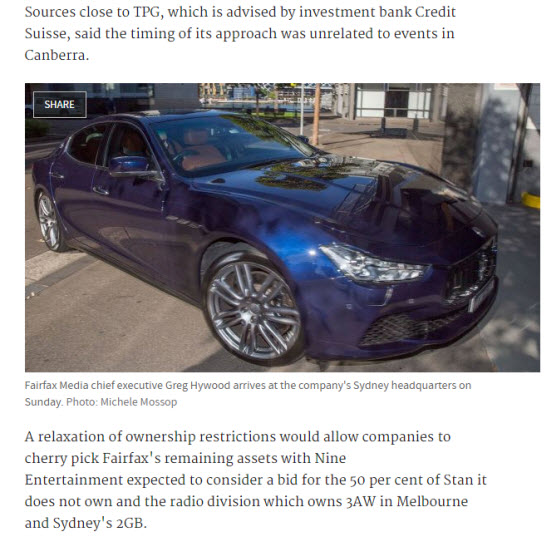 That’s the same Maserati Hywood purchased in 2014, and that The Australian‘s then media diarist Sharri Markson called a “Ferrari Maserati”, which is not actually a car.

Cop that. The use of the Medicare logo by the Labor Party during last year’s federal election campaign was a massive point of contention for the Liberals, with concern that people could be confused by text messages purporting to be from “Medicare”. The same theory doesn’t go both ways though, with soon-to-be Victorian MP James Newbury using the Victoria Police logo in a mailout to residents in Brighton. Newbury will take over the safe blue ribbon seat after the retirement of Louise Asher at the 2018 election, and he has already got on top of scaring residents in the leafy beachside suburb with a newsletter about community safety, which at first glance looks like it comes from the police.

On further inspection, the survey is actually from the Liberals, and it is a chance to have a kick at Victorian Premier Dan Andrews. 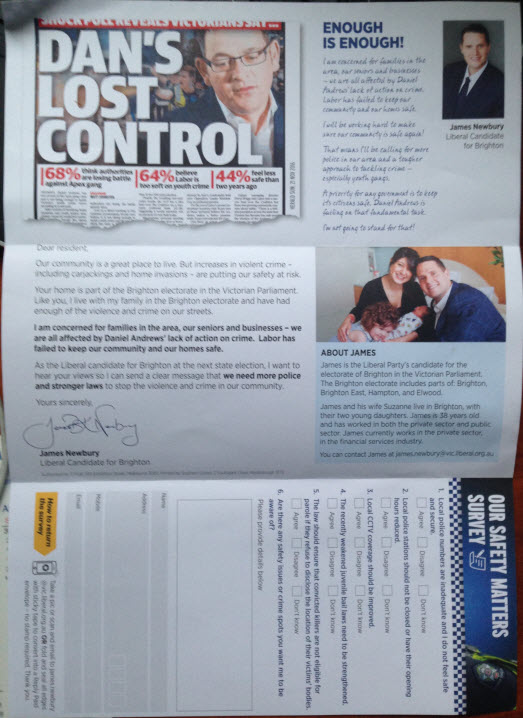 Our tipster was not impressed:

“The liberals complained bitterly about labor using Medicare logos, but seem very happy to use police branding for push polling and campaigning, not to mention increasing fearfulness in the community.”

Dami Im to headline Midwinter Ball. After awkwardly claiming this morning he hadn’t seen an “Australians First” campaign ad that he — and lots of other white people — featured in, Opposition Leader Bill Shorten was back in the press gallery in Parliament House today to launch the annual Midwinter Ball. The ball often cops criticism for being an off-the-record event for politicians, sponsors and the press gallery to hobnob, but it has raised millions in funds for various charities over the past few years. This year’s charities include the Stroke Foundation, the Alannah and Madeline Foundation, Share the Dignity, and Lifeline.

Press gallery president (and currently-on-strike Fairfax photographer) Andrew Meares joked it would be “an Australia First ball. Border Force will be on the door so you better bring your passport, your white skin and blond hair.”

Shorten said the theme would be Bush Capital in a hope that Barnaby Joyce wouldn’t decentralise the press gallery. Shorten will be there for his fourth Midwinter Ball — or as, he joked, Fairfax’s current subs would call it — “the Mumwanter Ball”. The entertainment for the night will be Australia’s runner-up in Eurovision last year, Dami Im. Shorten joked that some of the items up for auction would include Pauline Hanson’s plane, and a “very generous donation” from Prime Minister Malcolm Turnbull. “You’ll find out about it in 12 to 18 months.”

Bernardi all by himself, don’t wanna be … Cory Bernardi, the fourth most talked about Australian politician without a ministerial portfolio, took to Sky’s Outsiders on Sunday to complain that he was being ignored by the mainstream media since ditching the Liberal Party (does Bernardi not see the irony in making such a complaint on a show that tens of people watch?). Another comment that caught Ms Tips’ eye was Bernardi’s complaint about the “termites” who had undermined core Liberal Party values during his time there. Said Cory:

It is just as well that Bernardi is based in South Australia, where clearly this malaise hasn’t spread. During his decade as a Liberal party senator, he initiated “discussion and debate” by being at odds with his party over: Islam, the “link” between homosexuality and bestiality,  domestic violence, the death of refugee toddler Alan Kurdi, his outspoken criticism of the party after they were the first majority government to lose a lower house vote since 1962. It’s a good thing he was free from that “closed shop” mentality all those times, or he might have been thrown out, rather than being able to just choose to leave after using the Liberal Party to secure a six-year Senate term.

Bernardi has just found out he was only interesting to the media while he was inside the Liberal Party trying to cause problems for the party’s leaders.

As of this minute the Ferrari Maserati is my favourite car. Another News Corp exclusive.