How do you turn a boring pre-budget speech by Scott Morrison into fun clickbait?

Today in Media Files, Treasurer Scott Morrison does a bleeping good interview with Laurie Oakes, and the TV law changes no one’s talking about.

Did ScoMo swear on national TV? Spoilers ahead. It’s not often a pre-budget interview makes for good clickbait. But when a word from Treasurer Scott Morrison’s response to a question from Nine’s Laurie Oakes was beeped out yesterday, some websites just couldn’t resist. 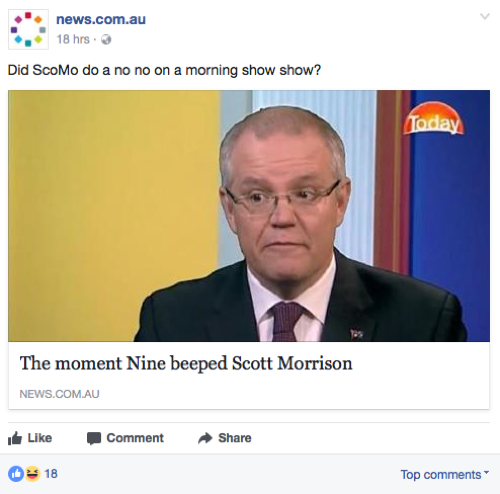 Even The Australian — which takes any opportunity to have a dig at Fairfax’s low-brow website clickbait — ran the story on its website, wondering if ScoMo really did swear on TV.

Spoiler alert — the Treasurer did not swear on telly (the offending word was “focused”). Nine said the bleep was a technical glitch.

The media law changes no one’s talking about. There’s a fiddle in the media laws that everyone is keeping quiet about — in fact, there are two. First up there’s the great big lie abut the crackdown on sports gambling ads. It is nothing of the sort. The second is the quiet “review of Australian and children’s content rules”, which is the big story from the changes — it is the one that will generate the most return for the two years of lobbying and whining (billionaire moaning is oh so terrible, like a foul wind in a graveyard).

The gambling ad changes were to win over Senator Nick Xenophon (from now on known as “8.30pm Nick”). These changes will not stop gambling ads appearing in sports broadcasts. The media companies will not drop much revenue at all. In fact, over time there will be no changes and broadcast media companies (including the very needy Fox Sports and Foxtel arms of the Murdoch empire) should be able to generate more revenue because there will be greater competition for a more compressed group of time slots — two hours at most against up to three and a half hours previously.

The key part of the gambling ad changes calls for ads to be banned from five minutes before the start of a live game to five minutes after the conclusion of play or 8.30pm, “whichever comes sooner”.

Watch for the timing of games played in the evening to change (and for more games to be moved from day time to evening coverage). Watch also the first innings of a 20/20 game finish at the same time, or NRL games to reach half time around 8.30pm and have a longer break. And watch their gambling sponsors and partners (Ladbrokes, 365Bet, Sportsbet, William Hill etc) structure mobile/online gambling products on top of the normal ones based on full games. It will not stop odds being advertised in foreign sporting contests at night — cricket tests from the UK for example, or the English Premier League Soccer, or the IPL cricket in India.

Horse racing and lotteries are exempted, so that is a win to Seven and Kerry Stokes because of their free-to-air racing channel, and the intense coverage of racing carnivals, including the Melbourne Cup. Seven also broadcasts lottery draws.

So what will happen is that the networks (except the ABC) will not be required to produce any more children’s programming and screen it, and instead the ABC will get more money from the taxpayer to do this, with the networks making a small contribution to a children’s TV fund to help it happen. This is more to do with freeing up time on the digital channels in the early morning and late afternoon (for extra ad revenue).

The quid pro quo will be more money for local production and a modest contribution to a fund, with taxpayer support, to make children’s TV programming for free to air TV. The extra money from the abolition of licence fees has gone to maintain debt repayments, pay staff, dividends where possible and produce some content that would have been funded anyhow if it rated well. In other words, it will be yet another cynical raid on taxpayers to finance the fortunes of Kerry Stokes, Bruce Gordon, the Murdoch clan and the managements of the various TV companies and those wannabes in production (such as ITV and Endemol Shine, which is half owned by 21st Century Fox). — Glenn Dyer

Leaps of illogic in Leyonhjelm’s News Corp support. We’ve all come to expect the increasingly shameless way in which The Australian promotes the commercial interests of its News Corp masters, but today’s edition of the weekly “Media” section sets a new low.

Chief Parliamentary Nincompoop and Liberal Democratic Senator David Leyonhjelm is given prominent comment space to parade a disjointed argument that manages to conflate a sequence of shop-worn attacks on the ABC with the tired old News Corp campaign to abolish the TV sport anti-siphoning list. (Anyone with even a light understanding of this issue knows that the financial health of the Murdoch pay TV interests in Australia relies primarily on the ability of its sports channels to sell Foxtel subscriptions.)

“Too few people have Foxtel,” declares the Senator, “because the government limits what Foxtel can offer.” Too few? By whose measure? And clearly 29 channels of sport on Foxtel (by today’s count) is still not enough for the Liberal Democrats.

But then comes an even grander leap of illogic. If only the government would allow Rupert to buy more TV sport, Leyonhjelm claims, then “this would mean more Australians could rely on Sky News, rather than the ABC, for comprehensive news coverage”. And why would this be a good thing? Because, “Sky News, and Foxtel generally, also need to be unleashed in the competitive and cultural war with the soft-left ABC”.

Is that the sound of knuckles we can hear being dragged along the parquetry floors of Parliament House? — David Salter

Fairfax changes lockup line-up. Fairfax has scrambled to have a B-team approved to attend the budget lockup tomorrow. Press passes for access to the lockup had already been approved when staff walked out on a seven-day wildcat strike on Wednesday. All reporters who attend the lockup must be approved by the Treasury Department beforehand. We understand Treasury has approved changes to the lineup of Fairfax staffers who will attend.

Meanwhile, striking journalists from Melbourne and Sydney are road-tripping to Canberra to give a press conference this afternoon outside Parliament to explain their absence from the lockup tomorrow.

Death by paper cut. As Fairfax cuts editorial staff in what it says is its only option, and private equity fund TPG is floating the idea of buying the biggest Fairfax mastheads, the death of newspapers around the world marches on. In the US, corporate newspaper chains are buying off small newspapers while shedding staff (including from the small paper that won a Pulitzer Prize this year). On Medium, the executive director of LION publishers Matt deRienzo writes about the impact companies buying off newspapers have on the content:

“But it raises some big questions about (the) companies who are in the journalism business but are primarily driven by the short-term profit goals of shareholders or hedge funds. They own hundreds of local newspapers that have been vital to their communities  —  in the past, at least –  but whose journalistic vitality or very existence is not necessarily important to, or even part of, the business plan or ‘exit strategy of their owners.”

Grand mufti settles defamation claim against Daily Telegraph. Australia’s grand mufti Dr Ibrahim Abu Mohamed has won a defamation claim against News Corp Australia over two articles published in The Daily Telegraph. One of the articles showed him as an “unwise” monkey, and the paper also suggested he had not condemned the 2015 terrorist attacks in Paris. The case was settled by agreement with News Corp on Friday in the NSW Supreme Court, in Mohamed’s favour under confidential terms.

Glenn Dyer’s TV ratings. A closer night, though Ten’s MasterChef failed to make much of a mark (a fraction over a million national viewers) and was well topped by Nine’s The Voice (1.56 million). Seven’s House Rules delivered a solid 1.33 million national viewers — but only 799,000 in the metros (still ahead of Masterchef with 767,000).

And that was the tale of the night. The latest episode in Grantchester on the ABC at 8.30 pm (902,000) shows the Brits do nostalgia better than we do. It was a bittersweet story combing racism, the Luddites of the Church of England, normal human needs and emotions and the stultifying post-war mores of Britain. And the repeat of Inspector Banks was a reminder that the Brits also do contemporary crime shows better than anyone else. In the morning Insiders, with 513,000 national viewers, again underlined the futility of federal treasurers giving  their pre-budget set piece interview to Channel Nine’s lower rating Weekend Today Show with 369,000 nationally (even if the interviewer was the master himself, Laurie Oakes).

The A-League final last night (won by Sydney FC) was watched by 275,000 on Fox Sports and 253,000 on delay on SBS Viceland — that’s reasonable audience of 528,000 all up. The post match presentation had a sharp jump in viewers to 460,000 on Fox Sports and 349,000 on SBS Viceland.  That was 809,000 viewers for the post match heroics, due to the tense penalty shoot out (two great saves by the Sydney goalie) and ran into the time slot for the post game show. — Read the rest on the Crikey website

“The Leyonhjelm Bitch and the Wardrobe – brought to you by FUX News”…. he sounds like a Trumpette – whining over the ABC/”fake news” : while pimping Rupert?