Despite Peta Credlin's claims, Tony Abbott's "woman problem" was real. And Turnbull is, on the whole, more popular with female voters.

As Prime Minister Malcolm Turnbull steps up his efforts to recover the political initiative ahead of Tuesday’s budget, Tony Abbott and his advocates are rarely allowing a day to go past without some kind of effort to deprive him of the necessary oxygen.

A particularly audacious entry was made on Saturday by his former chief-of-staff, Peta Credlin, writing in her regular weekend column in the News Corp papers.

Credlin’s high visibility and, some thought, excessive influence during Abbott’s prime ministership was of little use in relieving him of what most identified as one of the heaviest weights in his saddlebag, namely his ruinous unpopularity among women.

In defiance of the conventional wisdom, Credlin sought not just to dispel the “myth” of the Tony Abbott “woman problem”, but also to argue that the charge could more properly be levelled at his successor.

The implications of Credlin’s claim run well beyond the small matter of the Turnbull-Abbott rivalry, as gender has been the most volatile demographic element in the federal electoral equation since the knives came out for Kevin Rudd on June 23, 2010.

As Paula Matthewson observed in Crikey on Tuesday, Credlin’s charge hung upon the thin thread of a solitary data point from the Australian Election Study, a post-election mailout and online survey that has been conducted by the Australian National University after each federal election since 1987.

What’s more, the claim that primary support for the Coalition among women slumped to an unprecedented 35% at last year’s election is at odds with the raw data from the survey, which actually had it at 43%.

Efforts to weight the results to balance out the non-representativeness of the sample presumably explain the discrepancy, but when data are weighted so heavily as to produce such a dramatic change, there is all the more reason to doubt their accuracy — particularly when the results are contradicted by other sources.

That this is indeed the case is illustrated by the charts below, derived from extensive polling conducted by Newspoll, Nielsen and Ipsos. 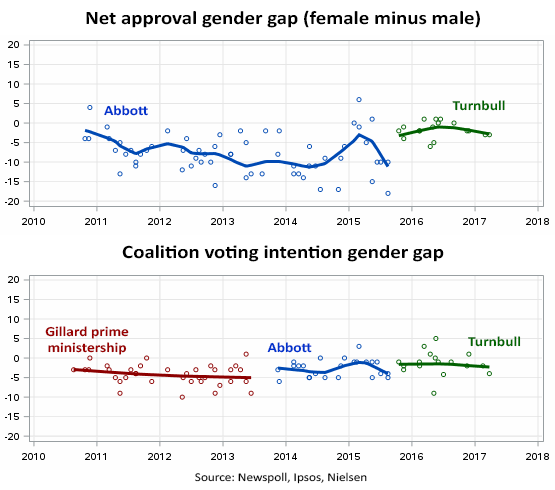 So far as the leaders’ net approval ratings are concerned, the pattern is unmistakable, with Malcolm Turnbull rating only slightly worse among women than men, compared with a differential for Abbott that at times entered double figures.

The only disturbance to the picture is a short-lived narrowing after Abbott’s own goal with the Prince Philip knighthood on Australia Day in 2015 — either reflecting the fact that women are more supportive of the monarchy than men, or simply that Abbott had less support among women left to lose.

On Coalition voting intention, a 5% gap that prevailed through the Gillard period roughly halved following her departure, then halved again when Abbott was out of the picture.

So while some residue of the Coalition’s soft performance among women over the present decade remains, Credlin’s attempt to invoke equivalence between Turnbull’s “woman problem” and Abbott’s is hard to credit.

Furthermore, her apparent assumption that the issue is entirely a matter of party room gender balance feels very much like the perspective of a beltway insider.

Had Credlin probed into the Australian Election Study’s findings on election issues, alternative explanations may have suggested themselves.

In particular, the most salient issue for women was health, which was rated extremely important by 75%, followed by education at 64%.

In both cases, women heavily favoured Labor as the better of the two parties to handle the issue, by margins of 61-39 in the case of health and 63-37 for education.

Credlin already has a credibility problem prior to this foolish claim about Abbott’s popularity.

This is the same person who brought us the carbon ‘tax’ which she recently admitted was never a tax & they knew that at the time. Ergo, we can expect somewhere, someday, to hear her deny the extent of Abbott’s approval by women.

As Mandy Rice-Davies once said, re lying to protect arses, “Well, they would, wouldn’t they?” so it is no surprise that the Kredlinator claims black is white – she rarely lets an opportunity slip to regale hapless listeners with her alt-fact that the Clown Prince “is by far the most popular politician in the country”.
How much can a koala bare, before being put out of sight?

No. Turnbull is not more popular with women. Indeed, women are very discerning, and generally loathe the insincere, egotistical Turnbull.

That same logic applies to their assessment of Abbott. It’s simply a matter of who they find more loathesome.

I suspect that the issue of gender representation would matter less if it didn’t lead to poor policy in matters that women care about very strongly.