Abbott hates losing. “Australia is the world’s 12th largest economy,” Tony Abbott said yesterday. Erm, yeah, nah, Tone. We’re the 13th largest economy, according to your own government’s website. We were the 12th largest — we reached that point when Wayne Swan was treasurer, in 2012. Sometime, around 2015, when Tony Abbott was prime minister, we slipped to 13th when South Korea overtook us. We can understand why Abbott would not have wanted to draw attention to Australia slipping back on his watch, but it’s nothing to be ashamed of — we’ve been 12th before and lost that spot — in fact, we were 11th in 1983, but slipped back under the mighty Hawke government. And anyway, 13th sounds cooler.

Ombudsman job goes to department management. Just after the Commonwealth Ombudsman announced last week that there would be an investigation into the AFP’s illegal access of a journalist’s metadata, blogger Stephen Murray reports that the Turnbull government has decided to appoint the deputy head of the Department of Immigration and Border Protection, Michael Manthorpe, as the new Ombudsman. The decision brings to an end 40 years of successive governments not appointing someone from the senior bureaucracy to the job.

It’s not exactly a controversial political appointment, but what will Manthorpe do if he is asked to undertake an investigation into his former department?

No turnbacks lately, but boats still coming. The Department of Immigration and Border Protection has said between October 2016 and February this year there were no turnback operations, but at least one attempted unauthorised departure from Papua New Guinea so far this year and seven attempted unauthorised arrivals last year from PNG. The government is still spending up on advertising against people smuggling, however, stating it has spent close to $1 million between Google and Facebook on anti-people smuggling campaigns.

Memes for Bernardi? If you’re good with computers and are interested in winning the culture wars for the hard right, you are in a growth industry. Anyone unsuccessful in applying for Mark Latham’s “IT experts” role has a new option, as Cory Bernardi’s Australian Conservatives are hiring a digital communications officer. The role has the objective to “develop, execute and manage the marketing communications and promotional activities related to [Bernardi’s] role as a Senator for South Australia” and requires (naturally) “a strong work ethic and an even stronger sense of humour”. Will Bernardi be the first conservative to “get” memes? Somehow we doubt it.

Under the enterprise agreement that covers senators’ staff, the salary for “personal employees” ranges from roughly $48,000 to just over $135,000, and the employer has broad discretion to appoint new staff members at “any salary point within the classification … based on the on the demonstrated and relevant skills and experience of the employee”.

In late 2015, Prime Minister Malcolm Turnbull allowed independent senators funding for an extra staff member each (up from six to seven). As Bernardi is no longer a backbencher, he is also allocated seven staff, and he has control of funding and infrastructure that formerly belonged to Family First, so expansion is on the cards. 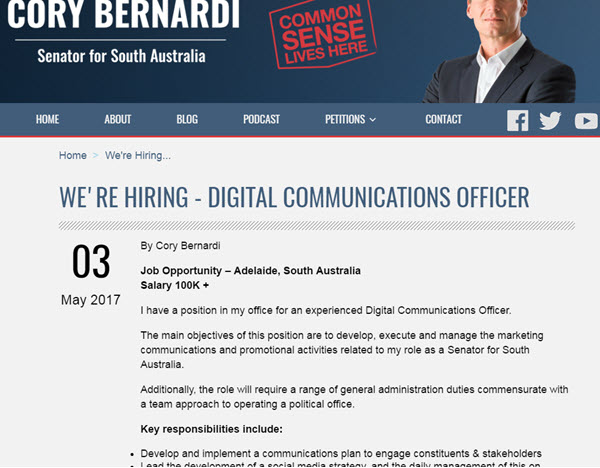