Including also, scenes from a bong-throwing competition.

Who would have thunk it? A few years ago, who would have thought that backwater New Zealand, and religiously rigid Ireland, would allow same-sex couples to marry before Australia did?

Who would have thought that several states in the US would be legally selling recreational marijuana commercially before we did?

On that one, I was decades out. Back in 1969, as a foreign correspondent in New York, I was asked by Fairfax to write one of those prediction pieces about “What will Australia look like at the end of the ’70s?”

Hinch’s Hunch was that by 1980 pot would be legalised in Australia. It wasn’t wishful thinking. I was living in the “anything goes — let it all hang out” Swinging Sixties. Written stories about Flower Power. Been to Haight-Ashbury. But I didn’t smoke pot. Never did. Never will. Didn’t even try the cookies. Booze was my drug of choice — and it was legal.

I’m going down that track today because this weekend I’ll be at Australia’s Pot Paradise: the MardiGrass in Nimbin.

Last year, as a novice senatorial candidate, I went there to support the campaign for medical marijuana — for legalising cannabis oil.

(One of my last stories for Sunday Night, before I jumped the shark, was about the miraculous effects cannabis oil was having on long-suffering spasming children. And why parents were risking jail to provide it.)

That was why I was there taking part in a bong-throwing competition (I came last) shouting “Free the weed!”, and leading the parade with a bare-bellied pregnant woman (pictured below) who displayed a marijuana leaf on her tummy. 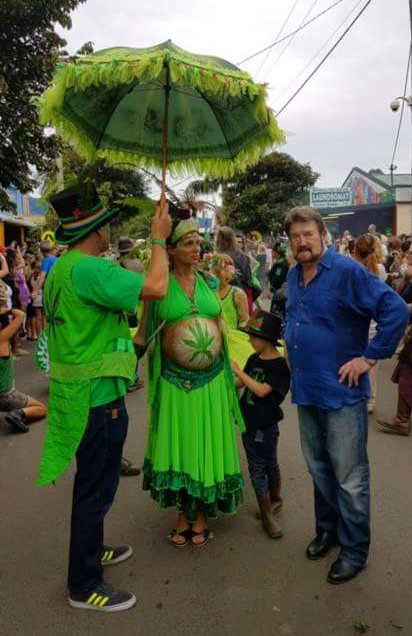 And for those people, shocked that a mother-to-be, who looked like the baby was dropping that afternoon, was a pothead: the pregnant woman was not a user. She was there with her husband and two other children because “if usually conservative people like me don’t get out and protest about legalising medical cannabis, the politicians will never listen and nothing will happen”.

That’s why I’ll be back there at the weekend.

I have used this quote before from the hero of Changi Prison, Weary Dunlop. His statue stands on St Kilda Road across from the building we have acquired from the Turnbull and Andrews governments for the new Australian National Veterans Arts Museum.

The Dunlop quote: “Get men working at arts and crafts in the hospital thereby helping them acquire an interest in life.”

That’s why, on Anzac Day, we were at an exhibition of veterans’ paintings and sculptures at a Collins Street gallery. To demonstrate this “interest in life”, especially for vets with PTSD.

And remember this statistic. More than 30 veterans have ended their lives in Australia this year. Number 31 was on Anzac Day. The year is only four months old.

On a light weekend across the ditch, I did some heavy reading — Chrissie Foster’s harrowing book Hell on the Way to Heaven. The ghastly story of what happened to her family after two of her young daughters were molested by the evil Father Kevin O’Donnell at a Catholic girls’ primary school.

Last week, I had spent time with Chrissie and her indefatigably resolute husband, Anthony, as we dissected the national redress plans and what will happen after the royal commission into institutional abuse brings down its final report at year’s end.

I share the Fosters’ concerns that the government will go soft on recommendations — if their reaction to the delayed released of last year’s interim report is any indication.

You will be kept posted.

Apropos of nothing, maybe, a Kennedy story has floated to the front of my political memory bank because of the increasingly bizarre pronouncements coming out of the mouth of The Donald as he celebrates (?) his first 100 days in the White House.

I’m still trying to get my head around Trump’s take on the American Civil War and his claim that president Andrew Jackson — whose portrait Trump has moved into the Oval Office — was really angry about the Civil War and how it could have been avoided.

Forget that Jackson died 16 years before the first Confederate bullet was fired.

Anyway, the quote surfaced during the Nixon presidency, after stories started to surface about JFK’s infidelities.

“At least what Kennedy did was with consenting American women. Nixon did it to a country.”

Entertaining insights once again Derryn, keep up the good work. Particularly liked the quip about Kennedy. Reminded me of one I heard doing the rounds in the early 1980s while living in London: “says Ronald Reagan of Margaret Thatcher-gee, I’d love to do to her what she is doing to her nation!”