The Australian can't make up its mind. And Cory Bernardi has a problem with university education.

Today in Media Files, the Oz flip-flops on whether fast diets work, and the Golden Tonsils shares his secrets with Leigh Sales on last night’s 7.30.

To fast or not to fast? A report published on The Australian‘s website on Tuesday told us what some may have already suspected: the fad 5:2 diet doesn’t actually work. But perhaps before publishing the story, syndicated from UK paper The Times, someone should have read Friday’s paper, when another story from The Times was published in the Oz: 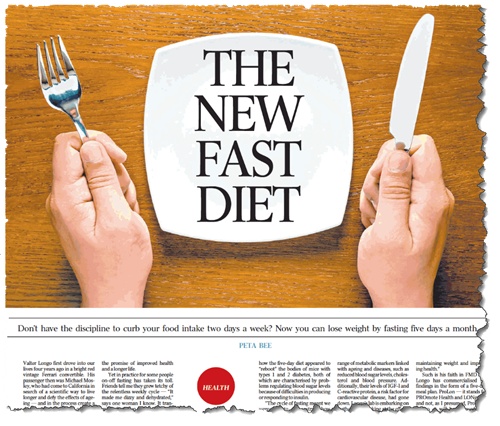 The earlier article describes a new, better version of the 5:2 diet, where you fast for five days a month, instead of two days every week. According to that article, fasting is a very effective way to lose weight.

“It is in essence a cheat’s fast, which involves cutting your calorie intake for just five consecutive days a month but which achieves similar effects to the 5:2,” the article said.

Fast-forward four days and we’re being told the opposite by the same publication:

Which Oz to believe?

Video of the day. Last night John Laws reprised his classic 2012 interview with 7.30‘s Leigh Sales to promote his new memoir, Wild Turkey in hand. Speaking from his home in Sydney, Laws said he’d never liked Princess Diana, attributed his success to his inquisitiveness, and said he didn’t think his voice was special; he just knew how to work the microphone. 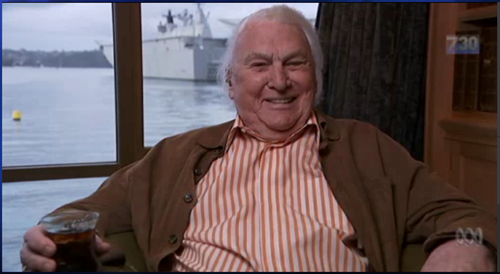 Next, in fake news. CNN has refused to air an ad from US President Donald Trump unless it cut a graphic superimposed over journalists including CNN’s Wolf Blitzer, which stamped “FAKE NEWS” on the images. CNN said the ad labelled mainstream media as “fake news”, which is false, so it could not run the ad under its advertising policy. The ad was submitted by Trump’s election campaign to mark 100 days of his presidency, and the campaign is saying the refusal is censorship.

“As someone who loathed university …”. Australian Conservatives leader and entire parliamentary delegation, Cory Bernardi has found a novel defence for the government’s new tertiary fees policy: less people should go to university. “I have long held the view that university isn’t for everyone,” he said. “Nor is university necessary for a fulfilling life.” Good thing, because only about 35%-40% of people get to go. But Cory’s personal experience may not be of huge significance, because, according to a Conversation interview, he wasn’t one of them. He did a business degree at the South Australian Institute of Technology. Nothing unusual about people exaggerating the status of their alma mater. But Bernardi does it in order to diss it. “The key to post-secondary education is to learn a financially valuable skill; be it as a doctor, a dentist, a teacher or plumber (to name but a few). University is necessary for some of those careers …”

By “some”, Bernardi means three out of four of those listed. The fourth — plumbing — was, for many years, taught at, you guessed it, the South Australian Institute of Technology, in its trades stream. Is it just faintly possible that Cory didn’t get the marks that would have let him go to university? It is. How lucky he was to have been spared. — Guy Rundle

“Sad news today of the death of Greg Hywood, the executive who built a thriving 21st century niche media business, called Fairfax, out of a large and commanding business called Fairfax. Mr Hywood was at one of his seven homes, and retrieving a jar of krugerrand gold coins from an upper shelf, which tipped over, surprising him and pouring onto his face. The coroner has recorded a verdict of death by choking.” — Guy Rundle

Anti-fake news pays. Being the leader of the so-called “opposition” to Trump and his fake news mantra is paying off big time for The New York Times as it shows slower-moving legacy media managements elsewhere (such as Fairfax Media and News Corp Australia) how it’s done. While the NYT report shows that, for a second quarter, Donald Trump has been the biggest single influence on the company’s fortunes, it was the management response to that and its exploitation of the desire for Americans to avoid “fake news” that boosted the paper and gave its best quarter for more than five years.

So successful has the NYT been, that it now has more subscribers than the Murdoch clan’s stumbling Fox News (which copped another discrimination suit overnight, bringing the total number of legal actions to at least 16). Of course, Fox News is vastly more profitable, but eyeballs are the only measure that counts these days. The NYT earned a modest net profit for quarter of US$13.2 million in the first quarter, compared with a loss of US$8.3 million the same time last year.

The NYT had another record inflow of digital subscriptions in the quarter to the point where the company’s 2.2 million digital-only subscribers is half a million ahead of the daily average audience for the Murdoch clan’s Fox News (1.7 million) in the three months to March. That helped the NYT avoid the impact of a nasty near 18% slump in print ad revenues in the quarter. — Glenn Dyer

House Rules’ pick up on Tuesday night was lost and then some — 645,000 in the metros. Seven compounded the problem by running the weak Aussie Property Flippers (Floppers, more like) from 8.40 pm, right after House Rules. Floppers could only manage 761,000 national viewers. The Weakly With Charlie Pickering did better, with over 800,000 national viewers from 8.30pm. But the four top programs in the metros again told the real story of the night — a lack of viewer interest. The top four were the various news programs for Seven and Nine from 6 to 7 pm. In breakfast a big win nationally and in the metros for Sunrise over Today – 528,000 to 427,000.

I’m neutral on the subject of John Laws but, considering the extent of his ratings’ success, he was fairly modest in the interview. Had a good laugh when he stated he wouldn’t be watching the replay of the pre-recorded interview.

Contrast Laws with someone of equal broadcasting profile in, for example, the USA – imagine Howard Stern’s puffed-up response to some of Leigh Sales’ questions.

I was puzzled by his return to the low powered,widely dispersed 2SM SuperRadio network owned by Bill Caralis. Did the interview ask whether he needed the money or adulation?.