Immigration snowed under on FOI. As one of the most secretive departments in the Commonwealth government, it is not surprising that the Department of Immigration and Border Protection (DIBP) receives the vast majority of freedom of information requests. And it clearly doesn’t have the resources to cope with it. In data released to the Parliament this week, the department has said that, at the time of an estimates hearing in late February, there were 4959 FOI requests with the department, of which, 3905 were “overdue” (there’s no such thing as overdue in FOI law, just requests that haven’t been responded to in the timeframe allowed under the act).

This appears to be a deteriorating position for DIBP. Last year, the agency reported that it was able to complete 15,710 of the 22,913 FOI requests finalised in 2015-2016 in the statutory time frame. The FOI department in Immigration has 81 full-time equivalent staff, and a budget of $6.7 million this financial year.

Overall, despite the secrecy, Immigration claims the vast majority of requests result in information being released. Over the past four years’ worth of requests, information has been released in part or in full 54,478 out of 59,817 times. Although it should be pointed out that “in part” could mean a document almost entirely full of black lines blocking out any actually salient information, with only a few mundane details left unredacted.

Not Veep but ‘Deep’ at Iannucci talk. For some reason, when we bring international people of note to Australia, we subject them to a trial by fire by appearing on Q&A as the ABC did to Veep and The Thick of It creator Armando Iannucci on Monday night. On Tuesday he told an audience in Sydney that there were some universal topics he was across, but he felt like the episode was “the clash of the deputy titans” being between Deputy PM Barnaby Joyce and Deputy Labor leader Tanya Plibersek. He didn’t have too much negative to say about the pair’s at times heated discussion, except that he was unfamiliar with Australia’s transport infrastructure. This might have had something to do with Plibersek — the local MP for Sydney — also being in the audience for the talk that night.

Latham recruiting. Is Mark Latham going to become a rival to Rupert Murdoch? Not just when it comes to dog-whistling — Latham seems to be in the media mogul business. Latham announced via Facebook that he was recruiting for staff in building his online media empire.

“To fight PC, identity politics, social engineering and cultural Marxism in our institutions, I am wanting to hire four staff, working closely and campaigning with me: a TV/video producer, administrative manager and two IT experts (Tech whiz). Young goers hungry to win the culture wars and take back our country!” 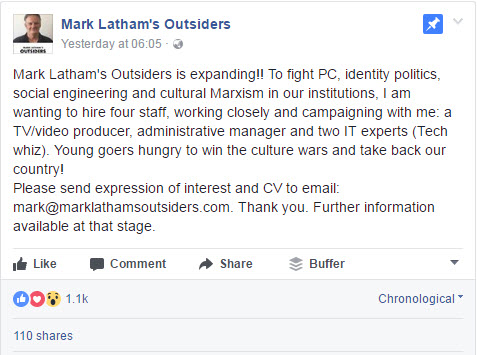 Latho only wants “young goers”, which made one of his older followers feel discriminated against. We wonder how well these roles are paid?

BFFs stiff ALP. The Sydney eastern suburbs old boys’ network mugged the ALP and Bill Shorten on Tuesday. The appearance of David Gonski next to Prime Minister Malcolm Turnbull at yesterday’s education policy announcement came as no surprise to Sydney’s eastern suburbs. In modern parlance, Gonski and Turnbull are “bros”, having gone to the elitist Sydney Grammar around the same time, and both clambered up the greasy pole of “success” to Sydney’s best address, Point Piper. Turnbull launched Gonski’s book I Gave A Gonski back in May 2015. In their own ways, they have been two of the major figures of the Sydney business community for years — Gonski more as a consigliere, Turnbull as an at times “shooting star” who, every now and then, was grounded and hauled back in by powerful mentors.

Gonski is better connected in the Sydney and Australian business communities than Turnbull ever was or will be. Gonski is very close to the Lowy family and has been on boards such as Fairfax, Coca-Cola Amatil (chair), Westfield, the ANZ (chair) and Consolidated Press. He is a networker without peer. Turnbull worked for Kerry Packer, as did Gonski, who remained close for all of Packer’s life, unlike Turnbull, who drifted away.

The links that tie Turnbull and Gonski together crisscross Sydney’s media and business circles in more ways than we can list. Against those links Bill Shorten, being from Melbourne, had no chance. The federal government’s education policy announcement was the best example yet of Sydney Inc at work. 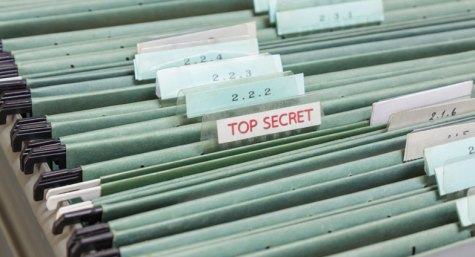 A show where a former Labor leader and a usual suspects lineup of talking heads recite Murdoch press chapter and verse, called “Outsiders” ?

This is either razor sharp irony, or deep paranoia.

I guess Latham was a young goer himself once; but an old goer is, presumably, a goner. One can only hope.