Please explain: everything Pauline Hanson has said about who owns that plane

Pauline Hanson, her adviser James Ashby, and donor Bill McNee have all made contradictory statements about who owns the party's plane. Crikey intern Sophie Wenderoth looks at tho said what and when.

Since July 2015, when it was first announced that Pauline Hanson was traveling around in a private plane, many explanations have been given as to who owns the plane and how the purchase was funded. Further questions and a varied explanations have arisen since Four Corners reported the plane had been purchased by developer Bill McNee. It’s been hard to keep up with everything that’s been said, especially in the last few days, so let’s go to the tape:

July 2015. Pauline Hanson’s adviser, and pilot, James Ashby told the ABC in an interview he had helped Hanson to find a plane. At this stage, Ashby was thought to be nothing more than Hanson’s pilot.

July 2015. In a post on Hanson’s own One Nation website titled “Hanson kicks off her ‘fed up’ tour tomorrow”, it was announced that Hanson had landed at Caloundra airport “in her new Australian made Jabiru plane”.

January 16, 2017. Hanson said the plane belonged to the party. “I’ve still got my plane, well, the party’s plane, but all the trips I’ve done in that since the election I’ve filled it up myself,” Hanson told Sky News.

Hanson also explained she generally drove herself to the airport and opted for the “cheaper” parking. “I get on the bus with all the other people from the carpark and they look at me and say, ‘why aren’t you in the Comcar, Pauline?’”

February 4 2017. Property developer Bill McNee denied any involvement in the purchase of the plane. “My God, if I am going to buy a plane, I would buy one for myself,” McNee said in a profile of Ashby in The Australian.

April 3, 2017. The episode of Four Corners delving into the backroom dealings of One Nation went to air. In it, a former One Nation staffer said Hanson’s plan had been funded by Bill McNee, who appeared to have transferred funds for the purchase of the plane to James Ashby. Four Corners presented documents showing the plane was insured in Ashby’s name.

“My company bought the plane. It’s the second plane I’ve owned. I’m very capable of buying my own planes.”

Huffington Post Australia reported Ashby had said the plane belonged to him, but did not disclose where the money came from to purchase the aircraft.

“I have done nothing wrong,” Ashby told Huffington Post Australia.

May 1, 2017. In an interview with Sky News, Hanson attempted to clarify issue. Hanson said Ashby had bought the plane from Bill McNee:

“He didn’t donate the plane to James Ashby,” Hanson said. It “came from” McNee to Ashby:

“He found out James was a pilot, he thought here’s a great opportunity to actually have a plane and to actually utilise it as well …”

“James being the pilot that gets me around,” Hanson went on to say.

According to Hanson, the AEC had been looking into the plane since January and the body “hasn’t got any issue with the plane”.

May 2, 2017. The AEC confirmed it was aware of the interview. “In line with standard practice, the AEC does not comment on the status of ongoing matters under review,” a spokesman said.

May 3, 2017. In an interview in The Australian published today, Ashby explained he had bought the plane in 2015 for recreational use and for his sign-writing business.

“It’s really simple, I purchased the aircraft … I even have the bank statements to prove that. If the electoral commission wants them, I am happy to provide them.” Ashby said.

Are we any closer to finding out who owns the plane, who paid for it and who sold it to the owner? Doesn’t feel like it. 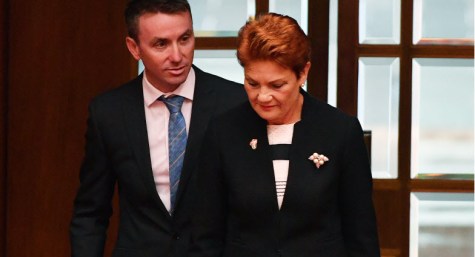 The Jabiru is RAA registered (not CASA) – it is a pity RAA haven’t updated their list of plane owners since 2012. We’d know then. I wonder what the rules are for ferrying politicians around in a recreational aircraft?

Recreational pilots flying recreational aircraft are allowed to carry a single passenger on a private basis ie provided no remuneration is exchanged (unless it’s an instructional flight). We know One Nation has paid Ashby’s company for at least some aspects of the aircraft’s operations (it’s receipted). It would be interesting to see who paid for the political paint job, ongoing maintenance, etc. It’s almost certain that the aircraft was being operated on a defacto commercial basis when it was flying Hanson around on her political campaigns.

I doubt CASA (or the press) cares enough to investigate the legal status of flights involving Senator Hanson…but I guarantee taxpayers that Ashby’s insurance company will, in the event of an accident. It’s almost certain that they would (rightly) seek to avoid liability for any injured Commonwealth employee who it could be reasonably argued was conducting public business in commercial circumstances that did not meet relevant legal/technical requirements.

There’s a reason we have a Commcar system, a RAAF VIP Flight and carefully scrutinised commercial flight/taxi arrangements for public servants, and it’s not just convenience.

If Ashby owns the plane but it has the Hanson One Nation brand plastered on it does he charge the party each time the leader is ferried from one location to another?

And does he charge for constantly displaying the branding?

No comment on who owns the plane, but the Peter Slipper saga alone is a good indication that anything involving James Ashby has more than just a whiff of NQR about it.

Sign writing business.. interesting choice for a political advisor. Would it be cynical to assume that his sole customer is PHON buying signage using publicly funded allowances and electoral payments? Can anyone confirm whether there is a cottage industry of printers, advertisers and other related “small businesses” run by political hangers-on for the purposes of skimming public cash?