Fairfax New Zealand had hoped to merge with NZME, but the regulator has blocked the deal. That will likely mean redundancies and reduced printing for Fairfax's New Zealand assets.

In Media Files today, as Fairfax announces the decimation of its news staff in Australian metro newsrooms, its division in New Zealand has been dealt a blow by the competition regulator. And the royals are in court over topless pictures of Kate.

NZ media merger blocked. New Zealand’s competition regulator has blocked media companies Fairfax New Zealand and NZME from merging, a move that is likely to result in mass sackings, paper closures or cuts to publication frequency at both companies.

The New Zealand Commerce Commission acknowledged that NZME and Fairfax “face a challenging commercial environment as they seek to transition from their traditional print products to a sustainable online model”, but disagreed with some of the scenarios the media companies faced without the merger. Chairman Mark Berry said:

“This merger would concentrate media ownership and influence to an unprecedented extent for a well-established modern liberal democracy … This level of influence over the news and political agenda by a single media organisation creates a risk of causing harm to New Zealand’s democracy and to the New Zealand public.”

It is the second controversial media deal the commission has rejected in the past few months. Earlier it blocked Sky TV — NZ’s pay TV monopoly — from buying Vodafone NZ. Those companies continue to explore either an appeal or a deal with some of its pay TV and phone rivals on content and then pushing ahead with the merger. That could become an option for Fairfax and NZME, a move that would force the commission to go to court to block the deal.

In a statement to Fairfax Media staff in Australia this morning the company’s CEO, Greg Hywood said he was disappointed with the decision and said the decision would be closely studied. It can be appealed to the NZ High Court.

He repeated an earlier threat that should the merger be rejected, Fairfax New Zealand would immediately go into “consolidation mode”, which NZ observers took to mean job cuts, paper closures and/or reduced publishing frequencies (which has already happened to a company paper in the Marlborough region):

“In light of the decision, an even greater focus on cost efficiency will be necessary. Moving to the next stage of our New Zealand publishing model will involve reshaping how we deliver our journalism to local communities. Further publishing frequency changes and consolidation of titles is an inevitability.”

Had the merger been allowed, Fairfax NZ would have been folded into NZME, which is listed on the NZX, and Fairfax Australia would have become the largest shareholder in the combined business, with a 41% stake, plus two board sports and A$53 million in cash.

Wills and Kate after 1.5 million euros in privacy suit. Photographers and magazine executives responsible for publishing topless photos of the Duchess of Cambridge in 2012 should pay 1.5 million euros in damages, a French court has heard. The Duke and Duchess of Cambridge are suing six people for breach of privacy after a French magazine and a French newspaper each published pictures of Kate holidaying on a private property in southern France. Three photographers, a magazine editor and two publishing executives have been named in the case.

Tweet all about it. Could news save Twitter? The social media site is launching a 24-hour streaming video news service, to be run with Bloomberg and other news partners. The new channel was reported by The Wall Street Journal and will launch later this year, supported by ads and screening live reports from Bloomberg reporters.

Twitter has previously had the rights to broadcast NFL games in the US (which Amazon has since won) and worked with Bloomberg to cover the presidential debates last year.

Chilling problem of protecting sources. Journalists’ ability to protect their sources is threatened by mass surveillance, national security measures and data retention around the world, according to a UNESCO report released to mark World Press Freedom Day. The report, written by Australian journalist and academic Julie Posetti, looked at the source protection frameworks in 121 countries, and found that:

“They are increasingly at risk of erosion, restriction and compromise — a development that is seen to represent a direct challenge to the established universal human rights of freedom of expression and privacy, and one that especially may constitute a threat to the sustainability of investigative journalism.”

In a comment piece for Fairfax this week, Posetti said her findings were “chilling”:

“When you catalogue a decade’s worth of cases globally, as I did with my research team, you’re confronted with an undeniable reality: even with the availability of tools like encryption, it’s becoming much harder for journalists to protect confidential sources and whistleblowers.”

Video of the day. US President Donald Trump did not take kindly to being challenged by CBS reporter John Dickerson on his wire-tapping claims about former US president Barack Obama: 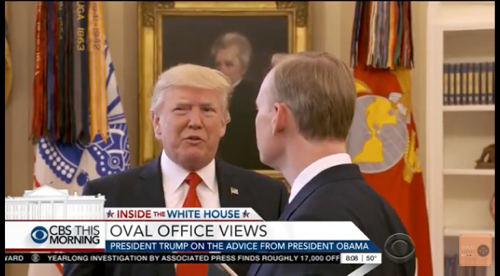 Glenn Dyer’s TV ratings. There would have been a lot of people holding their breaths at Seven’s HQ this morning. After the collapse on Monday night, how would House Rules go on Tuesday — would there be a repeat of 2016’s sudden and very damaging slide? The answer — there may be life in House Rules yet.

There was also signs of life in the 6.30pm start to The Project, which topped 400,000 for the first time in quite a while in the five metro markets. But MasterChef drifted back a bit, losing more than 210,000 viewers nationally from the 1.42 million who tuned in for its Monday night debut. Seven ran two hours of House Rules and coded them as separate episodes — nationally they averaged 1.25 million for the two hours, up 20% from Monday night.  A real relief for Seven.