Students locked out. After announcing major changes to higher education yesterday — including increased costs to students — the government also alerted student media organisations that their applications for the budget lockup next week had been rejected. Since 2014, student publications from around the country have sent their representatives to sit with the big kids and file stories on what the budget means for their readers, viewers and listeners. According to a letter posted on the website of Honi Soit, the University of Sydney student newspaper, applications from the University of Melbourne’s Farrago and Australian National University’s Woroni have all been rejected. Youth community broadcaster SYN Media has also been denied access. A spokesperson for Treasurer Scott Morrison told BuzzFeed the students had been rejected because there wasn’t room for non-professional news organisations. Crikey has also asked the Department of Treasury why this decision has been made in a year where they would have a lot to cover. Crikey will be in the budget lockup this year, with our usual mix of analysis, insight and varied selection of snacks.

Disclosure: Crikey deputy editor Sally Whyte is also president of the board at SYN Media, one of the organisations to be denied access. While she has been involved in SYN’s budget coverage in the past, she is not involved this year.

Can a Kevin Andrews staffer knock off Victoria’s upper house president? The Australian Olympic Committee’s John Coates isn’t the only long-serving incumbent at risk of losing his position in a contested election on Saturday.

Some 150 Liberal preselectors will gather at the Knox School in Melbourne’s eastern suburbs at 12.30pm on Saturday afternoon to determine who will occupy the three winnable positions on the upper house ticket contesting the 2018 Victorian election in the strongly Liberal Eastern Metropolitan region.

In a party distinctly lacking in female representation, Mary Wooldridge has been left alone at the top of the ticket, but her colleague Bruce Atkinson, the current president of the upper house, is facing three challengers for the safe No. 2 position after 25 years in Parliament. The most serious threat is from former Kevin Andrews adviser Nick Demiris, who was pivotal in the campaign in which anti-abortion advocate Tim Smith defeated then “rising star” and cabinet minister Wooldridge when she attempted to move from the abolished lower house seat of Doncaster to neighbouring Kew in 2014.

Wooldridge, the younger sister of former federal health minister Michael Wooldridge, is considered the only potential female leader in the current Liberal party room but is unable to contest the position while languishing in the upper house.

Liberals like to show respect for senior office holders, and former journalist Bruce Atkinson has done well to win the support of the Greens and the crossbench in retaining the upper house presidency under a Labor government.

The uppity Atkinson challengers, who also include Indian community leader Vasan Srinivasan and a junior staffer to vacating upper house member Richard Dalla-Riva, are expected to bomb and also suffer in the main game of the day: choosing the No. 3 on the ticket, which has attracted a field of eight candidates.

It’s an open field, but the prolific party fundraiser and Porsche-driver Gladys Liu is considered a chance after several previous failed runs at the upper house.

How not to campaign. UK Prime Minister Theresa May has been criticised for not engaging with voters in the lead-up to next month’s election — so she gave it a try. The problem was that, with cameras in tow, no one was home as May knocked on door after door. 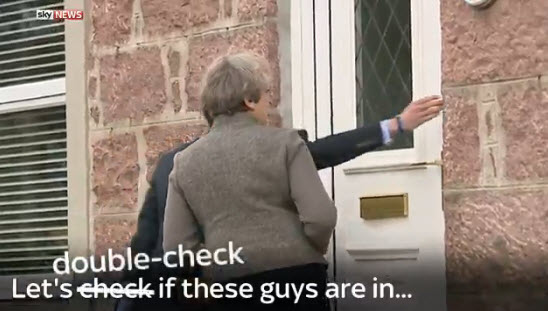 “Banks don’t just operate under a banking licence, they operate under a social licence and that is underwritten by public confidence and trust,” he told the birthday party before the candles were blown out. “Have our bankers done enough in return for this support? Have they lived up to the standards we expect, not just the laws we enact?” he wondered.

Fast forward 13 months or thereabouts and last Friday Westpac released its climate change policy, revealing inter alia that the bank would not finance new coal mine developments in coal basins. In other words, that meant Westpac had joined the three other big Australian banks in ruling out financing the controversial Adani Carmichael Mine in the Galilee basin in central western Queensland. Naturally that upset Turnbull and his lads — Resources Minister Matt Canavan called Westpac wimps and encouraged Queenslanders to think about boycotting the bank over its refusal to finance the Adani coal mine. Fairfax Media revealed yesterday that Canavan banks with Westpac himself, although a spokesman says he is in the process of moving his account. Fairfax also said Finance Minister Mathias Cormann and Prime Minister Malcolm Turnbull, who have both backed Canavan’s combative approach to Westpac, are also customers of Australia’s second largest bank.

The PM has placed a lot of his diminishing prestige on the line for the Adani mine (the developer, Adani Enterprises, is due to release its latest financial results in India in the next couple of days). Nearly a month after celebrating an uninterrupted 200th birthday (with the PM absent), Westpac has nicely sunk his pet coal mine project. Who says bankers don’t have long memories?

Not the same ship. Peter Hartcher made a blue in this morning’s Fairfax papers pontificating on Trump and Asia:

“Malcolm Turnbull will strike a pose with Trump this week on the deck of a retired warship in New York Harbour to affirm the strength of the alliance with the US. Everyone will play happy allied families in a carefully choreographed performance.

“But the reality of US alliances under Trump is not the cheerful one to be played out on the USS Missouri but Trump’s treatment of America’s South Korean ally.”

The problem is, it is the aircraft carrier Intrepid that is where Trump and Turnbull will meet and it is in the Hudson River. The USS Missouri is a battleship and it’s in Pearl Harbour in Hawaii, a very long way from NYC.