Tony Abbott has not only weighed into the Yassmin Abdel-Magied "debate", he has also said the Sex Discrimination Commissioner is "anti-men". This is not a mistake -- Abbott wants to come across as crazy and confused as possible.

Recent Western political events have been far from agreeable. They have, however, been easily approached. Five minutes with the History Channel during Weimar Week tell us all we need to know: when voters feel or fear an economic catastrophe, they’re moved to extreme choices. The hard-right authoritarian emerges to sell the falsehood of the past and the revolutionary bobs up to propose a better future: Sanders or Trump; Corbyn or Farage; Syriza or Golden Dawn; socialism or barbarism.

Here at home, we have heard a fainter echo of the cacophony in Europe. We don’t have a Le Pen and a Melenchon, but we do have a screeching Hanson and a Greens leader who dared utter the phrase “neoliberalism” as though it were a curse word. (It is.)

History has had the hopeless tendency to play out exactly as expected, and in recent months, political speech has followed neat, prescribed lines. Between you and me, I’d been feeling pretty smug about understanding the horror, which all made perfect sense. Your Bernardi and your Di Natale were both, in their distinct ways, proposing a clean break and speaking as the most likely leaders of the proximate future would.

I have to admit to getting a little lost last week, though. When the pundits and the politicians of the right started, then continued, banging on and on about an anodyne seven words posted on Facebook by a 20-something, I thought they’d thrown out the playbook; perhaps become so entranced by their own puny ethnocentricity, they could no longer help themselves.

This, I thought, is not the way you’re supposed to do public racism — there’s got to be a level of deniability, per Farage. I mean, even Trump allowed that not all Mexicans were rapists, but our locals had laid into the likeable figure of Yassmin Abdel-Magied in a way that made it seem as though they were swinishly enjoying themselves.

I imagine that they are swinishly enjoying themselves; frankly, there’s a pornographic edge to this latest feed at the trough. It is possible, I suppose, that they have consciously seized this moment for political ends. As Scott Morrison prepares a budget based on the market-friendly principles now so vehemently discredited worldwide, this young figure is a handy decoy. We’re making it harder for your kids to go to school, and the “scalpel” we’re taking to their future of housing affordability is really more of a plastic spork.

Still, at some point, this must have begun to look like hypocritical folly to most. You don’t need a fine understanding of free speech to know that the young commentator had mildly exercised hers, nor do you have need of Noam Chomsky to grasp the concept of political distraction. These guys had begun to look to most, I believe, unconcerned with everyday matters and as precious and out-of-touch as the “snowflakes” they decry.

Honestly, I thought that the right had lost the plot. By the time Dutton, Fifield et al had all weighed in with their thin arguments, the thing had begun to seem brutally tribal. Waging a false culture war in the moments before our annual budget battle with government looked onanistic or cynical. Either way, the right looked all at sea.

And then Captain Abbott re-emerged to help me make sense of it all. While it’s certainly true that the former PM has a marvelous record of misreading the public mood — Sir Prince Philip — it’s also true that his political desperation has turned him again into an apt interpreter of a particular voter: the perpetually embarrassed and confused duffer.

Yesterday in an intolerance mashup, Abbott not only criticised Abdel-Magied, but went a little further and labelled a moderate call for increased female labour participation by Kate Jenkins, Australia’s Sex Discrimination Commissioner, as “anti-men”.

Jenkins had not proposed quotas by private firms contracted to government but said: “Commonwealth government should become a model industry in improving the participation of women in the workforce.” In other words, a person appointed to address the matter of discrimination had said that ending discrimination might be a nice idea. This is far less a case of Jenkins being “anti-men” than it is of her doing her job. If the suggestion that more women should work is misandrist, then your average Australian woman is a bona fide castrator.

This, I don’t think, is a misstep by Abbott; it’s not another moment where he pops an onion into his mouth. It is, I think, a cunning bet, particularly in the post Abdel-Magied week, to come across as crazy and confused as possible. This strategy of offering unfiltered rot in public is less about what he says — I venture that few would say that a call for more equal participation by women in roles paid for by government is “anti-men” — but the fact that he says it.

Of course, there can be little doubt that Abbott has some genuinely odd ideas about the ladies. But the ideas themselves are not what is important here, as I believe this political volcano knows well. It’s not the substance of his curious lava that will endear him to a certain confused Australia, but the very act of eruption.

This is what the hard-right, and one of its best-loved figures, has now: temper tantrums. Moments of flare-up whose matter is secondary to the fire itself. Forget coherent policy, or even much in the way of neoliberal justification, as we head toward 2019 in Australia. Just look out for the explosions.

The tampon tax is a convenient distraction. Period. 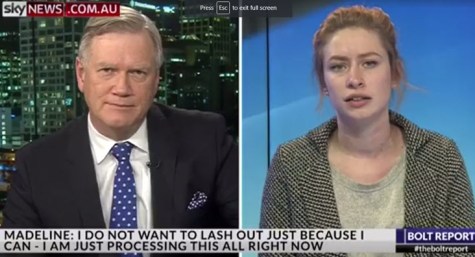 It’s odd our political leaders reckon we can afford to have public discourse like this. Is it a function of our prosperity? Lowest common denominator – like listening to Abba

I liked ABBA. My 6 yo daughter loves Dancing Queen. They also had gender equality. However ABBAT is way uncool albeit good for a guilty laugh in his ludicrous attempts to get back in the lemon light. Perhaps the Libs could play ‘Money, money, money, it’s a rich mans world’ for its new team song. A bit of honesty would be refreshing.

Dear Helen Razer,
PLEASE….Tony Abbott needs to be pursued in regard to him proving himself, to the people of Australia, that he duly complied with S44 of the Australian Constitution, and revoked his UK citizenship PRIOR to him being elected as the Member for Warringah in 1994.
Julia Gillard was asked to prove her compliance…and….she did.
Request has been made of Tony Abbott to prove his compliance…BUT…he has not yet:
http://newpolitics.com.au/what-is-tony-abbott-hiding
https://www.thechronicle.com.au/news/pms-office-denies-claims-tony-abbott-british-citiz/2374139/
https://independentaustralia.net/politics/politics-display/tiad-of-fudging-on-the-citizenship-issue,6882

It should be a simple thing for Abbott to prove his compliance.
There have been High Court cases where politicians that were proved not to have complied with S44 were `unseated´ and then, they had to repay all their remuneration.

None of us are above our Constitution. Why is Abbott not being pursued to prove his compliance??

Thank you Helen!
I am still grappling with the notion that Tony Abbott has a method to his madness. Thus far we have only ever witnessed madness unmotivated by method.
Lately even his outbursts have a quality of “look at me, look at me” to them. When his competitors for idiocy include the likes of Barnaby Joyce and Peter Dutton, Tones does have to up the ante a little bit.

Another thing, and one not on point.

Does anybody else have the suspicion that the little cozy love-in between Ray Hadley and Tony Abbott may have been organised before SOMO got the arse? I feel in my bones that Tones may have been maneuvering for the gig for months and Hadley sensing a ratings coup was looking for an excuse to ditch Scotty. I mean, the divorce and wedding announcements happened almost simultaneously? Come on?

I think the writing was on the wall for ScuMo the moment he refused Rat Hately’s request to swear on a Hillsong Bible (notable for the heavily bejeweled chalice stuffed with $100 bills on the cover) that he’d been loyal to Tones when Turdball got the nod for PM.
Scooter provided good copy when he was ruining/running the Immigration portfolio, but as the Chief Budget Blower and maybe a mate of Mal he can’t quite find the right pitch for the dog whistle.
Tones fits the 2GB profile perfectly and wouldn’t…simply couldn’t go off script .