Today in Media Files, Daily Mail Australia confuses its Wog Boys in story about Nick Giannopoulos, and, in the US, Fox News faces yet another lawsuit.

Today in Media Files, the Daily Mail Australia can’t spot the difference between Nick Giannopoulos and Vince Colosimo, and, in the US, yet another lawsuit for Fox News.

Daily Mail‘s Wog Boy mix-up. Writing up an interview from Nine’s Today yesterday, Daily Mail Australia committed a grave sin by not recognising the co-creator of classic Aussie film The Wog Boy, Nick Giannopoulos. Throughout an article about jokes Giannopolous made about host Karl Stefanovic’s new relationship, the Mail referred to Giannopoulos as another Australian actor of southern European heritage, Vince Colosimo. 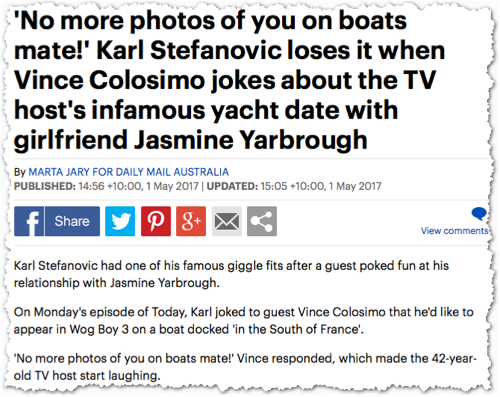 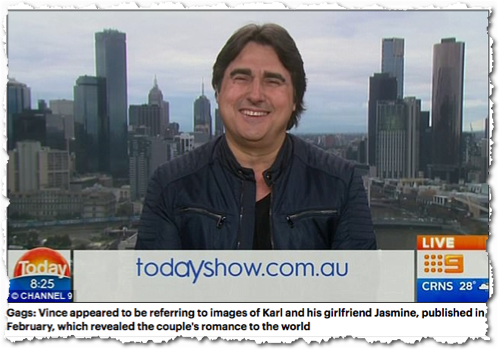 Colosimo appeared with Giannopoulos in The Wog Boy. The error had been corrected this morning.

Tell us if you’ve seen this one before. They don’t watch TV at Fairfax Media these days, otherwise how could they publish this story this morning under the headline: “Basketball great Lauren Jackson’s post-career ‘nightmare'”. If the reporter had been watching TV on successive Tuesday nights — the SBS program, Insight — in April, they would not have written such a breathless report on last night’s Four Corners.

Over two one-hour episodes in April, Insight covered the post-career problems experienced by elite athletes, featuring a bevy of elite Australian sportspeople. They showed brutal honesty about their lives as athletes — and their feelings of loss and inability to cope after retiring.

SBS was there well before the ABC. Both were good ideas, but SBS’ was better because there was more from the sports people involved, broken only by some editing and host Jenny Brockie’s questions and comments. In both stories, the honesty of the athletes was stunning and a necessary antidote to all the cheer-squadding you get in sports coverage generally and in match coverage. — Glenn Dyer

The revolving door. Brisbane Times editor-in-chief Simon Holt is moving over to the dark side. Holt has announced he will finish up on May 12 to start a new role as communications/media manager with Ipswich City Council. We understand he will not be replaced, with Danielle Cronin continuing as editor.

The Oz‘s tireless AOC campaign. No one could accuse The Australian of not going the extra yard in their tireless campaign to unseat John Coates from the presidency of the Australian Olympic Committee. Today they ran a yarn — over eight columns, with picture, right across the top of page 6 — quoting Lachlan Milne, a former Olympic canoeist nobody can remember. Predictably, he calls for a “new way” at the AOC. But the reporter, Chip Le Grand, had to go a very long way to extract those quotes. Milne spoke to The Australian “from the Comoro Islands in Africa”.

Meanwhile, in a single-column piece way back on page 32 (with no picture), Nicole Jeffrey gets a grudging run for her story quoting “a who’s who of Olympic champions and other leading figures in Australian Olympic sport” who are supporting Coates.

And elsewhere in the Oz today an editorial gets stuck into the ABC for not “taking a more balanced editorial stance”. They’ve never had much of an ear for irony at Holt Street. — David Salter

Chorus joins call for ABC content quotas. Former ABC head of TV Kim Dalton has predictably won a round of applause from some industry groups for his essay calling for quotas on the ABC’s locally produced and children’s content. In The Sydney Morning Herald today, head of the Australian Children’s Television Foundation Jenny Buckland writes that the ABC needs transparent reporting obligations. Screen Producers Australia said in a statement the release was timely, given commercial broadcasters are currently lobbying to remove their obligations.

Another lawsuit adds to Fox woes. The bodies (and law suits) keep on piling up at the feet of the Murdoch men at Fox News Channel with Bill Shine, a co-president and close mate of Roger Ailes and Bill O’Reilly falling on his whatever and resigning overnight Monday. It’s just a week since Rupert Murdoch took him to a very public lunch at a seafood eatery in New York to signal that he still supported him. Three days after that lunch, reports emerged in New York Magazine that Shine was for the high jump as James and Lachlan Murdoch wanted a new leader for the troubled channel.

At the same time yet another law suit has been thrown against Fox, this one from a woman staffer alleging gender and disability discrimination. It takes the number of legal actions against Fox from various current and former staff in sexual harassment and racial discrimination suits to at least 15.

By last weekend, Shine was in a precarious position with reports suggesting the Murdochs were looking for a woman to replace him. And on Monday in NYC, he was gone, his departure announced in a memo by an obvious crocodile tear shedding patriarch of the clan. Shine had been with Fox for 20 years, an original. And unsurprisingly a female Fox executive was named to fill part of his role.

“Sadly, Bill Shine resigned today,” Murdoch said in a memo to staff. “I know Bill was respected and liked by everybody at Fox News. We will all miss him.” Boohoo.

Shine was a protege of Roger Ailes, who was pushed out of Fox last July with US$40 million of walking-away money after Gretchen Carlson filed a sexual harassment lawsuit against him and other women came forward with similar claims. She won a US$20 million payment. Shine has been named in a number of related legal actions and accusations since being named by Rupert Murdoch to the co-president’s role with Jack Abernethy. Among the allegations, Shine has been accused of allowing a culture of sexual harassment and bullying to exist at Fox News Channel under Ailes. — Glenn Dyer

Glenn Dyer’s TV Ratings Seven will be grimacing this morning after the the audience for second night of House Rules collapsed, while Ten would have been overcome with relief this morning after a good start for MasterChef. Ultimately, Nine won the night thanks to The Voice.

And to make the night even more miserable for Seven — Seven Year Switch is now deep in turkey territory (the content alone put it there, but the audience turning their remotes against it in the past couple of weeks has been a joy to watch). Switch could only manage 745,000 viewers nationally.  The top shows in the regions were Seven News with 712,000, followed by Home and Away with 520,000, then Seven News/Today Tonight with 500,000, The Voice was 4th with 474,000 and the 5.30pm part of The Chase Australia was 5th with 469,000.

In breakfast, Today just topped Sunrise  in the metros, but nationally it was Sunrise with 549,000 who easily beat Today with 451,000. — Read the rest on the Crikey website