When will Fairfax swing the axe? The consultation period between Fairfax management and staff over proposed cuts worth $30 million ended last week. Now it’s the waiting game until the company announces just how many jobs will go from The Age, Sydney Morning Herald, Brisbane Times and WA Today mastheads. Will management time the announcement to coincide with either tomorrow’s Victorian budget announcement or next Tuesday’s federal budget in order to make it harder for staff to go on strike? Fairfax staff have already threatened industrial action over the cuts, which come after 120 staff were made redundant last year. Know more? Drop us a line here. You can remain anonymous if you wish.

Westpac’s Adani decision just good business. Unsurprisingly, the peak body of Australia’s mining industry was apoplectic at Westpac’s announcement last week that it would not lend to Adani’s white elephant Carmichael coal mine, nor to any future coal mines that did not meet a high coal energy requirement. “A textbook case of cynical virtue signalling,” bleated Minerals Council head Brendan Pearson (we’re disappointed he didn’t dip into other parts of the right-wing dictionary and label Westpac as “snowflakes” or “precious petals”, although the perpetually enraged Queensland anti-abortion senator Matt Canavan lashed Westpac for being “wimps”). Unsurprisingly, mining columnist Matthew Stevens at the Financial Review hopped into Westpac today.

“Perhaps it is the product of a life spent constantly living under the shadow of the Commonwealth Bank, but whatever the reason, Westpac suffers from an almost obsequious need to please,” wrote Stevens — one of many pieces of snark directed at the bank.

The editors of the Financial Review might want to be careful. What happened the last time there was a high-profile decision not to invest in fossil fuel projects? That would be when ANU divested in Santos and several other companies in 2014. That elicited not merely a furious reaction from the Abbott government but an equally aggro campaign from the Fin Review, with reporter Ben Potter penning article after article savaging the university. And what happened next? Santos’ share price fell off a cliff in the most dramatic vindication possible for ANU. Speaking of which, how’s that Santos share price faring now? Today it was $3.47, which is almost exactly a quarter of its price when Tony Abbott labelled ANU’s decision “stupid”.

Stand by for RBA frenzy. Tomorrow is the first Tuesday of the month, which means it’s interest rates day for the Reserve Bank. But interest rates will take a backseat in tomorrow’s statement from Reserve Bank governor Phil Lowe after the central bank’s May board meeting. It will be what Lowe says about house prices (April’s figures are out today) and especially investor lending and interest-only loans that will hold the greater interest. Comments in these post-meeting statements from the governor and detailed minutes of the past two board meetings have revealed the sudden rise in regulatory concern about the house price boom in Sydney and Melbourne. And this time won’t be any different, especially with Lowe due to make a major speech on house prices in Brisbane on Thursday. Entitled “Household Debt, Housing Prices and Resilience”, the speech will be at a lunch of the Economic Society of Queensland. On Friday the RBA releases its second Monetary Policy Statement of the year, which will not only contain new forecasts for economic growth and inflation, but also expand on what will be in tomorrow’s statement from the governor (which will also make reference to the updated forecasts). Lowe’s speech in Brisbane is unusually close to the federal budget on May 9 and will focus on a one of the more contentious of current policy debates — house prices, which is also unusual. In 2015 and 2016, former governor Glenn Stevens made speeches a bit further away from the day of the budget being handed down, and on less contentious subjects. The last time Lowe spoke on house prices his comments were seized on by MPs across the spectrum, so the frenzy could be even worse this time around.

It’s the constitution, it’s the vibe. Labor was quick off the mark to lodge a formal complaint against Pauline Hanson’s One Nation after The Saturday Paper broke the story over the weekend about recent changes to its governance structure. The story is by Tom Ravlic, who has broken multiple stories on issues with One Nation’s governance structures in Crikey. Labor Senator Murray Watt went straight to the Australian Electoral Commission with a detailed complaint before we made it to Sunday.

As David Marr told Insiders on Sunday, with Hanson, it’s all about her power and access to public funding. The only problem with that is the need to consult with members and have democratic processes.

The same questions could be asked of Family First and Cory Bernardi’s Australian Conservatives. Were members given a vote on that merger? Did the decision to merge comply with both parties’ constitutional requirements?

Don’t say we didn’t tell you. Let’s cast our minds back to Thursday last week, where we noted that Department of Foreign Affairs and Trade bureaucrats had told Senate estimates on notice that Yassmin Abdel-Magied’s trip to the Middle East last year had cost a paltry sum, and that she hadn’t spoken about female genital mutilation or the death penalty on the speaking tour. “While there doesn’t seem to be a scandal here, that hasn’t stopped The Australian before,” we wrote. Now, we present to you, page 5 of the Oz on Saturday: 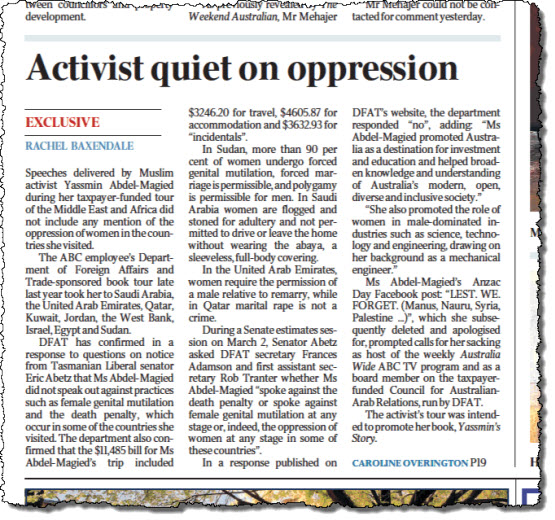 And when is the Oz going to speak out about our concentration camps and indigenous atrocities that our right wing governments are so keen on.

If these fossil fool cheerleaders think so much of this Adani project let them club together to supplement Adani – mortgage their homes and whatever it takes.

Good idea, rather than putting our money where their mouths are.