Is 24-hour public transport really such a good idea?

Victorian Premier Dan Andrews' "Night Network" is the worst kind of initiative because it was an election promise made from opposition with scant analysis or regard for what’s good policy.

The Victorian government announced on the weekend that Night Network — the current trial of all-night public transport on weekends — will be made permanent from the first of July:

“Minister for Public Transport Jacinta Allan joined hospitality and healthcare workers today to announce $193.2 million over the next four years to make Night Network permanent … More than two million trips have been taken on overnight trains, trams, buses and regional coaches since the Labor Government introduced Night Network at the start of last year.”

It might sound curmudgeonly, but I think this decision requires closer examination. It’s disappointing the government would sign-off expenditure of this magnitude (it’s $48.2 million p.a.) without releasing a benefit-cost analysis to support its decision. Key questions remain unanswered, e.g. do the benefits exceed the costs? Who wins and who loses from this decision?

Two million trips sounds a lot, but it’s over the period since the trial began on January 1, 2016. It’s less compelling when it’s put in context; over the course of a year, Melburnians make more than 4 billion trips by all modes according to the government’s VISTA travel survey! They make 1.1 million trips by public transport on an average weekday and a further 8.9 million by car. 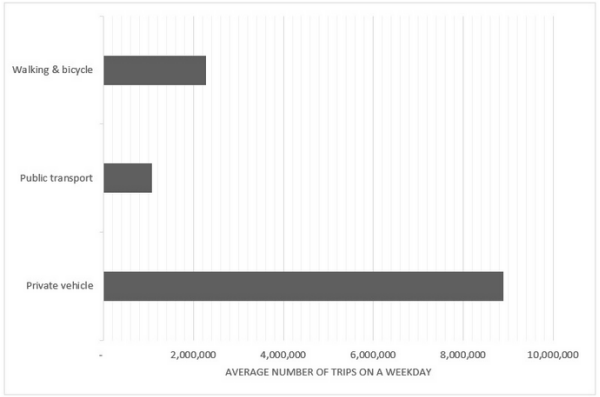 Public Transport Victoria claims Night Network averages 35,000 patrons each weekend. I’m suspicious of this number because I can find nothing on the PTV site showing if patronage from the former Nightrider bus services has been deducted. Nor can I tell if the Night Network count starts after what used to be the latest service (circa 1.00am on most lines) and before what used to be the earliest service.

But assuming 35,000 is right, it means each Night Network trip costs taxpayers $26, based on the budgeted expenditure of $48.2 million per annum over the next four years. However that’s a lot less than the $83.6 million cost of the initial 12-month trial. If the government is being “clever” with its accounting again (e.g. not including higher security staffing costs, say) and the latter figure is the pertinent one, the average cost of the Night Network is $46 per trip. Ticket revenue needs to be subtracted in both cases, although it’s not a big number; it’s complicated by concessions but is likely to be significantly less than the $4.10 Myki maximum.

The required subsidy for the Night Network isn’t trifling. Even if the stated cost is taken at face value, $48.2 million p.a. would buy a lot of other worthy public services. For example, it would pay the annual salaries, excluding on-costs, of more than 700 bus drivers or over 600 teachers. Or consider that it would easily cover the cost of reducing the one-way SkyBus ticket from $19 to the standard Myki fare for all users, including airport workers.

It’s unlikely Night Network offers any environmental benefit. Near-empty trains, trams and buses must be brought into service or returned when they’ve completed an outbound journey. And later services have lower load factors. On the other hand, taxis, hire services like Uber, and private cars have relatively high average load factors late at night so their emissions per person are more competitive. This shouldn’t come as a surprise; according to the former Commissioner for Sustainability, Victoria’s trams and trains already “have GHG full fuel cycle intensity levels on an average per person-kilometre basis that are comparable to motor vehicles”.

The Minister for Public Transport, Jacinta Allan, doesn’t emphasise the cost or the environmental impact. Instead, she highlights the benefit to night workers, citing PTV research showing 20% of Night Network passengers are shift workers, mostly in hospitality. That translates to an average of 3500 workers per night on Friday and Saturday. I don’t doubt they’re better off, but $48.2 million per year is an expensive solution. And it prompts the obvious question: how were they getting home from work before the Night Network trial started on January 1, 2016?

But that still means 80% of beneficiaries are leisure travellers. They’re better off too, but this decision has been made at a time when the costs of late-night transport — in terms of dollars and level of service — are lower than they’ve ever been because of new services like Uber.

The Minister makes a big pitch to city pride:

“The best cities in the world don’t stop when the sun goes down — and neither does Melbourne. Night Network is part of what keeps Melbourne the world’s most liveable city, and it’s here to stay.”

There’s plenty of hyperbole here. Of the 1034 cities worldwide with a population greater than 500,000, only 10 offer 24-hour public transport on weekends. They’re all cities — like London and New York — that are much more transit-oriented than Melbourne. Even the likes of Paris, Amsterdam, Hong Kong and Singapore cease train services by 1.00am. There are other cities around the world that offer “Night Owl” bus services, but so did Melbourne prior to the Night Network trial.

This is the worst kind of initiative because it was an election promise made from opposition with scant analysis or regard for what’s good policy; it was driven by its political appeal. Now the promised trial — which inevitably raised expectations — has inevitably been made permanent. And inevitably, there’s no public benefit-cost analysis because it would look like the Napthine government’s assessment of the East West Link, i.e. awful.

Of course it’s nice to have it, but on the face of it, Night Network looks like an enormous subsidy of a very small number of users, most of whom now have more options than ever. The key issue is whether or not there are more socially useful ways the government could spend $48.2 million every year, e.g. would bringing SkyBus fares into line with the standard Myki tariff be a better outcome? More teachers? More nurses? More trains? This really isn’t much different in principle — especially the appeal to city pride — to the mammoth annual subsidy for the F1 Grand Prix.

2009 budget blessings for the ABC

Wanted — one agenda for Federal Government.

Economists: A three point plan for the new government

The weekend city travellers, revellers and weekend hospitality workers seems quite content with it though, and while it will not have a good outcome from a business cost analysis, neither does fire and ambulance services.

Also I don’t think the owners of Skybus are too keen on having the fares slashed to bring it in line with Myki fares, unless the government is prepared to heavily subsidise it.

Using a 5 year old Quora thread to state “only 10 [cities] offer 24-hour public transport on weekends” is a bit dubious. For example, this ignores the existence of Brisbane, which have been doing their NightLink train and bus thing for years. I even had the pleasure of using it myself some months back (and avoiding some nasty Taxi queues in the process)!
I gently suggest that if 24-hour weekend public transport is feasible in Brisbane, it’s also feasible in Melbourne.

I don’t live in Melbourne, but think this is a good initiative from the point of view of those people who cannot afford taxis and uber alternatives…and don’t own a car.
There is also the safety factor to consider…even if it saves one life being lost from random violence…one rape of a young woman not happening…it is well worth the money.
Some things transcend ‘cost-benefit’ analyses…life is NOT all about economics!!

Given that the night shift workers would by definition be some of the poorest paid they would be most likely to benefit from such a scheme.
We work to live, not live to work and if the public had a decent, what’s the word, public transport system perhaps they’d be less inclined to own cars.

Agreed and you can’t measure take up immediately. People have to know it’s there to use it and that it’s their to stay to not replace their cars when the time comes.

You really need some trains designed for night services. One or two carriages only in length so they are cheaper to run and keep the passengers together for security. They need to be designed so they can be attached to other trains and so not wasted during the peaks.

Melbourne Metro trains are often two 3-carriage trains coupled together in a motor-trailer-motor running configuration. A decade ago, a single 3-carriage trains would run on the weekends, however, studies have shown that it is not that much cheaper to run shorter trains, and you actually have to factor in the time and resources needed to de-couple and re-couple these train sets.