For all the sound and fury around the demonisation of Yassmin Abdel-Magied for her (rather anodyne) Anzac Day comment, we haven’t learnt a great deal. We already knew that the 18C crowd at News Corp and on the political right were completely inconsistent in their support for free speech — the rapidity with which they switched from demanding free speech to chanting “burn the witch” for Abdel-Magied’s thoughtcrime illustrates that they only want freedom of speech for themselves. And we already knew that they are racist — Bill Leak’s cartoons literally illustrate how they primarily want freedom of speech so they can vilify non-white people and LGBTI Australians. That Abdel-Magied should be vilified for making a comment about Anzac Day barely a fraction as controversial as any number of white males have said (for example, myself and my colleague Guy Rundle, who has roughed up The One Day Of The Year almost annually) illustrates that her real crime was Opining While Brown.

It did reflect something slightly less obvious — that the right-wing shtick of deliberately outraging ideological opponents by uttering something offensive — a favoured tactic of any number of News Corp reactionaries and Peter Dutton — work every bit as well the other way. Abdel-Magied, a glib but clever self-promoter, used Anzac Day to trigger (pun intended) right-wing snowflakes with practised ease, and the precious petals on the right reacted to News Corp’s outrage-baiting with perfect predictability. She gets the attention, News Corp gets the clicks, everyone’s a winner.

Meanwhile, Labor MP Anne Aly — who just happens to be a non-white Muslim woman too, but surely that’s just a coincidence? — was at the centre of a storm so absurd that not even News Corp would make it up. Aly participated in an Anzac Day ceremony at Ballajura in her electorate in Perth, as you’d expect from any major party MP, and laid a wreath there. But fascists on Facebook decided that, because she had not been at another ceremony in her electorate, she too was guilty of thoughtcrime and “disloyalty”.

[What Ayaan Hirsi Ali gets right about freedom of speech]

So it doesn’t actually matter what a Muslim woman says or does, she’s guilty of some profoundly unAustrayan act no matter what.

Of course, the rich irony of all this is that a substantial part of the commentariat, and plenty of lunatics on social media, saw fit to commemorate Australia’s unprovoked — and disastrously unsuccessful — invasion of a Muslim country in 1915 with unprovoked attacks on Muslim women.

It’s more than irony, in fact. One of the more bizarre complaints that crop up around Anzac Day is when someone is alleged to have “politicised” it (see, for example, this silliness in The Australian about an Aboriginal “activist” “hijacking” the Adelaide dawn service). One cannot “politicise” Anzac Day as it is innately, fundamentally political already. Its purpose is to impose a political narrative in which Australia’s participation in the long wars of imperialism of the 20th century — from the Boer War through to the most recent, and continuing, Iraq war — is justified through solemn remembrance of individual service and sacrifice. The specific date of Anzac Day is appropriate: April 25 marks our participation in an attack on Turkey (then the failing Ottoman empire) at the behest of our own imperial masters and thus accurately signifies our military history, which has mostly been as a junior partner in imperialist ventures either for the British or the Americans. Our readiness to embrace the military obligations of our vassal state status continues even now, with the current government still busily “stabilising” and “training” in the Middle East, just like John Howard was doing a decade ago.

It’s also apt that Anzac Day has been so closely bound up with national identity myths (“the Anzac spirit”, our military exceptionality, betrayal by the British officer class etc), given that in World War I we were a colonial settler society still engaged in a war of dispossession and occupation against Australia’s original inhabitants when we joined the forces of other settler societies in another imperialist venture. It’s almost as if, unable to draw meaning and identity from the land we’d stolen — we were still massacring indigenous Australians as part of the Frontier Wars as late as 1928 — we’d tried to draw self-definition from a blood sacrifice to our imperial overlord.

The hounding of Abdel-Magied and the invented fury at Aly are not some absurd excess of Anzac Day, nor a misappropriation of it by the right, or by a dying media company desperate for clicks. They are a core part of the Anzac tradition, of imposing a legitimising narrative of white Australia and imperialism, often at the expense of non-white people unlucky enough to be in our gunsights, metaphorical and literal. 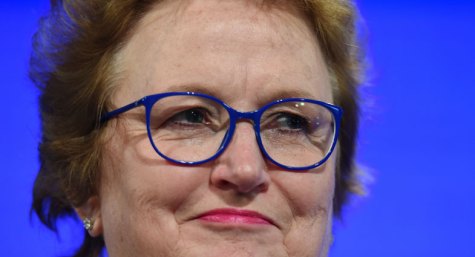 Vanstone on Abdel-Magied: a case study of an illiberal liberal 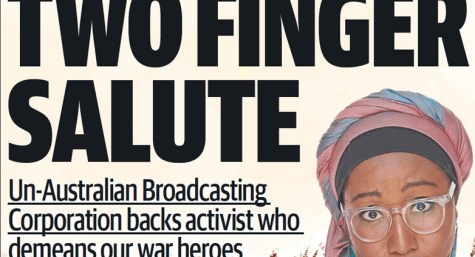 Attack on Yassmin Abdel-Magied is the act of myth-loving, right-wing cowards 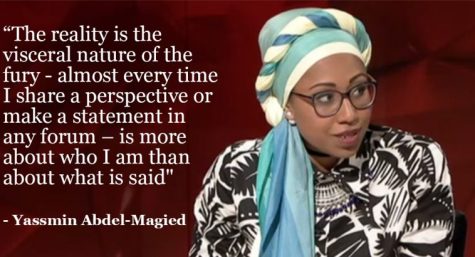 On point at every turn. So sick of the snowflake rightwing.
Howard’s Blue Shirts can’t abide any questions about our history and our actions.

Beautifully put. I’m going to have to make this a topic in a local current affairs discussion group I attend, just to see the barking mad self implode.

My thoughts exactly. And I can’t believe that I hadn’t heard them expressed elsewhere in the media.