One of the effects of reporting like this is that drug users are less likely to seek help, says Dr Marianne Jauncey.

Splashed across today’s Daily Telegraph, and with a double-page inside spread, are some confronting pictures of a drug user shooting up in the Sydney CBD.

Under a front-page headline of “A shot in the heart”, and inside headlines of “City’s heart is a junkie yard”, the story uses images of drug users, whose faces have been obscured, either administering or dealing drugs. A series of photographs of a man injecting on the street were published on the front page and inside the paper. 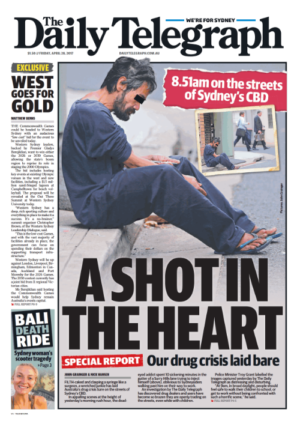 The story describes drug use and exchanges observed by Tele reporters, and quotes New South Wales Police Minister Troy Grant and opposition police spokesman Guy Zangari on their reactions to the shocking images. 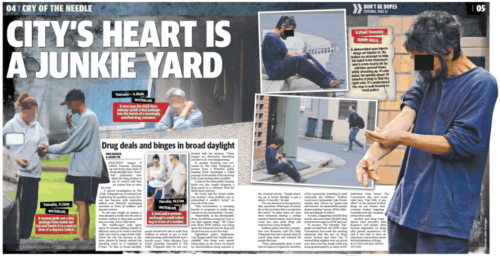 Dr Marianne Jauncey, medical director at the Uniting Church’s Medically Supervised Injecting Centre in Sydney’s Kings Cross, said the article described legitimate issues and correctly said arrests and criminality were not addressing problem drug use in Sydney. But she said clients had been distressed at the tabloid splash this morning, and the overall effect could be that it discourages users from seeking help.

She said the effect of reporting like this was that drug users were less likely to seek help.

“We all want them to get better and have the courage to seek help. Stories like this have the exact opposite effect that everybody would want. When you splash their face all over the front page of the paper, people become vulnerable, upset and tend to turn inwards. Why on earth would you say yes, I’m like that person? It absolutely further stigmatises people who are users and (makes them) less likely to seek help.”

Jauncey said the safe injecting room had broad support across the community, and harm-reduction policies were generally seen as the best approach to reducing the number of problem drug users in Australia.

“What I would hope is that with an article like that, people would read that and it starts a conversation,” she said.

The Australian Press Council had not yet received any complaints about the story this morning, but a spokesman said it was currently reviewing its guidance on reporting on drug use, which was last updated in 2001.

Under the Press Council guidelines, publications should “avoid causing or contributing materially to substantial offence, distress or prejudice, or a substantial risk to health or safety, unless doing so is sufficiently in the public interest”.

In response to questions about the coverage emailed to Tele editor Chris Dore, he said: “Are you actually serious? Let’s ignore all difficult and confronting topics. Thinking about it you’re right, the Tele will tomorrow publish unicorns on the front instead.”

“Through your utter incompetence and blind hatred of everything The Daily Telegraph does, you are doing a massive disservice to journalism,” he said.

Dore also pointed Crikey to the iconic Sydney Morning Herald image of a teenager shooting up in Redfern, which is credited with leading to policy reform that included the introduction of the safe injecting room.

Note: This story has been updated to include the Daily Telegraph‘s response.

Just the worst. These are human beings.