Ruddock costs taxpayers more than $200,000 in a year, plus parliamentary pension

Former father of the house Philip Ruddock has cost taxpayers over $200,000 in travel and accommodation costs since leaving Parliament last year.

When Ruddock announced his intention to retire in February last year, the Turnbull government appointed him as special envoy on human rights, to represent Australia’s human rights interests around the world — with a particular focus on the death penalty.

Figures released this week by the Department of Foreign Affairs and Trade reveal that Ruddock has racked up more than $200,000 in bills in his first year in the job travelling around the globe. Ruddock has attended a world congress against the death penalty in Oslo, and has traveled to Geneva, east Africa, the Middle East and Central America in order to promote Australia’s Human Rights Council candidacy, with flights up to $28,000 for each trip. 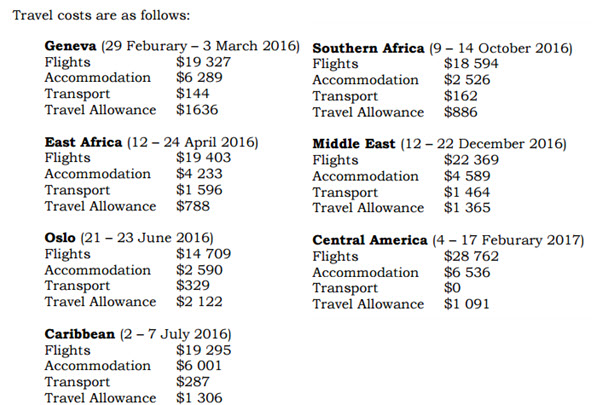 On top of his estimated $200,000 per year parliamentary pension, Ruddock had also been double dipping in getting paid for his work as Australia’s special envoy on human rights. The former immigration minister was paid more than $23,000 for his work until February 13, 2017.

But all good things come to an end — DFAT referred Ruddock’s position to the Remuneration Tribunal, and the tribunal ruled in February this year that Ruddock’s pension should be reduced while he is also taking money for the envoy role.

His pension has now been reduced. Ruddock was relying on advice from Finance that he could take both payments, but DFAT realised an inconsistency between Ruddock’s position and that of former parliamentarian and former ambassador for women and girls Natasha Stott Despoja — who accepted a reduced parliamentary pension while in her envoy role.

DFAT said that the tribunal’s ruling would not be retrospective, so Ruddock would not be required to pay back the $23,000 extra he had earned in his first year as special envoy.

As part of his role, Ruddock reports back to Foreign Minister Julie Bishop. DFAT said Ruddock had only had one formal meeting with Bishop since taking on the role, but had been keeping her updated about his activities.

Leaving aside the obviously First Class flights Ruddock enjoys, his accommodation is rarely under $1000/night. Nice work, if you can get it.

Here we go again! The perks that pollies receive after they leave office is, scandalous, by average worker conditions. This added to the immorality of double dipping, they really do deserve the pigs in the trough, when are we going to stand up to them and insist they are more accountable and honest.

I’m all for keeping him out of the country however 50 nights absent have cost us $4K per day. At that price it’s purely indulgence on our part.

Human Rights Envoy? This scandalous old serpent? What the bloody hell does he know about human rights except for how to undermine them. Worse, he was once a human rights advocate, but sold his soul to the devil and John Howard. I recommend reading a song called ” Joshua Gone Barbados”.
“Joshua gone Barbados, him livin’ in a big hotel, people on St Vincent got many sad tales to tell”. Or should it be “People in detention”. Fork tongued flim-flammer.