Poll Bludger: who is Australia’s most popular crossbencher?

As confidence in the major parties diminishes with every passing year, minor parties are becoming increasingly justified in their long-held complaints that the media fails to offer them appropriate air time.

However, there are a good many aspects of the media spotlight that parliamentary crossbenchers should be happy to be spared — chief among which is the gruelling weekly schedule of opinion polling and the intensive scrutiny that major party leaders are subjected to as a result.

On the rare occasions when pollsters have ventured to gauge opinion of the minor players — the most recent example being Essential Research’s poll for The Guardian Australia last week, which featured approval ratings for the most prominent Senate crossbenchers — the results haven’t always been too flattering.

This is illustrated by the tables below, showing averaged results for minor party and independent members from scattered polls over recent years in terms of net approval (i.e. approval minus disapproval) and “recognition”, encompassing the proportion of respondents who chose options other than “not sure” or “don’t know”. 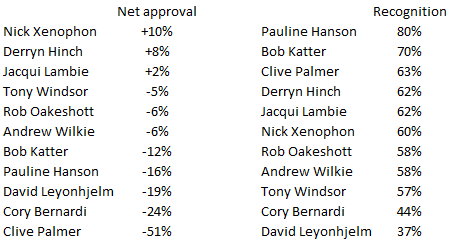 As the example of Kennedy MP Bob Katter indicates, the familiar breed of country independent offers little to enthuse voters in the city, no doubt explaining why such members are invariably to be found in rural lower house seats rather than the Senate.

Nor do the figures leave much room for mystery, if any still remained, as to why Clive Palmer decided to quietly wind up his short-lived political operation last week.

However, it’s also clear that a lot separates the various contenders both in terms of name recognition and popularity, particularly in the case of the present occupants of the Senate crossbench.

Above all, last week’s Essential results argue against the surprisingly popular notion that Malcolm Turnbull’s prime ministership has created an opening on the hard right for a local incarnation of Donald Trump.

Of the poll’s six subjects, the lowest rated were newly minted Australian Conservatives Senator Cory Bernardi, whose delusions about his own electoral appeal have been noted here previously, and David Leyonhjelm of the Liberal Democratic Party, who appears to take a certain pride in defying the popularity-courting maxims of electoral politics.

Leyonhjelm’s and Bernardi’s struggles to reach double-figure approval ratings partly reflect low name recognition — with the proportion of respondents unwilling to commit, amounting to 63% in Leyonhjelm’s case and 56% in Bernardi’s.

That’s certainly not an issue for Pauline Hanson — but her sympathisers, who are so often characterised as silent, are clearly not a majority.

Only 32% of respondents reported a favourable view of Hanson, and of the 48% who disapproved, 33% did so strongly.

Hanson’s approval rating is matched by Jacqui Lambie, whose pro-welfare battler rhetoric has contrasted sharply with the hardline austerity politics that Hanson has been championing of late.

However, Lambie has benign negative ratings of 17% mild disapproval and 13% strong disapproval, and would clearly eclipse Hanson on approval if not for the recognition factor.

Still more popular are Derryn Hinch, who enjoys the residue of his once-high media profile and has done nothing as a Senator to damage his generally benign image, and Nick Xenophon, whose successes in securing pork for his home state don’t appear to have upset those outside it.

As the electoral success and personal popularity of Xenophon and Hinch illustrates, many voters disgruntled with the major parties would favour a centrist honest broker if they perceived a sufficiently competent option to be on offer — a role that was performed with great success for over a quarter of a century by the Australian Democrats.

However, such players face the perennial challenge of securing and maintaining the attention of a media that considers a polarising fringe-dweller like Pauline Hanson a better story, regardless of the manifest limits of her appeal.

Both of these ‘popular’ crossbenchers are just liberal-lite in reality…wouldn’t give either of them the time of day, let alone my vote!!

Don’t mind Bernardi at all actually. He seems to have a lot of support.
Hinch, no. Lambie, no.

Most of them are disgruntled liberals or nationals,not a real leftie amongst them.Where’s the advocate for ridding Oz of the two tiered health system and education system or pushing for real freedom of speech with reform of libel laws?
We need a Whitlam type now,not petty little fudgers with minor amendments winning small battles in the Canberra bubble.

‘Pauline Hanson — but her sympathisers, who are so often characterised as silent, are clearly not a majority’ – so reassuring.