Lest we forget Anzac outrage. The Daily Telegraph had a huge splash today on nightclubs promoting their events tonight with scantily clad pictures of men in military gear, labeling the events a “disgrace”. It’s not the first time the word Anzac has been appropriated for commercial gain, with Zoo Weekly and Woolworths both previously guilty on that front. Interestingly, the Tele only picked two events to focus on — both from gay clubs. 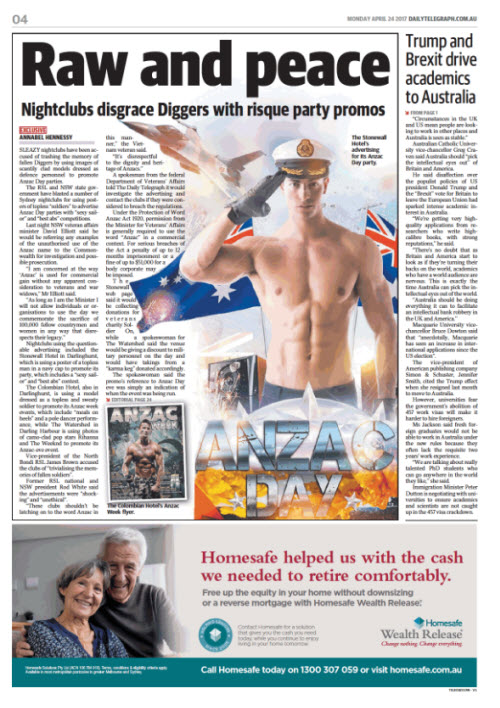 The story didn’t feature any of these events also on tonight — easily found by Twitter users. There are clubs with “two up and techno” and a few offering prizes for best “camoflauge” costume. 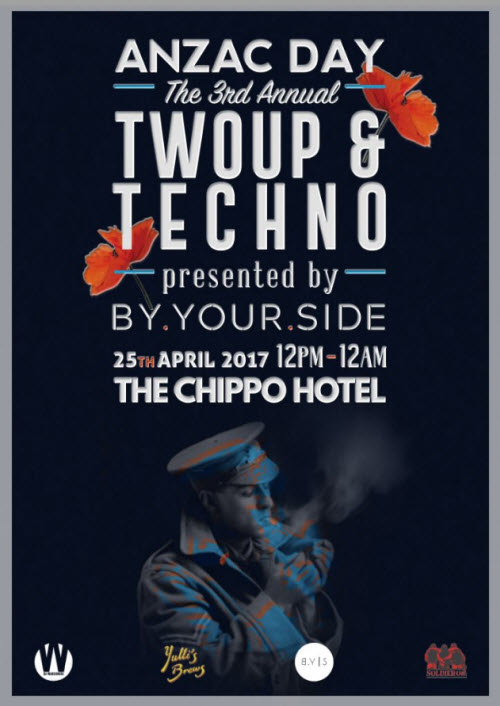 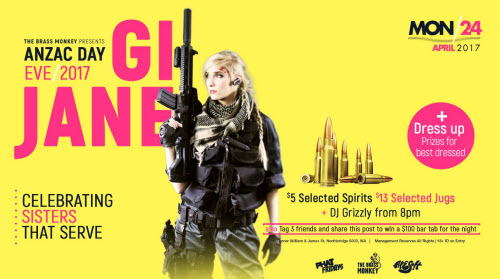 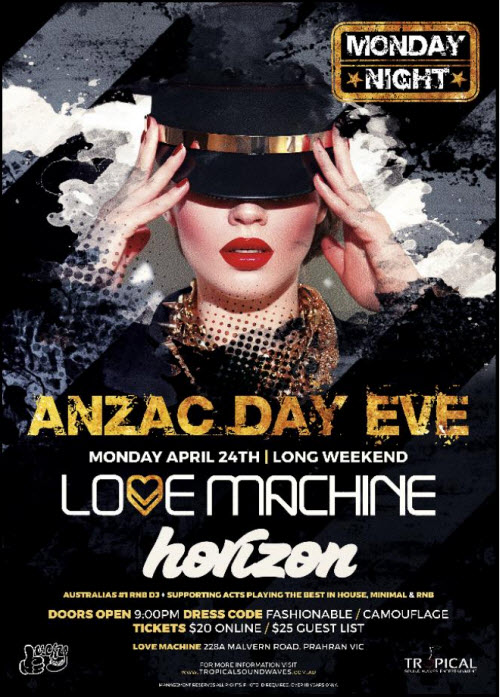 Then there’s the strip club. “Let our uniformed ladies show you their appreciation” reads the flyer. 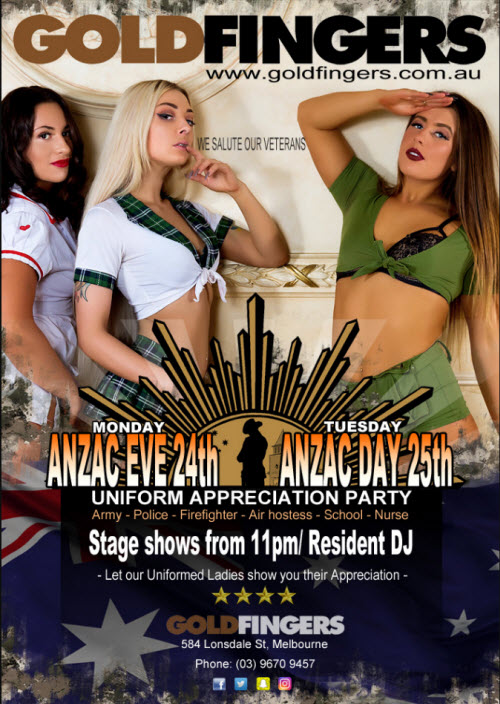 The use of the word “Anzac” is highly protected, and using it without permission from the Department of Veterans Affairs can result in huge fines or even jail time. Where will these clubs end up?

Guess who is in town? Noted policymaker-by-Twitter and owner of Tesla Elon Musk is in Australia, posting a photo with girlfriend Amber Heard on Instagram. It was just last month when Musk and Prime Minister Malcolm Turnbull were tweeting each other over a possible battery farm to solve South Australia’s battery issues, leading to a string of announcements from the South Australian and federal governments. Musk posted this pic on Instagram this morning: 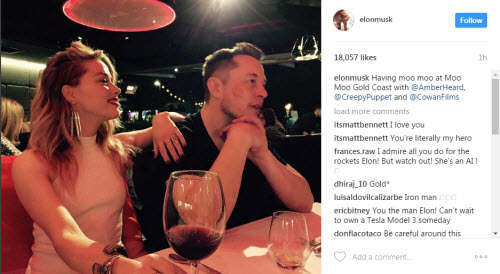 Amber Heard is on the Gold Coast filming Aquaman, but it looks like her dogs Pistol and Boo have been left back in the US instead of also coming to Australia (because that went so well last time). Heard and actor Johnny Depp, who was the target of Deputy Prime Minister Barnaby Joyce’s ire last time around, have split, and gossip mags have taken this photo as confirmation of the new relationship.

Will our politicians be falling over themselves to do business with Musk while he is in Australia?

And would Musk have faced the same red-faced barrage from Joyce had he been the one travelling with Heard and her illegally imported pooches?

Hughesy hits the right note with The Wrong Girl. Embattled Seven CEO Tim Worner was not present at Australian TV’s night of nights yesterday as he was the butt of jokes for Logies presenters.

In his opening monologue, comedian Dave Hughes was introducing gold Logie nominee Jessica Marais, star of Ten’s The Wrong Girl, when in what at first looked like a mistake, he said it was a Seven Network program.

“Channel Seven were working on a pilot of The Wrong Girl, that was starring their CEO Tim Worner, and that was more a reality show. He picked the wrong girl to mess with. It was going really well, but they thought it was too expensive and they tried to cancel it.”

Over the audience laughing, Hughes yelled, “I’ve never worked on Channel Seven, and I probably never will!”

Seven West Media is currently embroiled in a bitter court battle with former executive assistant Amber Harrison, whom the network is trying to stop from publishing embarrassing details about her affair with Worner.

Amber Harrison was ready for the attention during the awards ceremony — she had tweeted to Hughes earlier in the day offering her lawyers should he need them, and she responded to the joke shortly afterwards, saying she would “own” the label of “wrong girl to mess with”. 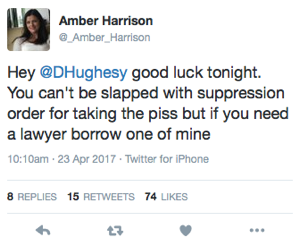 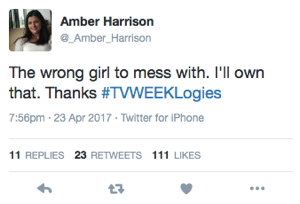 Funny guys Hamish Blake and Andy Lee did not leave Worner alone either, presenting the award for Best Reality Program with a skit using Married at First Sight-style “science” to couple up stars. There was Nine weather presenter Bec Judd and newsreader Tony Jones, a reference to an awkward on-air attempt by Jones to kiss Judd as she headed off on maternity leave. Also matched was Richard Wilkins with himself. They left the audience hanging, though, as to who had been matched with Worner: “State secret, that one,” Blake said.

Jobs and growth for copywriters. When Prime Minister Malcolm Turnbull tried to convince voters he embodied the best parts of the Abbott government, while ditching the bits that people hated, the slogan he went with was “continuity with change”. The three words were lambasted as having no meaning — and they were exactly the same as a slogan from US comedy Veep. Now a tipster tells us that last year’s election slogan “jobs and growth” has also been seen in the US. Our tipster sent us this picture from the US Chamber of Commerce in Washington DC, taken during last year’s presidential election campaign. “Jobs and growth” was the catch-cry there as well: 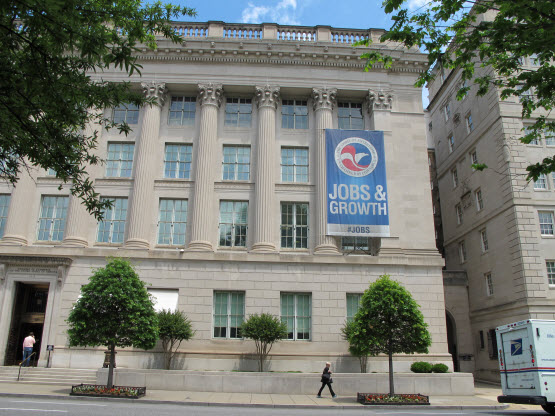 Because there weren’t any gay Anzacs, oh no.
http://www.smh.com.au/national/a-secret-history-of-sexuality-on-the-front-20121220-2bp9m.html

“And would Musk have faced the same red-faced barrage from Joyce had he been the one travelling with Heard and her illegally imported pooches?”

Almost certainly. You really don’t understand or appreciate how important our quarantine system is to Australia’s agriculture industry and the economy in general, do you?

“The use of the word “Anzac” is highly protected, and using it without permission from the Department of Veterans Affairs can result in huge fines or even jail time. Where will these clubs end up?”

They should be given positions on the RSL club board, they’d fit right in.