Did the Herald Sun invent the Sudanese youth Apex gang?

Was a gang of violent Sudanese youths taking over the streets of Melbourne?

If you take a passing interest in Melbourne’s Herald Sun newspaper, you’d be aware that young Sudanese migrants have been terrorising the suburbs with carjackings and violent robberies over the last year or so.

Dedicating 28 front pages over a year to the “notorious” Apex gang, the Hun has gone hard in pushing the law and order agenda, bolstered by state and federal politicians.

But according to Victoria Police, the “gang” (which they also say was never really a proper gang with a clubhouse or colours) was always mostly made up of Australian-born offenders, and it’s now broken up.

“Victoria Police has stated in the past that youth networked offenders come from a range of backgrounds … a large cohort of these young people are Australian born and they are from a mixture of ethnicities,” Victoria Police told Crikey in a statement.

So where did the tabloid get the story of the Sudanese gang from? The Herald Sun did not fabricate its stories. The gang first caught the tabloid imagination of the Hun after violence attributed to young criminals marred the Moomba festival in March 2016. Police charged 24 people with offences over the rioting, including 20 minors. Reports since have included political stories, police reports and court stories, as well as opinion and editorial. And crime statistics reported by The Age today show the number of carjackings and aggravated burglaries committed by Sudanese-born offenders in Melbourne has increased.

In the year following the 2016 Moomba rioting, the Herald Sun has run 173 stories that reference Apex. Of those, 37 were opinion pieces or editorials. By comparison, The Age published a total of 34 stories over the same period that mentioned the Apex gang, with none running on the front page. Almost a third of the Herald Sun‘s stories also included the descriptors “Sudanese” or “African”.

Victoria Police always acknowledged that the gang existed, but the organisation told Crikey they had also been clear that these offenders were from a variety of backgrounds.

Crime statistics released in September 2016 revealed that youth crime had actually dropped, but the Herald Sun continued its campaign, with 12 front pages running between the release of those statistics and the end of February, including these two: 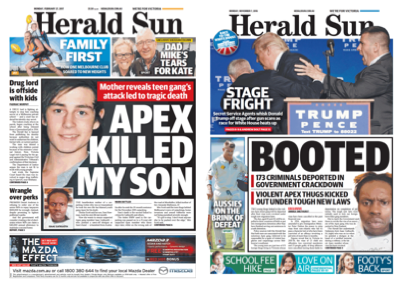 Politicians have helped push it along. In November, Victorian opposition corrections spokesman Edward O’Donohue put out a press release claiming he was living in a “crime tsunami”, and in December issued a statement repeating that Apex was “running amok”. In dozens of press releases about crime in Victoria issued since the Moomba riots in March 2016, O’Donohue has repeatedly referred to Apex and “Apex style gang attacks”. Federal Opposition Leader Bill Shorten also weighed into the debate on Sydney’s 2GB radio with Ray Hadley in February this year, saying he had no doubt that “the Apex gang is an issue in Victoria”.

Federal Liberal MP Jason Wood is chairing the committee, and he has suggested federal intervention to target the Apex gang.

According to University of Melbourne criminology lecturer Mark Wood, sensational media coverage can increase crime. Writing for The Conversation:

“While the tabloid media certainly didn’t create Apex, it has helped transform the group into a brand. Such sensationalised news coverage has fostered several crimes committed under the group’s name by individuals only loosely, if at all, connected with the collective … Describing Apex as ‘notorious’ or ‘infamous’ and sensationalising its members’ exploits acts as free publicity and a recruitment drive for the group. Throughout 2016, as the tabloid media ramped up its coverage of the group, the number of individuals affiliated with Apex grew. It had fewer than 200 members at the beginning of 2016, but is now estimated to have grown to upwards of 400 members. Members attribute Apex’s growth to it becoming better known.”

And this was reflected by Patton last week in his evidence, but that bit was missing from the Herald Sun‘s coverage. It instead focused on the fact that Apex had now been “contained”.

And by “youth violence increasing”, the tabloid referring to a comment that the crimes police are dealing with are more violent, not that there is more of it. 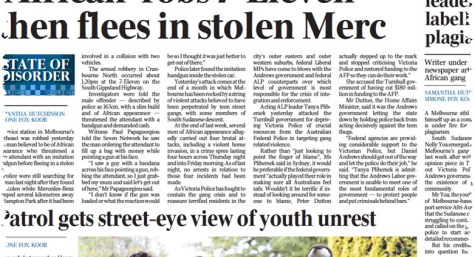 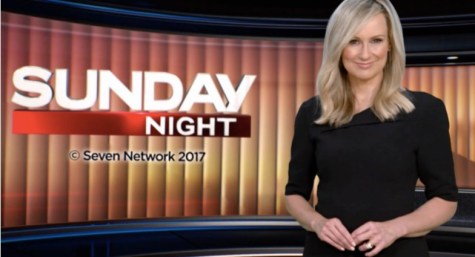 “Herald Sun editor Damon Johnston told Crikey he believed his paper’s reporting had been accurate and proportionate.”
While there is an issue with general crime, gang/African dimension is mostly manufactured outrage. Herald Sun is great at manufacturing outrage. Look at CFA issue for an example. Anything to attack state Labor government, which Herald Sun is absolutely obsessed with.

I don’t agree with the HR scaremongering but you also can’t argue with the stats.
http://www.abs.gov.au/ausstats/abs@.nsf/Lookup/by%20Subject/4517.0~2014~Main%20Features~Country%20of%20birth~7
Pretending there isn’t an issue won’t help it go away.

You know what they say about statistics…
I’m not saying there’s no problem, there may well be although the source of the problem is likely different from what the Herald Sun thinks it is. But it’s also highly likely that the numbers are skewed because of the relatively small sample size (there are not that many Sudanese kids in Australia). It also does not say anything about whether there is any racial profiling taking place for example. Nor whether Australian born kids are likely to be able to afford better lawyers. Plus that chart is three years old.
I do have a great deal of time for statistics. They can be a fantastic tool to illustrate things, but they also always need to be read with caution.
It’s interesting though how different people can interpret the same statistic entirely differently. I would read a statistic like this as “there is a problem here, this is probably caused by failing support services, poverty, etc.” whereas the Herald Sun would likely interpret this as “Sudanese kids don’t fit in”.

No arguments with me on that.

Funny how no one mentions Samoa or are they all league players? Also interesting is the low figure for Afghans and Iraqis. I agree with you Saugoof, but having, apparently. solved the problem does not match Murdoch’s needs. It is like destroying houses and hospitals in Iraq, great recruiting for the bad bastards.

The Hun ensures that “black” images are prominent in all the photo journalism accompanying its articles. Now there is no doubt that some kids from horrific war torn backgrounds are prominent in these attacks, but lets tackle education and job issues for these young arrivals before condemning them to incarceration and a life of crime.

Any particular reason that there was no mention of the name of the prime offender for his relentless beating of the racist, xenophobic hate drum, on his “most widely read column in Australia”, his 4 nights pw on Macquarie radio & his TV show?