This little cafe goes to market. The licence for iconic and much-beloved Aussie’s cafe in Parliament House will go to market in 2020 as part of a refurbishment of the retail precinct of the building in that year. In response to a question on notice, the Department of Parliamentary Services (DPS) said Aussie’s contract would go to market:

“There are no plans by DPS to operate the ‘Aussie’s area’. The retail precinct, which includes Aussies, Westpac and the former FcM Travel space, will be refurbished in 2020 and licences offered to market for a range of operators to provide services within the private areas.”

MPs and senators across the Parliament are concerned that DPS might be homing in on Aussie’s after taking over running the Trough and the coffee carts in Parliament at the end of last year. DPS also released some of the report it commissioned into the retail offerings in Parliament, which recommends, among other things, to have a formal supply of prescription and medical supplies available in Parliament, better supply of groceries to Parliament, and to move the post office from the first floor of Parliament to next to the gift shop. It also recommends a redesign for the front entrance to force visitors to exit through the gift shop. How democratic.

Sexy or ‘fucking dumb’? Co-deputy leader of the Greens Scott Ludlam has become the latest pollie to be featured in GQ magazine — although unlike his leader Richard Di Natale, he wasn’t “styled” by the magazine, so he kept his socks on. Not a skivvy in sight. 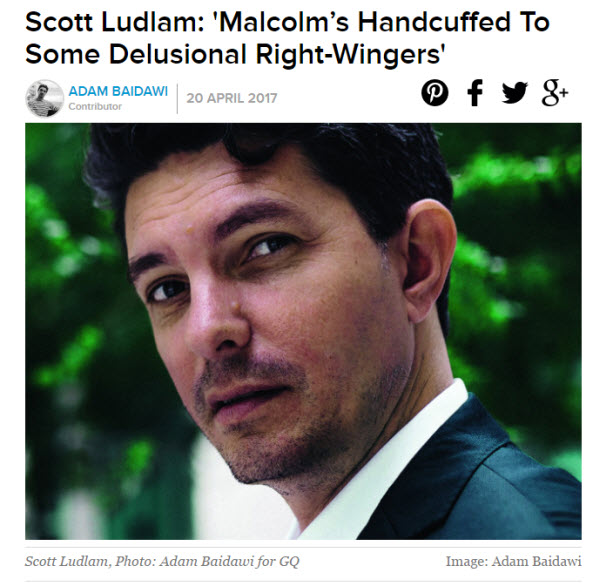 The Q and A with Adam Baidawi also references Ludlam’s title as sexiest male politician, as voted by Crikey readers in 2016 and 2015. The Western Australian Senator doesn’t seem so keen on the title:

SL: It was a prank. That’s my official comment on that.

SL: What’s the next question?

Before Ludlam held the crown, it belonged to the one and only Malcolm Turnbull, who became less popular after actually gaining power. Maybe he will have to deal with yet another year of people thinking he is good looking.

Latham rises again. Dumped Sky News presenter Mark Latham has been making the “Outsiders” brand work for him all on his own, but next weekend he will get the chance to be reunited with one of his co-presenters, Ross Cameron, in an “Outsiders” discussion at the ALS Friedman Conference. The conference is held by the  Australian Libertarian Society and the Australian Taxpayers’ Alliance. The conference features the — ahem — luminaries of the Australian right, with Calum Thwaites, promoted as “the QUT student persecuted under s18C” and Daisy Cousens as a “celebrity”. Senator David Leyonhjelm will host a panel on guns, and his fellow crossbencher Cory Bernardi will speak as well. One of the headliners from overseas, Grover Norquist, famously said he wants the US government to be so small it can be “drowned in a bathtub”. Not to be missed, truly.

Burying the lede at News Corp. News Corp releases its third-quarter financial results on May 9 in the US, which is May 10 in Australia. The related company, 21st Century Fox, releases its third-quarter report on May 10, which is May 11 in Australia. The 2017-18 federal budget will be handed down on the night of May 9 and will consume local interest for the next few days. News Corp is in the process of cutting hundreds of jobs from its Australian newspapers, and 21st Century Fox has just sacked star Fox News host Bill O’Reilly, so there is no shortage of topics to talk to the Murdochs about at Fox. But it will be a manic news week in Australia, so will the pressing questions actually be asked? And will the answers (or lack thereof) get a decent amount of coverage?