Can your boss spy on you at work?

If you send a personal email at work, can your boss read it? Can your workplace install hidden spy cameras? Can your employer listen in on your phone calls? What about Facebook messages?

What have done today that you wouldn’t want your boss to see?  Have you taken a private call, sent a Facebook message or checked your private email on your lunch break?  And if your boss recorded you doing it without you knowing, what would your rights be?

The legislation covering surveillance and privacy in the workplace is a patchwork from state to state, with the federal Privacy Act offering a general prohibition on the recording (audio or optical) of “private acts”, and state-based legislation regarding surveillance (if there is any) filling in the gaps. Only New South Wales, Victoria and the ACT have specific laws regarding workplace surveillance, and even those are limited. The Fair Work Ombudsman, in the absence of any real enforceable laws, provides a “best practice guide.” In most cases, for example, an employer installing hidden cameras in the work place is not illegal — although employees generally have to be told it’s happening.

The Surveillance Devices Act 1999 (Vic) specifies that it is an offence to use an “optical or listening device to carry out surveillance of the conversations or activities of workers in private areas like workplace toilets, change rooms or lactation rooms” — anywhere else in the workplace is covered by general restrictions on surveillance.

The Workplace Privacy Act 2011 (ACT)  and Workplace Surveillance Act 2005 (NSW) have similar restrictions — they both apply to optical, tracking and data surveillance devices (the legislation doesn’t mention listening devices). They both requires an employer to notify employees if one of these types of surveillance devices is in use (the ACT act also requires consultation with employees if surveillance is to be introduced in the workplace). Covert surveillance (surveillance that employees are not told about) is allowed if the employer has received an authority from a court — which will only be granted to determine if an employee is breaking the law, and is subject to various safeguards. For example, there is a 30-day time limit on the surveillance, and surveillance records must be destroyed within three months unless they are required for investigative or “evidentiary purposes”. The surveillance of employees in places such as toilets, change rooms, nursing rooms, first-aid rooms and prayer rooms, (as well as surveillance of employees outside the workplace) is also prohibited.

The legislation that does deal with workplaces is almost entirely woefully outdated. Only the NSW Act covers employee email and internet access while at work – neither Victoria nor ACT legislation mentions it.

The Australian Law Reform Commission, in its 2014 report on threats to privacy in the digital age, has a small section dedicated to recommending uniform workplace surveillance law, concluding:

No action on uniform workplace surveillance has been taken, or even seriously discussed at a federal level as yet. In the workplace, as with Andie Fox, metadata retention, and other areas, our right privacy is far from a government priority.

Phone tapping in the Top End: a loophole in the law, or just a ‘beat-up’? 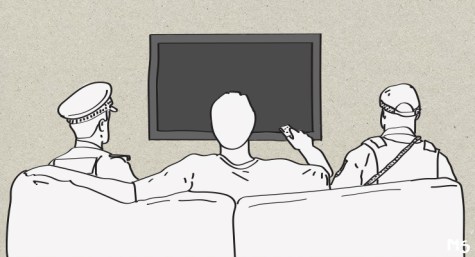 No matter who wins Hunted, Channel 10’s new surveillance game, we all lose

Bit different to the old days. I had a boss who would throw open the women’s change room door and shout “I’m in the boudoir” laughing heartily to let us know it was all good fun.