Taxpayer-subsidised cruelty. While Easter is traditionally a time for Easter egg hunts, with littlies roaming the shrubbery looking for that telltale glint of foil that signals a chocolate treat, some people have different ideas. For the last two weeks, Greyhound Racing Victoria has been hosting an Easter School Holidays Kids Program at dog tracks across Victoria, which culminated in an Easter Sunday event at Bendigo. The kids were entertained by video games (just like at home!), facepainting, karaoke and “Turbo — Greyhound Racing Victoria’s friendly mascot” also made “a special appearance, with Turbo themed activities on offer including a jumping castle, inflatable slide, activity bags and photo opportunities”. 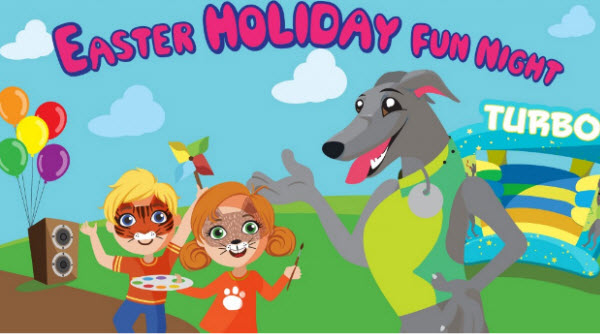 Better yet, this was all done with taxpayers’ money — more than $126,000, given by Racing Minister Martin Pakula, who offered the ringing endorsement that the days “will keep the kids entertained”. Wasting more than $120k introducing kids to gambling is of dubious social benefit, of course, but we wonder if the days should include a more realistic portrayal of the “sport” — maybe a special appearance by Eunice the Euthanised Racer, with the kids getting to stick a needle into her heart? Or perhaps Barry the Bloody Bunny can be chased by the kids? Too much, you think? Here’s Greyhound Racing Victoria’s most recent annual report, where it admits more than 3000 dogs were killed by the industry in 2015-16. And they’re just the ones officially recorded. Maybe the Easter School Holidays Kids Program should have had a display of the eight dogs killed by the industry that day, and each and every day of the year.

Border Force runs silent. After launching last year, the Australian Border Force podcast seems to have fizzled, with no updates since December. The podcast, which consisted of three episodes covering the origins of Border Force, the Ocean Shield ship and tobacco smuggling, was supposed to be “a series bringing you the latest news and information from the operational arm of the Department of Immigration and Border Protection”. The only problem is that the series seems to have stopped at just the three episodes. We doubt it’s part of cost-cutting — a freedom of information request by Crikey last year showed each episode cost just $12 to make. In guidance on the podcast also released under FOI, we learnt: “It is essential that the podcasts aren’t propaganda tools or a personal vehicle or management vehicle. Podcasts aren’t a way to ‘spin’ our message, they are a window into the ABF, and should be treated with respect.”

We have two theories about what has happened with the ABF podcast. Either the producers of the Border Force podcast couldn’t come up with any content because they were told all the interesting stories were “on-water matters” or they have their very own S-Town series in the pipeline and we will get seven episodes all at once in about three years.

Q Society fights Marxism and Nazism all at once. The Q Society has used the decision by anti-Islam activist Ayaan Hirsi Ali to cancel her Australian speaking tour to link two of its enemies in one blockbuster night: “Islamism and Cultural Marxism — A Marriage of Equal Opportunity?”. The event to be held on Sunday will feature unnamed “outspoken members of Q Society”. No word on where the event will take place or who will speak — only people who cough up $10 for their ticket get that info. Ms Tips found the advertising for the event interesting though; apparently it’s everyone else who should be compared to Nazis, not the group that exists on a solely anti-Islam agenda:

“Over the past years we have seen an increasingly anti-democratic phenomenon: Radical elements in our society believe it is their right to ostracise, bully and attack people who choose to listen to speakers and debate topics they may not agree with. The intimidation extends to venue operators and commercial service providers. The intent, to shut down other views. The Nazi brown shirts in National-Socialist Germany used the same methods.”

Where, ABC? Viewers of the ABC’s News Breakfast program are being treated to weather updates on some previously unknown towns and cities.

When weatherman Nate Byrne is presenting in front of screens showing graphics of the forecast, the lowercase ‘E’s look like ‘O’s, giving us the new Australian towns and cities of Broomo, Moroo, Porth and Goolong. 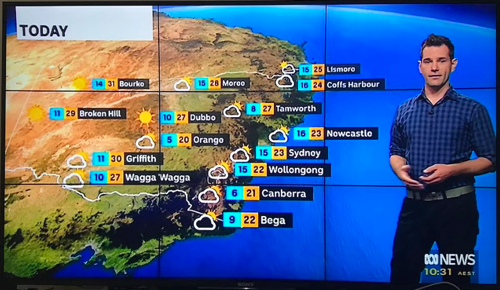 It has, of course, prompted complaints from viewers on Twitter, who have also complained of difficulty reading the temperatures after the revamp, launched last week.

Would Crikey care to comment on the wastage in the thoroughbred industry, as a matter of fairness?

The coastline looks odd, too. Is it a Morcator projection?

That greyhound kiddie propaganda is sick. Its bad enough that the industry won in NSW, without resorting to the McDonald’s “get ’em young” technique with Govt money.

The real fear of the greyhound ban in NSW wasn’t about a tiny group catering to a few working class oiks but because exactly the same principles – abhorrence of animal cruelty – apply to the huge and orders of magnitude wealthier horse racing industry.