A milk bar owner has put up a sign that is, yes, racist. But the same tabloids that hyped the Apex gang and defended Bill Leak are absolutely delighted to have found someone they can call a racist.

Jesus died for somebody’s sins, but not for those of Australia’s most squalid content providers. This past Easter weekend, Seven and News Corp were among those hoisting a Melbourne milk bar owner up to the hill at Golgotha. If you weren’t yet sufficiently convinced that the emotion of outrage had been drained of all its meaning by corporate media, have a little sniff of what News hypocritically exudes: racism is “shocking”.  Odd for a company that so routinely finds racist cartoons courageous, or even amusing.

According to several reports, a small business proprietor in an outer Melbourne suburb had affixed a sign to his business window prohibiting entry by “14-18 year old blacks” into his store. Of course, this act of communication, since removed, is appalling. It was also one intended for a limited audience. Were it not for interest by 3AW, the Daily Mail and others, the hostile sentiment would never have been amplified. 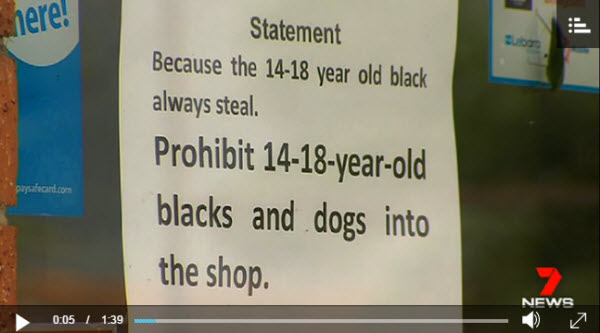 If we lived in a nation where acts of racist speech were an exception and not currently a reliable feature of public “debate”, we could forgive this wide reporting. If this milk bar sign were something singular and not an echo of the newsstand posters displayed within it, we could all agree that this man had acted contrary to the dominant will. He had not. He had simply acted per the relentless guidance of much of our local media, who in turn lost no time in declaring that this guy had the broken moral compass.

Racism is just terrible. Just to show us how terrible racial slurs are, news.com.au scoured the internet for a few and printed them verbatim. “The racist note displayed at a Melbourne milk bar was bad enough — but then came the online comments from ordinary members of the public.” And here they all are! That which follows offers an audience accustomed to reading defence of “the right be a bigot” a few guilt-free minutes of pure racist reading. It was a bit like offering critique of sexist pornography through the generous display of boobs. Ooh. Isn’t it dreadful!

You can have your hate cake and eat the evidence too, it seems, through a range of media moments that simultaneously scold and uphold racism. However apparently livid the reports were at the cheek of this milk bar proprietor, they largely legitimise the fear of the so-called Apex gangs they have been courting for months. Crime rates in Victoria, says The Australian in its milk bar report, are “leaping”. It is also true that in all Australian states, excepting Western Australia, that crime has declined over the longer term. It is also true that any annual “leap” in crime may be attributed to an increased willingness to report, especially in recent years around intimate partner violence. But, heck. Never permit a tedious thing like a clear statistical trend to obstruct the real job of journalism, which is, as we know, to confirm bias and maintain unreasonable fear.

And, of course, to cast the news provider as a purveyor of pure reason. In ascribing to a small business owner all the sins of unreasonable racism, these outlets absolve themselves. If you make a little deposit of ostensible anti-racism, you are free to withdraw in future. We’ll charge a guy in outer-Melbourne for buying the fear that we sell. Build a little credit and spend it on lavish defence of 18C on Wednesday.

It really didn’t hurt at all that the maligned racist at the centre of all this craven fuss was not of Anglo-Celtic heritage. If the guy’s name had been Kev, his skin white and his accent more acceptably heroic to the ears of Seven producers, a film crew might not have been dispatched to Melton. But this man was an Asian-Australian, and so the racism of which he is charged can be framed as even more distant from its intended audience. This is not the sophisticated racism of an IPA fellow who argues so manfully for freedom of speech, but the simple racism of a man from a nation less liberal than ours.

Racism is “shocking”, insist companies that have for so long urged powerful figures to stop boats, guard against “sharia” and end the career of Adam Goodes. Racism is a scourge, say outlets that valourise the brutal ideology of Ayaan Hirsi Ali. Racism is unacceptable, bleat news sites who otherwise serve the idea that loathing for others is acceptable.

If public comments by men like Steve Price, Eddie McGuire and the late Bill Leak had received one-tenth the serious scrutiny that an A4 printed page on a small street in Melton had, we might be able to read this tosh with a straight face.

It certainly seems to me that the most racist of our public citizens are often those with names reflecting the likelihood of recent European migrant background eg Bernardi, Mirabella(Panopoulos?) Abetz. It is also true that many overseas cultures are racist in their own ways. We try to belt a few rough edges off here (the little kids at my school don’t seem to do racism, some of the older ones do alas). This kind of rubbish is given legitimacy by the (and I am sorry but they are) racist scum that inhabit right wing politics in this country. Including senior figures in the coalition.

This is the problem there seems to be an unwritten set of “rules” or expectations in Australian society, that if you reflect back to those racists whether they be in the public eye like you mentioned, or like this milk bar owner there seems to be this context with which this type of racially motivated attitude is dealt & observed in, all most a manner where there is an expectation that if you’re an everyday schmo, just running your business like this guy is, that it is unacceptable that he can reflect back what he is seeing & hearing in relation to who & what he excepts in respect of racial make-up of his business’s customers. My quandary is how do we still condone & live with this unspoken acceptance that such well known commentator’s like Eddie everywhere (McGuire) or Steve Price or the odious Bill Leak, or anybody famous, is almost given a green light to express their racist views (as long as a “heartfelt apology” or some excuse is proffered for their error), & the media glosses over or allows a level of acceptance that Rupert’s minions deem as giving them a rap over the knuckles in “their media”, these people have been getting away with it for years they tout so much nonsense, it is impossible to take this form of media a) seriously or b) accept they actually have the capacity to accept they cause more problems within our society than they realise or are willing to accept responsibility for.
If these overly opinionated, & over payed BS monkey’s, actually stopped for a minute & realised that what they spout is finding its way into much of Australia’s layers of societal thinking & behaviour, by creating a level of morality that is not only extremely conservative, but that we may not have seen since the 50’s Would they like Steve Price realise that their attitudes to other people & other races actually change? It is obvious to me that many people in our society (like Mr Milkbar) aren’t necessarily smart enough or aware enough to tell the difference between what passes for opinion & what is actually fact. I do believe these people like Miranda Devine, Mark Latham, Tony Abbott, and of course the One Nation cabal, really need to look at finding different careers as them & those of their ilk are often the cause of many of the racially motivated resentment we are seeing nowadays.
I often reflect on what my Grandma always used to say (this is still very appropriate) if you don’t have anything nice to say, don’t spoil things by opening your mouth, that is the problem with Newscorp.

@Lesley: ” if you don’t have anything nice to say, don’t spoil things by opening your mouth, that is the problem with Newscorp.”
Newscorp would save a lot on ink if they did that, and merely delivered blank paper. 🙂

And yes, I’m not being very nice to NewsCorp

I’m no friend of “Eddie everywhere (McGuire)”, but labelling him as a “racist” based on one foolish comment is unfair. I’m sure you could find much better examples than him.

I don’t think anyone did?

Interesting discussion. Important issue, even if complex and difficult in which to engage.
Yes, Helen, an earlier comment here did mention Eddie McGuire in the same paragraph as Steve Price and Bill Leak. You didn’t.
It probably is helpful, on balance, to identify the racists in public life – in politics, academia, show business, sport and the news media.
A sort of a collation was attempted in another outlet at the time of the Adam Goodes matter back in August 2015. Those named then included Alan Jones, Andrew Bolt, Miranda Devine, Rita Panahi, Paul Murray, Paul Sheehan, Neil Mitchell, Professor Barry Spurr and ex-footballers Sam Newman, Karl Langdon and Jason Akermanis.
Eddie McGuire, although involved, escaped opprobrium on the facts.
https://independentaustralia.net/business/business-display/right-wing-media-falsehoods-at-heart-of-racial-hatred,8032

Islam may be institutionalised & systemically misogynist but racism is the very essence of Hinduism – the caste system is colour coded.
Religion is, by definition, about defining the Chosen and excluding the rest.

Right, which is why Jesus implored his disciples to spread the teachings to absolutely everyone. What a ludicrous generalisation.

It’s funny watching how vigorously they guard their own m.o. nest against plagiarists?