Defence stuffs up, One Nation misfires at ABC

We’ve done some digging on One Nation’s weird tanty over the ABC and Andrew Probyn’s “leaking” of a pending trip to Afghanistan by a parliamentary delegation consisting of two government, two opposition and two One Nation MPs.

According to Defence, such delegations are “open to all Federal parliamentarians who can apply to take part … In the event an activity is oversubscribed, a ballot is conducted to determine the participants. A ballot was not required for this particular activity.”

That is, only the government, the opposition and One Nation applied to participate in the trip — at least according to Defence. The trip was planned to coincide with Anzac Day — which presumably explains why Pauline Hanson and Brian Burston are so furious about its cancellation, because the trip would have provided images of Hanson spending The One Day of the Year with Australian soldiers, kitted out in body armour on the frontline against jihadists.

But who leaked the trip to Probyn? Someone in Defence, or one of the other four participants, or perhaps their staff? Even someone in One Nation? We understand the source is someone at Parliament House, not at Russell Hill, but it’s not clear exactly who. But it gets a little more interesting: Defence actually has a brochure on its website about the parliamentarian program, including details of the trip to what is called “the Middle East”. Unlike other activities, there are no dates indicated for that one in the current brochure, which makes sense from a security point of view.

Except … Google Cache shows the brochure used to have the dates indicated for the Middle East trips. 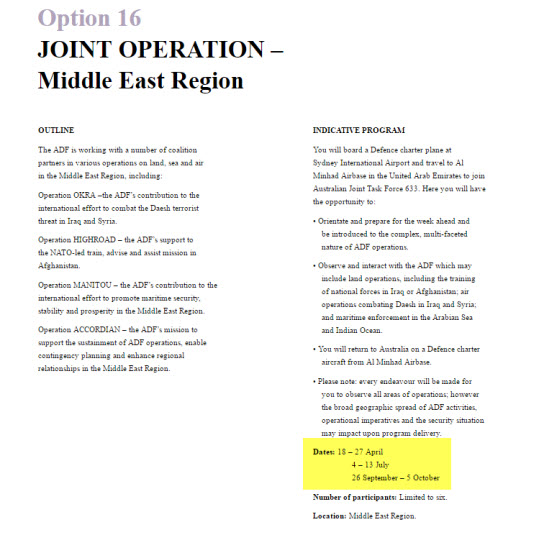 So Defence itself was advertising publicly that Australian parliamentarians would be visiting the region on specific dates. Maybe the enraged One Nation should be demanding that Defence’s funding be cut, not the ABC’s.

Why on earth are our secretive ADF advertising for jaunts to war zones? A bit of covering of arses and photo ops?