One Nation's Afghanistan tanty ... how many coffee machines does the Productivity Commission have? ... Herald Sun does Murdoch bidding ...

Burston’s tanty doesn’t match the issue. As we know, One Nation has taken a liking to issuing threats to the government to comply with its demands or get no One Nation support for its legislation in the Senate. The latest threat is about the ABC — One Nation is demanding a massive cut to the ABC or it won’t support the government’s bills. Why? Because, One Nation claims, 7.30‘s Andrew Probyn caused the cancellation of a trip to Afghanistan by a parliamentary delegation that would have consisted of two government, two opposition and two One Nation MPs — senators Hanson and Burston.

That got us wondering exactly why a delegation composed like that was going. One Nation is a small crossbench group in the Senate, but somehow it scored not one but two spots in a six-person delegation. What about other crossbenchers — the Greens? NXT? Jacqui Lambie or Derryn Hinch? It’s almost as if Defence is treating One Nation as the third major parliamentary party (we’ve asked Defence Media, but unsurprisingly they haven’t replied).

And why the hysterical reaction, which includes One Nation “banning” the ABC and Burston actually threatening Probyn on Facebook?  If you’re not in the Defence or Foreign Affairs portfolio, a trip to Afghanistan primarily consists of opportunities to don body armour and have your photo snapped with Australians troops. Maybe Hanson and Burston are furious that they’ll miss out on valuable PR material for the next campaign?

TPG finally gets its mobile network. Communications Minister Mitch Fifield has announced that TPG and Vodafone have snapped up the remaining blocks of 700MHz spectrum left over from the switch from analog to digital TV several years ago. TPG paid a hefty $1.2 billion for the spectrum, which is noteworthy because TPG doesn’t have a mobile network of its own yet.

TPG has been quietly buying spectrum licences for years and sitting on them, with expectations rife that the company would begin building its own 4G mobile network, rather than just reselling white label mobile products from other networks. TPG has talked this down, saying a network was still in research and development mode, but today finally showed its hand and told the ASX it would be building a network with 80% population coverage over the next three years with between 2000 and 2500 mobile towers.

The company told the ASX it would look to get about half a million subscribers.

Vodafone buying up some of the spectrum is also interesting in that one of the bigger rumours in the telecommunications industry would be that TPG would buy out Vodafone’s assets from its global parent companies. Either way, once TPG gets into mobile, it will be close to giving Telstra a run for its money as Australia’s largest telecommunications company. Telstra is more focused on becoming a global tech company, so it probably isn’t too concerned.

Coffee coffee coffee, buzz buzz buzz. In the many valuable questions put to our government departments and agencies as part of Senate estimates, there are also the small things, which can make for some fun reading. For some reason Labor Senator Catryna Bilyk has asked many departments if they have coffee machines on their premises and the costs associated with such. Not all departments provide coffee machines, but the Productivity Commission has machines in Canberra and Melbourne — they’re Nespresso and were $430 each (excluding GST) if you were wondering. Can’t be productive without coffee, right? Staff buy their own pods. Over at the Department of Industry, Innovation and Science though, the coffee machines were $12,431.43 (including GST) when they were purchased between 2006 and 2008. Now’s a good time for a shout out to the Productivity Commission as well — in answer to a question on subscriptions taken out by the agency, it was revealed the PC subscribes to “Crikey electronic magazine”.

Don’t mess with the Murdochs. Is the Murdoch family (net worth $10 billion) not getting a lot of love from Frankston City Council as it seeks a rezone of the late Dame Elisabeth Murdoch’s Cruden Farm to cash in on the booming residential market?

It usually doesn’t take long for politicians who resist Murdoch rent-seeking to start getting publicly attacked, but today’s swingeing editorial in the Herald Sun was one to behold.

How dare Frankston City Council ask basketballers to contribute modestly to a new $12 million stadium, the paper thundered. Why this matters to readers all over Victoria is anyone’s guess, but it would be interesting to know what motivated Herald Sun editor Damon Johnston to elevate this issue three days after the Murdochs went public with their Cruden Farm plans.

Pure editorial independence and a remarkable coincidence? Or was it a warning shot to the councillors to vote a certain way to help the oligarchs who control the Herald Sun?

Define: passive aggression. The Merriam Webster Dictionary’s social media team has been having a great time of late, using the dictionary’s Twitter account to make jibes about US President Donald Trump, among others. Yesterday, the dictionary weighed into the online outrage over the treatment of a United Airlines passenger dragged off a plane. The airline had tweeted in response to questions about the incident that: “Flight 3411 from Chicago to Louisville was overbooked. After our team looked for volunteers, one customer refused to leave.” Merriam Webster shot back with the definition of “Volunteer” as “someone who does something without being forced to do it”. 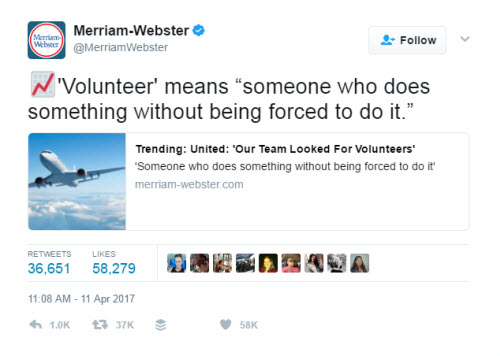 TPG finally gets its mobile network

“Don’t mess with the Murdcoh’s”? Once upon a time that sort of behaviour would have been called “stand-over tactics” – now it’s “editorial initiative”?

That tanty :- all this preferential treatment for One Nation – for their vote – this time a photo op? For her political advertising?
Big Dealer Turbott brought her and the kids to this dance – when he called a DD election – he has to dance with her.

One of the many mysteries about Talcum’s appalling judgment is why he thought a DD would be a good idea – even if no-one foresaw the tsunami of PHON, simply halving quotas ensured that there would be more independents and thus an even more unbiddable Senate.

What a Dick, Turnbull – “Let’s have a senate where 77 votes buy’s you a go on the legislative drafting gate”?
The sooner Turbott calls a (normal) election the sooner he can flush this his very owned Augean stables of this political detritus.