The pre-admission interview room at the Gates of Heaven. St Peter is interviewing a new recipient …

Clarke: Pleasure to be here, Pete.

St Peter: So how have you been?

St Peter: What have you been up to lately?

St Peter: How was that?

St Peter: And what about before that?

Clarke: Weeellllll, you know this, that and the other. I’ve mostly been a satirist of sorts.

St Peter: Oh well, how did you get into that?

Clarke: Dags hang off the end of sheep, your saintness, and Fred Dagg hung off the end of New Zealand. He was a behatted, wild-haired gum-booted farmer with several sons all named “Trev”, and he would discourse on matters ranging from the philosophy of Sartre to it looking like rain. “G’day,” he would start. “G’day, how to write the great Australian/New Zealand novel. First, remove all interesting characters. If by chance you find you have created an interesting character, have him, or her, killed off half-way through. This can be due to a confluence of circumstances arising from man’s inhumanity to man, exacerbated by the something something something and due to the war.”

Clarke: Yes, this is all happening in the mind of a fan in a layover at Kuala Lumpur airport, so some quotes may be a little ropey.

St Peter: How did you come on this Fred Dagg character?

Clarke: Well, as I once told ABC radio, I had this uncle who was from “a town so small it made Palmerston North look like Vienna at the turn of the century”, and he would do things like train his dog to jump in the back of the ute every time someone said “it looks like rain”. Those and a few of the other characters around at the time. Figures in a landscape. Plus I’d gone from Palmerston North to New Zealand’s most elite private school, and there I’d read people like Brian O’Nolan, Myles na gCopaleen and Flann O’Brien.

Clarke: He was, your eternalness, he was. An Irish journalist/novelist/columnist who relied on sardonic wit and developed the fake interview form, the nonsense quiz, answers without questions, a genius of the 20th century. He taught me an enormous amount.

Clarke: And thank God for that.

St Peter: You must be looking forward to meeting him.

Clarke: Not in the slightest.

St Peter: What then?

Clarke: Well, after the radio, TV, stage shows and LPs with Dagg, there was nowhere else to go in New Zealand unless you were a pair of lesbian yodelling sisters, and I was pipped at the post for that one. So I came to Australia in 1979 and turned my attention here.

St Peter: What were the highlights of your early work?

Clarke: Well one of them was an early stab at the interview form with John Howard, in which Howard is taken to be, and is, a polymath, hilarious when counterposed to the grinning, silver-spectacled political nerd he was then. “Mr Howard, I hear your novel is being translated,” the interviewer says.

“Yes, I’m overseeing the French, German, Italian and Slovenian translations. However I am defeated by the version in Mandarin.”

“I shudder to think. Go and learn it I suspect.”

“And how is the molecular biology research going?”

“Oh I’m very much the dunce of the laboratory. I make a lot of coffee …”. And so on.

There was also one about David Hill, the newly appointed head of the ABC, the first such to be sent in to apply “general management principles” to a broadcaster, and which we did as a knowing take on Python’s “Cheese Shop” sketch:

“Mr Hill, thanks for joining us.”

“Have you worked as a producer?”

“A cameraman or sound recordist?”

“What is mixing, exactly?”

St Peter: What else?

Clarke: Well there was The Fast Lane TV series with Andrew Knight, about a pair of clueless detectives and their secretary, in which she solves all the mysteries. The tapes of that were wiped by the ABC’s Legacy Prevention Department, but it could be remade from scratch or the scripts published. There was Lonely Hearts, written for the late Paul Cox. God, he’ll be here too, morose even in Paradise, a beautiful understated film about shy people, there was writing and performing for The Gillies Report series in the mid-’80s, including of course “farnarkeling”, the first, best and last take on breathless Aussie sports commentary, featuring the hapless  farnarkeling champion Dave Sorenson, who, following a return from an awards night, “suffered a mishap while deplaning and was rushed to hospital for an emergency accoladectomy”.

Clarke: Then there were more films, TV series, radio, a series of reports during child-raising years about militant and intransigent unions — “the massed 10-year-olds” and “the amalgamated five-year-olds” — and the book of great Australian verse, in which all of the great poets in English were assumed to have been Australian, living as diesel fitters in Mooroopna or whatever. William Carlos Williams’ poem about beached whales “why do they do it/why do they swim so close to shore?” etc became “why do they do it, the great labour leaders/why do they beach themselves year on year?/is it ignorance of where they are going, or sham at where they have been …” and so. A Leonard Cohen parody in which “General Mills marches his troops up the hill to fight the forces of General Boon” and so on.

Clarke: Then there was A Royal Commission into the Australian Economy with Ross Stevenson, more movies, more TV series, including The Games, also with Ross and others, a series of reports. And then the interviews, with Bryan Dawe. More than a quarter century of them. They started dry, and they ended powdered. They were never less than interesting, I would say, and they were genius at their best — even if the most memorable recent one was simply an audio replay of George Brandis trying to explain the internet to David Speers, put over me and Bryan mugging and grinning. But that’s comedy your wholeness, it’s ceaseless transformation of inherited forms. That’s why Aristophanes is as funny to us as Seinfeld is, while the passions and motives in Aeschylus are, in many ways, alien to us. That’s comedy. The least of it dates and falls away, the best becomes eternal. Time is the best editor, especially if you’ve worked with anyone wearing wooden earrings from Screen Australia.

St Peter: Well, that’s all great. I think you can go on in.

Clarke: Well I dunno, your adjective. This has all got a little mawkish. Is heaven the right place for a satirist? What’s it like in there?

St Peter: To tell you the truth, there’s been a few problems since we outsourced functions to Serco, and instituted key performance indicators. But our new vision statement and branding is an exciting process, currently being led by the CEO of one of Australia’s major power utilities-

St Peter: John, thanks for joining us.

Clarke: It was my great pleasure, Your transcendence.

St Peter: And ours too, mate, it really was ours too. 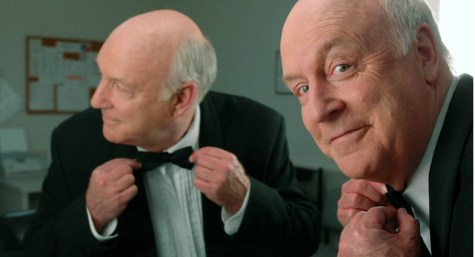 One of the best Clarke and Dawe interviews since 1989

The Millionaire Factory and the Salvos

Who knew that you are an accomplished channel? A fitting piece, Guy.

pitch perfect, thanks to you both

I really like your writing, Guy.
You’re no John Clarke… but who is?