Why Turnbull is suddenly a social media star. Prime Minister Malcolm Turnbull is having a great time in India with his Indian counterpart Narendra Modi, which, of course, results in a lot of selfies — even public transport selfies. 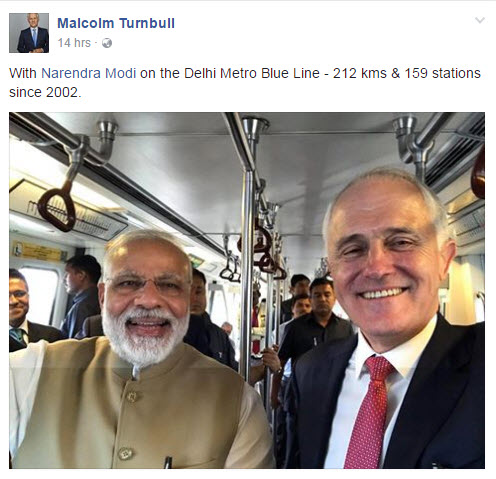 When Modi was new to his role, he came to Australia to meet with Turnbull’s predecessor Tony Abbott, who saw a huge a increase in his Facebook likes — around 40,000 — after posting a picture of the pair. Turnbull has also received a jump in likes since posting a photo of himself and Modi, but nowhere near as many as Abbott had; his page has had a spike of 8131 likes in the past few days. 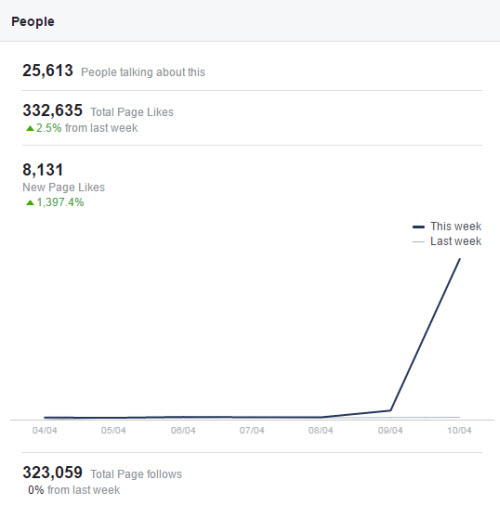 Have Indian Facebookers cooled on their affections for Australian leaders? Or have they cooled on Modi himself? Indian polling shows that voters are still keen on Modi, despite the shambolic removal of high-value cash in the country earlier this year.

Is everything rosy with iron ore? Normally markets would be wetting themselves at a 20% slump in the price of a key commodity like iron ore, and yet nothing has happened — the headless chooks in the media haven’t appeared emulating Henny Penny, crying “the sky is falling”. Instead some very funny people in Canberra have been claiming the government will have an extra $4 billion to play with in the May budget. But that won’t be happening if iron ore continues its latest slide. Ore with 62% content in northern China fell 1% to US$74.71 a dry tonne on Monday, according to Metal Bulletin Ltd. That was after a 6.8% fall on Friday, which pushed the commodity into a bear market from a February peak of more than US$94 a tonne. Iron ore futures in Dalian in China fell to their lowest since November on Monday, and those in Singapore traded below US$72 a tonne.

The shares of the biggest miners have been hardly ruffled by the side. BHP Billiton shares — targeted by US hedge fund investor Elliott Management — rose 4.6% on the ASX on Monday, while Rio Tinto shares were up 1.1%. Fortescue Metals Group shares were all but unchanged yesterday.

Greens factions sprout. Are the Victorian Greens about to be engulfed in the same kind of factional infighting as their New South Wales counterparts? A Facebook page belonging to a group calling itself “Grassroots Greens” appeared this week, with a “statement of intent” document taking aim at internal policies and the party’s tactics to increase its support. The page has only a few dozen likes so far, and it doesn’t seem to be aligned with any actual elected state or federal MPs. The manifesto has taken aim at the party’s recent Victorian and federal election campaigns, where resources were pushed into fighting seats in Melbourne’s inner south-east:

“We must not be afraid to be outspoken on the issues we care about, and we must not be afraid to put forward radical policy, out of fear of negative press. Instead of chasing votes in wealthy, inner-city blue-ribbon electorates by being careful and playing small target politics — we should instead be appealing to low income earners, working class, and middle class people in suburban and regional areas by being bold and radical but staunchly progressive.”

But who’s behind it? Group members are not so keen to put their names to the sniping, writing that they do not reveal their names or have official spokespeople. “It is up to individual members whether or not they out themselves as a member of the Grassroots Greens.”

Late last year a group called “Left Renewal” popped up in New South Wales, grouping around Senator Lee Rhiannon and promising to “fight to bring about the end of capitalism”. The groups have both use a version of the Greens logo as their group symbols.

The Greens have long claimed to be without factionalism, but that seems to be falling apart in a few places.

Unilever cuts ad spend. Unilever is the world’s second biggest consumer products company after Nestle. It spends hundreds of billions of dollars a year around the world promoting its roster of brands like Lynx, Dove, Omo, Lipton and Ben and Jerry’s. Recently Warren Buffett and Kraft Heinz tried to buy the company for US$142 billion, but were told to go away in no uncertain terms. Unilever management then started a review of its sprawling business and late last week decided to sell off a host of brands, buy back shares and cut costs.

One area of cost cutting will have an impact on Australia’s advertising industry, including commercial television. Unilever CFO Graeme Pitkethly says the company will cut the number of ads it makes a year by 30% and slash the number of ad agencies it uses around the world by 50%.

Pitkethly says Unilever employs 3000 agencies around the world, which will be reduced “by half”. He says the company produces more ads than actually make it to air so the strategy going forward will be to show more of the better ads that make the cut for longer periods of time. Unilever has not revealed its planned savings, but it is estimated by US analysts that the company spends around US$7 billion a year on advertising (down from US$8.2 billion in 2011). If the 30% figure turns out to be the case, the company’s ad spending across the board will drop by more than US$2 billion.

Mixing your metaphorical chooks there – “Henny Penny, crying “the sky is falling” when you meant Chicken Little.
Henny Penny was a hard working fowl who ploughed, sowed, reaped, milled & baked her own grain then told all those wanting a fresh baked loaf to get lost.
Pity that We, the People, don’t follow her example and tell multinational miners pay up or to take their holes elsewhere.