Bashar al-Assad has never shown that he cares how long the war lasts and how many more die in agonising circumstances, writes former Australian ambassador in Syria Ross Burns.

The April 4 attack on Khan Shaykhun, in Syria’s Idlib province, using chemical warfare weapons was almost certainly the work of Bashar al-Assad’s regime. This is the only explanation that ticks off all the boxes: means, motive and opportunity. The hastily assembled US retaliatory attack on the Syrian air base at Shayrat, near Homs, however, might not have been particularly effective in addressing the problem of residual nerve agents in the hands of the Syrian regime.

This is not to argue that the American attack on the Syrian air base at Shayrat was reckless or high-risk. It could have been a lot more effective, though, if it had been carefully planned and executed. Damage to the base was not extensive and the Assad regime has endured worse humiliations. The fact that Trump may have been partly motivated by wanting to be seen as decisive may have worked against the use of military power for defined ends.

Although chlorine had been used in Syria on several occasions since 2013 by all sides, resorting again to binary chemical warfare agents such as sarin gas represents an open defiance of the international norms Damascus had agreed to be bound to under an inspection and disposal program organised by the Organisation for the Prohibition of Chemical Weapons (OPCW) and underwritten by Russia. For the outside world now to turn a blind eye to use of the same weapons would effectively amount to standing with arms folded while the level of savagery in this conflict rose to new heights.

Though only an attack mounted by the Syrian armed forces would meet all the criteria to explain the use of chemical weapons, an independent readout on the product used should be a key element in underlining the seriousness of the red line now crossed. Everything relayed via Syrian opposition forces, particularly via sources from the al-Qaeda end of the spectrum or the Turkish authorities, should be counter-checked before being uncritically recycled ad infinitum.

Other doubts have been raised whether the Syrian regime could have been so clearly bent on self-destruction soon after its apparent move to offensive mode with the retaking of Aleppo on December 6, 2016. This, however, is a total misreading of what is happening on the ground. The pattern of the Syrian conflict has one common theme: the regime has huge difficulties in holding terrain due to the poor quality of its conscript-based armed forces and the capacity of its opponents to crop up almost at will, crossing the vast central steppe and suddenly appearing in the inhabited areas around the western rim and the Euphrates river valley. In particular, the media picture since Aleppo fell has overlooked numerous firefights along the southern rim of Idlib province, where Islamist fighters have been dumped following “ceasefire” deals concluded in and around Aleppo, Damascus and Homs. These fiercely committed forces (mainly al-Qaeda offshoots) are easily re-supplied across the Turkish border and have begun pressing south towards the next provincial capital, Hama.

Hama is one of a handful of Syrian cities that has remained relatively quarantined during the course of the conflict. It is no coincidence that it was the city that, 35 years ago, served as the final battleground in the Muslim Brotherhood’s rebellion against the government. The punishment meted out in the regime’s bombardment of the city was so brutal and decisive that Hama has remained in clamp-down ever since. If it can now be drawn directly into the struggle, the regime will suffer a moral loss which would more than outweigh the victory it has claimed in Aleppo.

The skirmishes in the Orontes Valley rim area — between the cities of Hama and Idlib — over the last month thus pose a new challenge to the government. This means that rather than Bashar being on a high — and so concerned not to offend the international community just as he hoped to be acknowledged as winner — the president’s thinking was possibly the opposite; more like panic. He therefore might choose to echo his father’s brutal messaging with the flattening of central Hama in 1982. Moreover, being tough in the face of a US president who seems to have no stabilising principles governing his behaviour (and to be an isolationist at heart) might seem like an opportunity not to be lost.

The probability is that Assad saw the attack as a means of discouraging any drive by Islamist forces towards Hama. The Russians’ counter-claim — attempting to pin the incident on the town’s rebels, said to have concocted sarin in an empty shed — simply signals that there is no credible alternative explanation and that the Russians might have been caught flat-footed. Assad may not have told the Russians he was scrapping the 2013 agreement they had underwritten through the OPCW, though it could not have escaped the Russians’ notice given their shared use of the base at Shayrat.

Trump has promised a strategy but does he have one? The OPCW admits that 5% of the identified chemical weapons have still not been accounted for. Trump’s improvised rhetoric tried to give the impression the Shayrat raid addressed the chemical weapons problem. The fact is that it was Obama’s measured working-through of options (now endlessly recycled to provide a factoid said to display irresolution) that led to the removal of 95% of the nerve agents held in Syria. The Shayrat raid has done nothing to neutralise the other 5% — sufficient for a few more Khan Shaykhun. Obama had the credibility to engage the Russians in the OPCW process; Trump this time seems to give priority to the use of Khan Shaykhun to discredit Russia, so hoping to shake off the charge that he has been soft on Putin.

The reality is that the only way of replacing Assad is to engage Russia (and Iran) in the process. Getting rid of ISIS still remains the logical first objective in the fighting. Will Bashar al-Assad provide further distractions to taunt Trump, demonstrating that the president of Syria still calls the tune? Bashar al-Assad has never shown that he cares how long the war lasts and how many more die in agonising circumstances. He is determined to wait out all his opponents. Perhaps, though, he needs to be more careful with his friends, and Moscow must wonder whether they should not at least have him on a tighter lead. Trump plays a dangerously short-term game, obsessed with old animosities, driven by impulses and disinterested in strategy, preferring the one-off deal. Given the big battles that still await Syria in Idlib province and around Raqqa, the conflict’s capacity to regenerate itself stretches on endlessly. Shayrat was barely a blip on that horizon.

*Ross Burns, a former Australian ambassador in Syria is the author of Aleppo, A History (Routledge 2016). His website tracks damage to Syrian monuments threatened in the current crisis 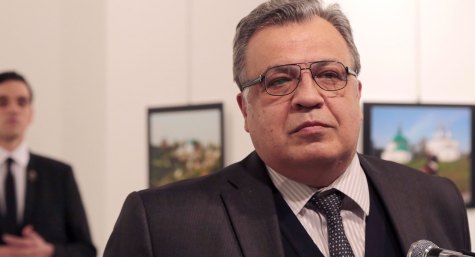 Assad will not care while he is Putin’s darling. It is not hurting him. Perhaps the first missile should have been his palace. However, I fear the repeat of Iraq and I observe with distaste the constant shadow of the Erdogan Pasha, a mongrel first class and of course the ever present Headchoppers of Saudi Arabia, where Trump has towers. Repeat after me, Saudi Arabia is not a nice nation and is not a friend. The Saudis are antithetical to our interests.

Ross Burns is highly respected and at least has given a possible motive for Assad. The much reported belief that Assad was gaining the upper hand with Russian support, and statements from the USA (and our own Julie Bishop) that he no longer be replaced only days before this atrocity, raises the obvious question regarding his motivation. Maybe it is true that those earlier reports and opinions were wrong, but we didn’t hear this view before. Still, the idea that he would gain by embarrassing Russia to keep them onside is stretching it IMO.

I see that a recent U.K. Ambassador to Syria opined that Assad was not behind the attack. Ross’s esteemed colleague, Bob Bowker I think agrees that Assad is probably responsible but is still the best option, that there are worse around inside and outside the regime.

Yes, Ross. If Bashar al-Assad ( I note the accent of Bashar, well done ) just declares Syria to be the 53rd state of America all his problems will just disappear. Long live regime change, Ross.

I think it was a recent article in the Guardian. It seems that some years ago the British may have supplied Syria with the raw materials for the chemical weapons. Not much about that in the MSM though.

I find all the Australian commentary to be blindly ridiculous. The only reason ISIS ever got to Syria is because the damn USA trained them in camp Bucca in Iraq precisely to get rid of Assad while pretending not to get rid of Assad.

If PBS Frontline can be honest about this why are the Australian bloviators so far off the mark.

And tell me why being dead from gas is worse or more dead than being dead from barrel bombs, ordinary bombs dropped by 60 western nations or starvation – they are all dead and I didn’t notice bloviators in Australia being too fussed about the million or so Iraqis we helped to slaughter.