National security new FIRB focus. As Crikey recently noted, there has been a looming vacancy at the Foreign Investment Review Board, with current chair Brian Wilson’s term expiring over Easter and (at least in our view) it being unlikely Wilson would be reappointed. Well whaddya know — on Saturday, Treasurer Scott Morrison’s office quietly announced that former ASIO head David Irvine — also former head of ASIS when that agency illegally bugged the East Timorese cabinet — would replace Wilson. Irvine was appointed to FIRB in the wake of the dust-up with the Americans over the long-term lease to a Chinese firm of the Port of Darwin, to provide a stronger national security focus to FIRB’s deliberations. Irvine, however, has no business or financial experience of any kind. Expect FIRB to be even more focused on blocking Chinese investment under the former spook.

No jab, no job. Ms Tips hears that the usual annual flu shot offered to News Corp employees has been axed this year due to budget cuts. Will this mean that over winter the News Corp journalists will all be off sick, causing massive productivity decline? We don’t know. But we also hear the company is preparing for cuts as large as those recently announced by Fairfax. Perhaps the company has come to the conclusion that there’s no need to give flu shots for people soon to be made redundant?

Writing policy is tough. There’s no doubting News Corp’s Simon Benson is excellent at writing up a drop from within the Liberal Party. These days at the Oz, Benson might have been miffed that Scott Morrison’s speech today on social housing wasn’t given exclusively to him — Fairfax journalists got it as well, as part of that tiresome habit of politicians these days to deliver their speeches via the morning papers. But Benson was excited about something bigger: a “broader housing package” that the government was working on that would be “cradle to the grave” and “the most comprehensive intervention by a federal government into the life cycle of home ownership”. While we wonder if “cradle to the grave” means the government will be ordering cemeteries turned into housing, what Benson described actually looked more like a set of half-arsed measures resulting from a “round up the usual suspects” call to the public service (the presence of the hoary old “encourage migrants to go to the regions” idea shows that). But things went awry when Benson was given a separate column to do some policy analysis. First, he constructed a bizarre straw man that some unidentified critics thought the federal government was being politically unwise to address housing — “on the ­surface to be an act of political ­insanity” — when, um, everyone in the country is crying out for it.

Benson then goes on to claim that the whole housing problem is one of too much regulation. Nowhere, of course, does he acknowledge what RBA governor Philip Lowe repeated last week, that taxation arrangements are a major part of the problem, or even that Morrison himself referred to the “excesses” of negative gearing last year, or the now widespread view even within the property sector that the capital gains tax concession, and maybe negative gearing, have to change. Benson also reckons people should be allowed to use their super to buy property instead of “being ripped off by union-run super funds”. Unions don’t run super funds — they’re jointly run by unions and employer groups. And it’s the big bank-owned retail funds that rip people off via high fees and poorer performance. And funny he didn’t mention that even Mathias Cormann thinks allowing super to be used for housing will lead to the obvious consequence: higher house prices. Our advice to Simon the Stenographer — stick to what you’re good at, writing up drops, and leave policy to grown-ups.

Stranger than fiction. Alec Baldwin does an excellent impression of US President Donald Trump. So good, in fact, it fooled an online producer for the Nine Network’s website.

Nine’s mobile news site posted a picture yesterday of Baldwin appearing on Saturday Night Live (which he has been doing since long before the election) alongside a wire story about a meeting between Trump and Chinese President Xi Jinping. 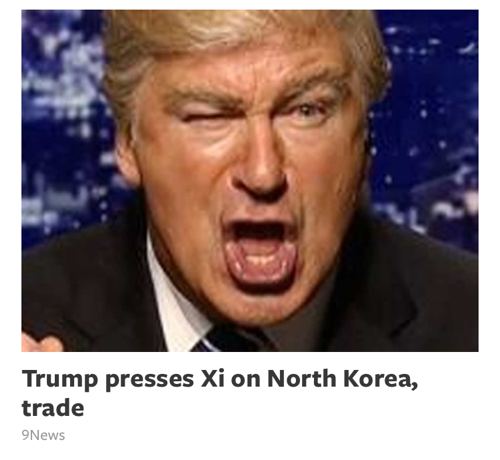 The still is taken from this segment on SNL, which was filmed before Trump was elected president. The story no longer has an image attached to it.

Missing WA election promises found. On Friday we had a tip wondering where WA Labor’s election promises had gone; they were no longer on Mark McGowan or the party’s website, which came just as McGowan was talking up the severity of the financial problems the new government had been left by its predecessor. Luckily, a tipster tells us the promises documents can be found here. We just love being so helpful.