Crikey Worm: How the election went so wrong for the Libs

Good morning, early birds. It's D-Day for the Liberals, and Donald Trump gets his Supreme Court Justice. It's the news you need to know, by Sally Whyte and Max Chalmers.

It’s time for the blame game to start, as former minister Andrew Robb hands down his report into the Liberal Party’s 2016 election campaign, where Malcolm Turnbull just scraped over the line to retain government — albeit with a very slim majority and an even more difficult Senate crossbench. The report will be delivered to state presidents and directors of the party, as well as parliamentary leaders including Julie Bishop, George Brandis and Mathias Cormann. The Fairfax papers report: “Those present will be able to read the review but will have to return their copies, underlying the sensitivity of its findings.”

Federal director of the party Tony Nutt stood down two days ago, ahead of the release of the report, but former prime minister Tony Abbott says there is plenty of blame to go round for the election result:

In a speech to the Sydney Institute last night, Prime Minister Malcolm Turnbull talked up the opportunities in India ahead of his visit to the subcontinent next week.

“India is undergoing a dramatic economic transformation and our close partnership creates opportunities for both nations,” he said.

The visit will focus on trade between the two nations, with an emphasis on energy and education. As well as meeting with Indian PM Narendra Modi, Turnbull is likely to meet with owner of the controversial Adani coal mine, Gautum Adani.

“The main recipients will be the dividend holders — not traditionally a disadvantaged, vulnerable section in the community. And the other people who will benefit will be the senior executives of those companies giving themselves bonuses … All the while the vulnerable people are being squeezed at the other end.” — that’s former head of Treasury and former RBA governor Bernie Fraser in the Fairfax papers today on the government’s company tax cut policy.

Sydney: Top levels of the federal Liberal Party will receive the report on the 2016 election campaign — and as written above, it’s not full of compliments.

Sydney: Channel Seven is in court again, this time with the case brought by newsreader Talitha Cummins, over what she claims was unfair dismissal while she was on maternity leave.

Papua New Guinea: The PM will travel to our closest (geographically speaking) neighbour today ahead of the trip to India.

Supremely confident Labor just skating over the truth — David Crowe (The Australian $): “He may rule out a tax cut, but how else does he plan to give the economy a jolt? How else will he lift salaries other than by mandating the minimum wage?”

Liberals headhunt for a miracle worker — Michelle Grattan (The Conversation): “One strategic issue for the Liberals when framing the next campaign will be how negatively to run against Shorten. Internal party critics attacked the 2016 campaign for not targeting Shorten harder. The decision was based on research and Turnbull’s own preference for a positive campaign.”

Recognising Aboriginal Australia is still in the too-hard basket — Michael Gordon (The Age): “More than six years after Australia began a process to finally recognise Indigenous Australians in the constitution, there is a very real prospect that its completion could prove beyond the nation.”

Labor’s Fair Work claims are demonstrably false  — Michaelia Cash (Sydney Morning Herald): “Despite spending years valuing the independence of the Fair Work Commission, Labor has now completely abandoned this position, insisting the Parliament – not the independent umpire that they established – is best placed to determine penalty rates and wages.”

Donald Trump‘s pick to fill the vacancy on the US Supreme Court has been confirmed by the Senate, after Republicans changed the rules to override a filibuster by the Democrats. While the Republicans hold a slim majority in the Senate they did not have the 60 votes needed to end debate on the nomination of Judge Neil Gorsuch. As a result, the party deployed the so-called nuclear option, changing the rules so a simple majority can now end debates on Supreme Court nominees.

As Republicans fight Democrats in the Senate, it’s Republican v Democrat-turned-Republican in the White House. A rift between Steve Bannon and Trump’s son-in-law Jared Kushner is now playing out in public after Bannon left the National Security Council. So bad is the relationship, Bannon has reportedly called Kushner the two worst things in the alt-right vocabulary: a “cuck” and a “globalist”.

Philippines President Rodrigo Duterte appears to have changed tack on China’s role in the South China Sea, ordering troops to occupy uninhabited islands in the region that his country lays claim to. Duterte had originally broken with predecessors by moving away from the US and closer to China, softening the country’s approach to the contested waterway in the process. Some outside observers have speculated the latest switch is to shore up Duterte’s domestic support. — Reuters

US Secretary of State Rex Tillerson has said there is “no role” for Bashar al-Assad to play in governing Syria. In the comments, Tillerson also said the US had “no doubt” that the Syrian regime was responsible for this week’s chemical weapon attack. Tillerson today met with Chinese President Xi Jinping, who is in the US to meet with Trump. — BBC

British Prime Minister Theresa May has told European council head Donald Tusk that she will not negotiate away Gibraltar’s sovereignty as part of Brexit. The territory has become a surprise point of tension in the wake of the UK’s historic vote to leave the European Union, with former Conservative leader Michael Howard implying May would be prepared to go to war with Spain to keep the tiny strip. — The Guardian

Alt-wrong: The Australian right is startling for its incoherence (The Monthly): “Really, the local right has become a kind of anti-left. Instead of anti-Trump, Australian conservatives are anti-anti-Trump, saving their bile for protesters and the emotional, and are so excited by the prospect of their opponents’ humiliation they don’t know quite what to do with themselves.”

‘The dead were wherever you looked’: inside Syrian town after gas attack (The Guardian): “All that remains of the attack on the town in rebel-held Idlib province is a faint stench that tingles the nostrils and a small green fragment from the rocket. The houses nearby are emptied of the living.”

‘Are you open? Why not?!’ On the invisibility of retail workers (Overland): “This disappearance, as I found out very quickly when I started my first job in a high-end shoe store, is the key to a successful service career. What customers most want is for you to become a charming sort of vacancy, an invisible but enabling extension of their desires, both carefully solicitous of their needs and entirely free of anything that suggests you have needs of your own.” 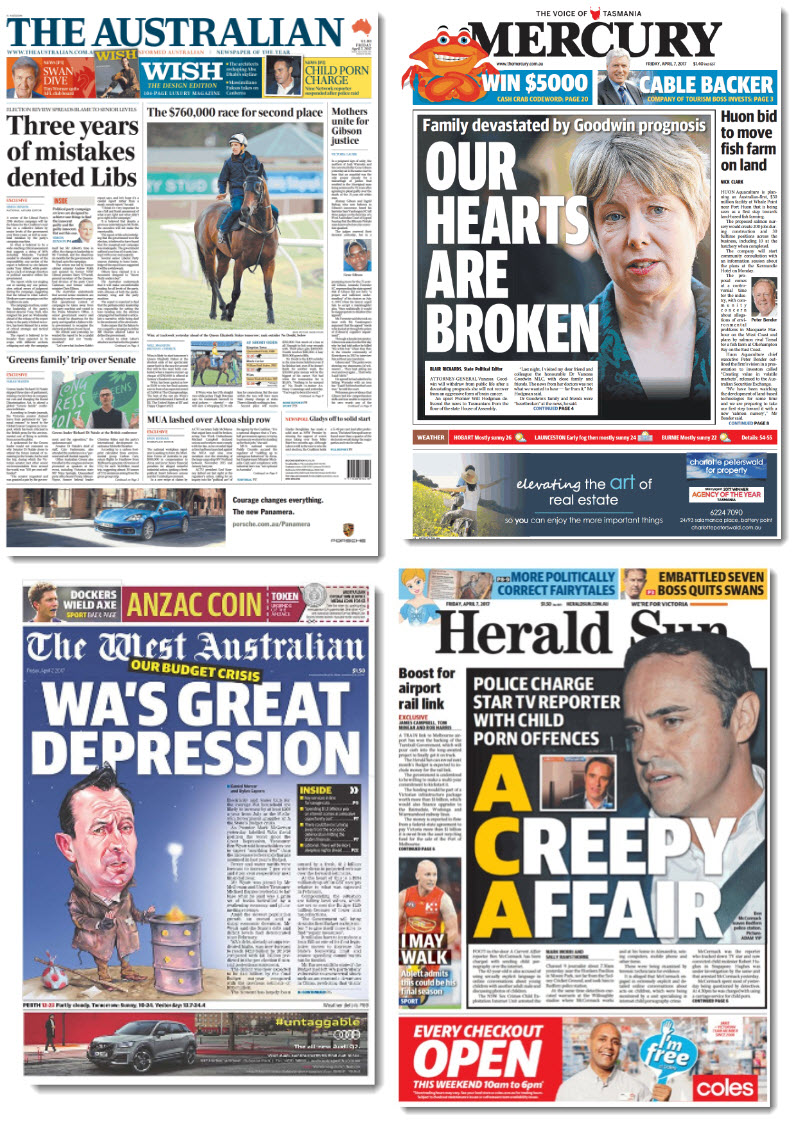