Cameras and tabloids turn on one of ACA’s own

The arrest of an A Current Affair reporter for child pornography offences has unleashed the worst of Australia's tabloid media.

A Current Affair‘s tabloid nemeses have barely contained their glee at the arrest yesterday of ACA reporter Ben McCormack on child pornography charges.

“Tonight, he is accused of being precisely the individual he exposes for a living,” Ovadia said over footage of McCormack’s arrest.

Ovadia’s colleagues at Sunrise this morning continued the coverage, with a reporter stationed outside Nine for live crosses into the program about the arrest, despite there being no actual events to cover. 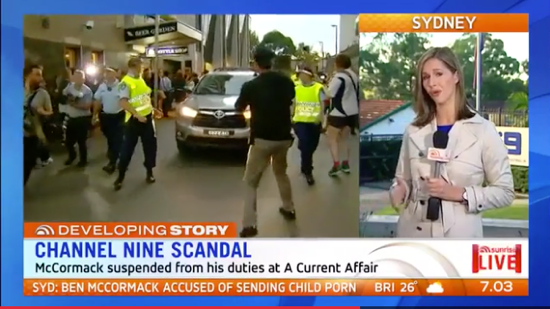 Over on Channel Nine, Today kept coverage low-key this morning, limiting any mention of the story to its news bulletins.

The newspaper tabloids went all out, splashing the story on the front pages of The Daily Telegraph and Herald Sun: 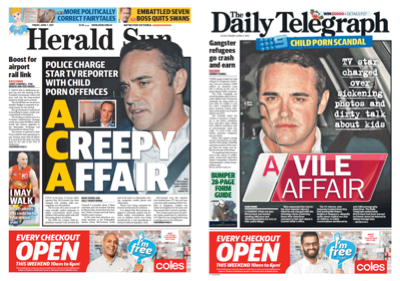 The Tele also dedicated two inside pages to the story, with a banner reading, “A Creepy Affair”.

Unsurprisingly, Daily Mail Australia took the coverage to a grubby low, with an exclusive splash on a “gay incest” short film directed by McCormack.

The story was the lead on Nine’s news bulletin last night, with a live cross to reporter Jayne Azzopardi, who was at the Redfern police station, where McCormack had just been released on bail.

Nine’s Leila McKinnon, standing in as host on ACA last night, addressed the charges at the beginning of the program, but the segment was clipped from the full program posted online.

“We intend to cover the story without fear or favour,” McKinnon said.

Channel 7 and Ovadia ought to be sued over the grubby and patently false “he is accused of being precisely the individual he exposes for a living” statement.
Robert Hughes, star of Channel 7’s long-running Hey Dad..! sitcom, was found guilty of ten child sex offences: two counts of sexual intercourse with a child, seven counts of indecent assault upon a person under the age of 16 and one count of committing an indecent act. NSW Police have alleged that McCormack was engaged in sexually explicit conversations about children with an adult male and that he discussed child pornography. There has not been even the vaguest suggestion that McCormack has acted inappropriately or indecently with anyone under-age.
Two very different sets of circumstances, not that the truth and facts seem to matter when networks go to war.

I was wondering that too and why the whole arrest and search is so public and publicised. I guess name suppression is not going to be sought, then?!

Those who live by slime get slimed in the end?