Who can pedal? As we have previously mentioned, former prime minister Tony Abbott is having a great time making sure his successor Malcolm Turnbull doesn’t forget about him, and he is using his annual Pollie Pedal to do it and raise money for charity at the same time. This morning on 2CC Abbott said he planned to stand at the next election, meaning his shadow won’t be gone from the halls of power for a little bit longer — and the Pollie Pedal will still exist for a while as well. Ms Tips noticed that the photos from this year’s event, raising money for veteran support group Soldier On, showed a different turnout to previous events. Are we reading too much into it? Maybe, but let’s have a look — Environment and Energy Minister Josh Frydenberg and Social Services Minister Christian Porter were part of last year’s event, but they are nowhere to be seen this year (being a minister is busy work). Regular Pollie Pedal loyalists Angus Taylor, David Gillespie and Kevin Andrews (who has blogged that he has overcome an Achilles injury to be able to participate) are there this year, as is Abbott’s mate Andrew Hastie. It’s not all Liberals, though — Labor’s Luke Gosling is on the list of riders, but it’s unclear if there are any Greens (they are very pro-cycling) as part of the event. We asked Senator Janet Rice — who has been very vocal about her love of cycling — if she had been invited to be part of the eight-day ride, and her office told us: “Janet hasn’t received an invitation to our knowledge but she cycles daily and would welcome the opportunity to show Tony how it’s done.”

One for the country, Robert. Speaking of former PMs, the greatest yard-glass sinker this or any other country has ever produced is launching a beer brand, named after himself. Bob Hawke, a man Ms Tips doubts has had to pay for a drink since 2012 at the very least (after he inhaled a frothy in seconds before a group of awestruck cricket fans), has lent his likeness to Hawke’s Lager, the first tipple to be released by Hawke’s Brewing Co. He’s obviously not the first pollie to have a beer named after him — Labor’s Anthony Albanese beat him to that with his Albo Corn Ale Beer.

Happy shopping, possums. Believe it or not but Barry Humphries is about to appear in a TV commercial for Westfield shopping centres. His good mate Carla Zampatti, the well-known fashionista and former Westfield director, is behind this idea. She has convinced Humphries to do a TV ad for the Lowy family company. It will be out shortly.

Athletes don’t exercise, they train. Lastly, we bring your attention to this tweet from the organisers of next year’s Commonwealth Games on the Gold Coast. We were very confused by it, but subsequent tweets from the same account explain that our fingers need to start training in order to buy tickets later this month. Clear as mud. 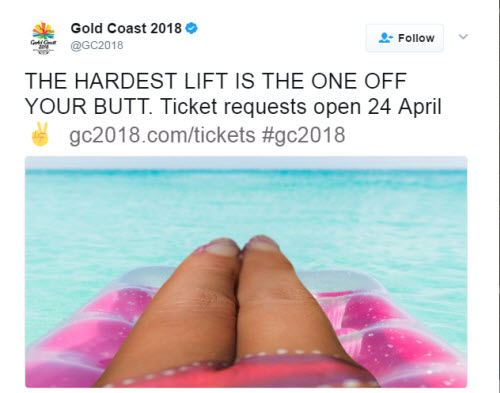