Adamson said it was also not good enough that women only comprised 26% of Australia’s ambassadors and heads of mission overseas, and there had never been a female head of mission in London, Washington, Tokyo or Jakarta.

Free speech for some. Controversial anti-Islamism campaigner Ayaan Hirsi Ali seems to have been very picky with the media outlets she’s given interviews to since she dropped her trip to Australia due to safety concerns.

So far, Hirsi Ali has only spoken with a handful of outlets, despite the wide coverage the story has received. Wire service Australian Associated Press scored an interview for print, she spoke with Alan Jones this morning (he is a great supporter), and she has spoken to Channel Seven and Triple J’s Hack program.

Fairfax, at least, has tried to get her on the line for an interview, but she turned down the media company because of previous stories it had written about her, according to her publicist.

Nothing like a passive-aggressive BBQ. We noted yesterday that Prime Minister Malcolm Turnbull had made the mistake of refusing a sausage in bread offered to him by a member of the public on Monday and the fraught area that is barbecues and politicians. Looks like former PM Tony Abbott noticed too — and just so no one forgets what a great job he did at all areas of the top job, he tweeted yesterday about what a great time he was having at a barbecue: “Thank you Tumut Lions Club for manning the BBQ. Loved the snags and steak sandwiches!” 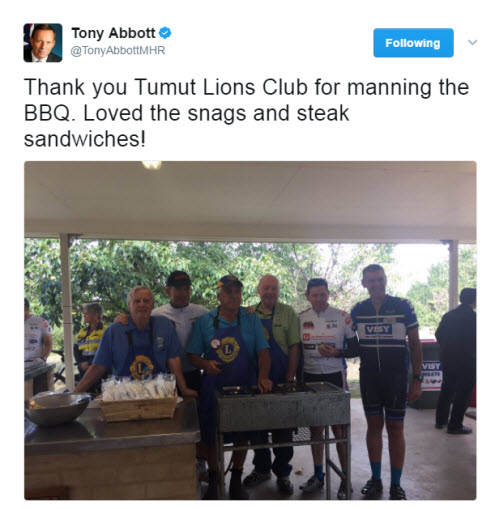 Surprise questions. A tipster from Cairns was at Opposition Leader Bill Shorten’s “town hall” meeting last night and asked him a question about Australia’s responsibilities to refugees on Manus Island and Nauru. While Shorten trotted out his line about finding a regional solution, the tipster says: “While I am sure that Bill has little in common with our immigration minister, he clearly wasn’t expecting such a question in Cairns.”

Penalty rates don’t cost so much. There is a lot to be said for getting out in front of a scandal. Broken initially by the Herald Sun on Sunday evening, news spread through the week of staff at celebrity chef George Calombaris’ restaurants being significantly underpaid — The Age, the ABC, The Sydney Morning Herald, The Daily Telegraph, The Australian and others all published stories about it.

In an email to all staff Calombaris said he was “devastated” by the underpayments, which largely related to overtime.

The focus on Calombaris and his contrition (the majority of headlines mentioned his “devastation”) gave him the opportunity to mention that he had actually overpaid some staff, but he wasn’t going to be pursuing them. It made sure he was the one to bring up the fact that the Fair Work Ombudsman had raised concerns with the business a year before they initiated any kind of audit, and 18 months before anyone was compensated, as “something which should have resulted in us fixing our systems earlier”.

Almost all the stories, except the Oz, didn’t mention that Calombaris is on the record as an outspoken opponent of the penalty rates restaurants have to pay. Back in 2012 he told The Power Index “it’s just not a good business practice to be paying penalty rates”.

In the same Power Index interview, Calombaris said Sunday rates for restaurant workers were excessive because, after all, “it’s not like they’ve had to go to uni for 15 years”.

Calombaris had a lot to say on good business practice back then, but it turns out he could have taken a closer look at his own.

Is Calombaris Sicilian for “effete, over entitled wanker”?