Mayne: 20 more politicians who have been paid by Rupert Murdoch

Don't forget, Tony Abbott was once a journalist for News Corp.

After starting off with 10 names yesterday, today we’ve got another 20 examples of current and former politicians who have been paid by companies controlled by Rupert Murdoch.

Former ABC director and journalist Quentin Dempster has been in contact, so let’s first start with the eight new names he has identified:

Stephen Loosley: former senator and national president of the ALP who has been a paid columnist for The Sunday Telegraph and The Australian, along with a News Corp strategic adviser.

Graham Richardson: former senator, federal minister and secretary of ALP NSW who now has his own show on Sky News, alongside his Friday column in The Australian. Total payments likely to be approaching $1 million for the well-connected former communications minister, who was also a long-term lobbyist for Kerry Packer.

Just in case you think the six Labor politicians mentioned by Dempster suggests Rupert leans to the left, here are three prominent former Republicans who have been on the Fox News payroll over the years.

Mike Huckabee: the former Baptist pastor, Arkansas governor and two-time candidate for the Republican presidential nomination has chalked up seven years on the Fox News payroll, pocketing millions along the way.

Sarah Palin: Republican vice-presidential candidate in 2008 who was a paid Fox contributor from January 2010 until June 2015, earning up to US$1 million per year, as reported in The Los Angeles Times.

There are also plenty more British politicians to enjoy Rupert’s cash, so here are another seven, with several more to come later as this list is fleshed out:

Chris Patten: got to keep his 50,000 pound advance from Harper Collins, which dropped the book chronicling his time as the last British governor of Hong Kong because Rupert felt the criticisms of China would damage his commercial interests.

Tessa Jowell: the former Labour cabinet minister had her phone hacked 29 times in five months in 2006 at the time her former husband, David Mills, was under pressure over ties to Silvio Berlusconi. Reached a 200,000 pound settlement in 2011.

David Blunkett: the former British Labour MP resigned as home secretary in 2004 after The News of The World hacked his phone and revealed he was having an affair. Received an undisclosed settlement in 2011.

Mark Oaten: the former Liberal Democrat MP in the UK lost his job when his phone was hacked in 2006. He settled in 2011 and wrote about the experience again in 2014.

George Galloway: former British MP and anti-war campaigner who settled for 25,000 pounds, plus costs, after his phone was hacked at the beginning of the Iraq war in 2003.

Finally, we must not forget Tony Abbott, who was a former News Corp journalist. At The Australian’s 50th birthday bash in 2014, Abbott lavished praise on his old paper for its contribution to Australian democracy. While serving in federal parliament, Abbott has also written numerous columns for The Australian and other News Corp papers, although it is unclear how much, if anything, he was paid for these.

In the same vein, Scott Emerson spent 10 years working for The Australian until 2004 and was then elected to the Queensland Parliament in 2009 and later served in Campbell Newman’s cabinet. He is now Queensland shadow treasurer.

* Have we missed anyone? If so, send us an email, as this list could well finish up with almost 100 names given Rupert Murdoch’s extraordinary record as a media CEO for the past 63 years. 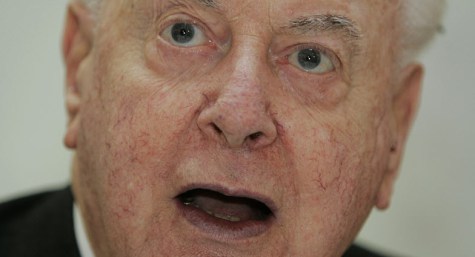 Mayne: another 10 former politicians funded by the Murdoch machine, including Gough

Mayne: Murdoch salaries hit $600 million — but you wouldn’t read about it

I am reminded of the Eagles’ “Lyin’ Eyes” – giving oneself to “a man with hands as cold as ice”.