Canberra’s Bermuda Triangle. One of the more important public sector appointments is just days from expiry, yet there’s a seeming indifference to who is going to be appointed, or reappointed, to fill it. The appointment of the chair of the Foreign Investment Review Board, Brian Wilson, ends on Easter Saturday. So far, however, there hasn’t even been an ill-informed leak as to whether Wilson will be reappointed or there’ll be a new chair. Wilson’s reappointment would be enjoyable mainly because it would send far-right Murdoch hysteric Terry McCrann into a froth-mouthed fury. But Wilson may have blotted his copybook with the Coalition back in 2014 when he publicly acknowledged that Joe Hockey’s veto of the Graincorp acquisition — one of the earliest signs that the new Abbott government was going to be a dud — was a political decision. Word is that confirmation for the appointment has been caught in Rudd-style limbo in the Prime Minister’s Office, along with a few others. But it’s funny how the PMO always gets the blame for such things, no matter who’s in government …

Turnbull sizzled for sausage diss. Australian politicians face a real test of character when it comes to eating sausages in bread (or a sausage sandwich, if that’s what you call it) when out and about with members of the public. Yesterday, Prime Minister Malcolm Turnbull made the faux pas of refusing the sausage in bread offered to him on a paper plate: 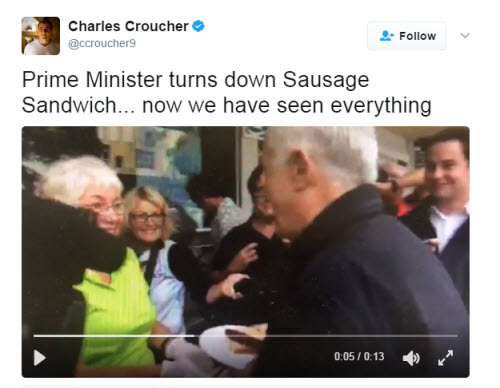 He explained that he would be too busy walking around to eat it, but Ms Tips thinks it was the absence of tomato sauce or onion that made the offer seem less attractive. Perhaps he was haunted by the image of his rival Bill Shorten, who failed at eating this sausage in bread during the election campaign last year: 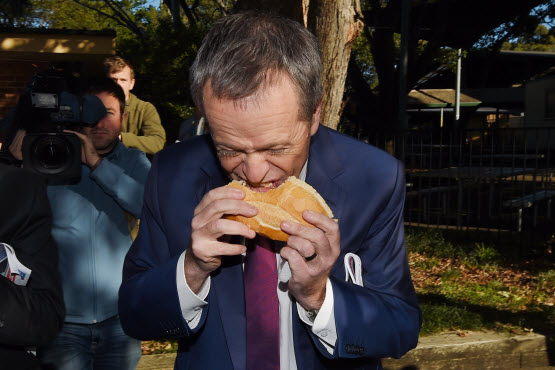 Perhaps we need sausage-eating guidelines for MPs. First rule is to accept the snag sanga, then eat it from the end, not the middle.

Trump’s murky dollars. The White House just doesn’t get it. It has just been announced that President Donald Trump has donated his salary from the first quarter — or US$78,333.32 — to the National Park Service as part of his plan to donate his entire $400,000 annual salary to charitable causes. This is the same organisation that will lose 12% of its funding under Trump’s first budget. The National Park Service looks after parks, memorials and other US property covering 20% of the country’s landmass. The Park Service was also the organisation Trump blamed for underestimating the size of his inauguration crowd on January 20. He called the acting head (the boss had been dispatched by Trump’s transition team) on January 21 to ask for photos that proved the media had lied about the size of the crowd. The Park Service was also told to stop using its Twitter account after it had sent out pictures of Trump’s crowd compared with that for president Barack Obama in his first inauguration back in 2009 (Obama’s was bigger).

This donation will become a tax deduction for Trump. Many Americans, especially Trump’s supporters, think that Trump is not being paid and that his pay is going to be donated straight to various charities (because that is what he promised). What Trump isn’t trumpeting is that the donation is tax deductible. At the same time, just how much money Trump withdraws from his trust fund has become more difficult to uncover. According to media reports overnight Trump and his family have quietly changed the trust deed over his personal assets to make distributions easier to make, without the need for them to be disclosed. The trustees are his son, Donald Jr, and Allen Weisselberg, long-time chief financial officer at the Trump Organisation.

Beautiful one day, top secret the next. The Washington Post broke the story this morning that private military company Blackwater’s founder Erik Prince met with a Russian “close to Vladimir Putin” as part of a plan to set up communication between US President Donald Trump and Moscow. The meeting was reportedly set up by the United Arab Emirates and took place in the Seychelles islands. While Trump has called the story “fake news”, the Seychelles Secretary of State for Foreign Affairs told the paper the story didn’t surprise him: “The Seychelles is the kind of place where you can have a good time away from the eyes of the media. That’s even printed in our tourism marketing. But I guess this time you smelled something.” As you do.

You’d think politicians would be used to eating sh*t sandwiches. A sausage should be a (vague) improvement

Ed Miliband never recovered from an excrciating pic of his failing to better a bacon buttie which made him look like the dork he is.
As for eating snag roll from the end, that would be portrayed as infelicitously phallic by the gutter press.

AR, the way to do that is to own it, and *really* make it look like you’re making that sausage happy. 🙂 In essence, dare the paper to use that photo.