It is all about freedom. And speech. And rights. And it doesn't actually matter, because for the last time, the Racial Discrimination Act is not going to be amended.

Not since my own teenage attempts to woo through poetry have so many words, so passionately delivered, changed so little. Hour upon hour upon hour and more than 133,000 words were dedicated last week to Senate debates around the government’s ultimately doomed attempt to amend section 18C of the Racial Discrimination Act to remove the words “insult, offend and humiliate”, replace them with “harass” and introduce an ordinary person test. As many senators, and our own Josh Taylor pointed out, the process was very much the punishment.

Many of the most frequently used words and phrases are, understandably, related to speech and rhetoric, expression and talking. Behind the podium finishers — 18C, rights and human — comes “speech”, while in sixth position comes “say”, and rounding out the top 10 is “said”. Other notable words: “freedom” ends up just outside of the top ten in 11th with 237 mentions (“free” gets 133), while “race” and its derivatives — racist/racists, Racial (as in to with the act), racial (to do with race), racism, racially, etc — collectively got mentioned a whopping 661 times. Outside the top 20, QUT was brought up 94 times. And the late Bill Leak was mentioned 88 times, 10 more that Professor Gillian Triggs.

And 18C’s unloved sibling 18D was invoked by attackers and defenders of 18C 60 times. 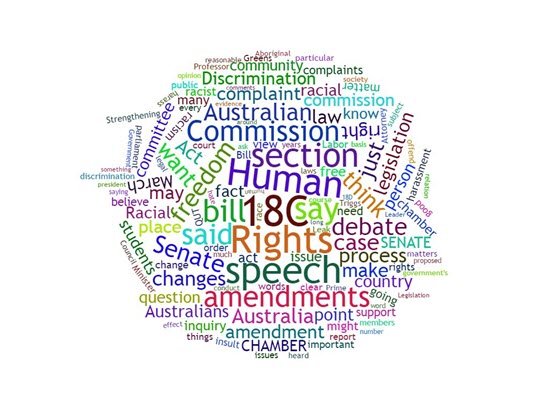