Sometimes the inner monopolist works its way to the surface and you get an explosion of indignation that someone else has cottoned onto your lurk. And so we saw this morning with News Corp CEO Robert Thomson venting about Google and Facebook in a story in the Murdoch mouthpiece of choice (for their corporate explosions), The Australian.

The story was headlined “News blasts Google, Facebook” and was placed under the fold on the lead business page, meaning that it had some prominence, but not much. We take from the placement that this is more of a whinge than a full-throated Murdoch moan.

Sayeth The Australian (we do wonder if the phones dial out at Holt Street):

“The chief executive of News Corp has labelled Google and Facebook a ‘digital duopoly’, blasting the global tech giants for manipulating the flow of information to suit their financial ­advantage and creating a ‘dysfunctional and socially destructive’ environment for journalists and publishers.

“Robert Thomson, in a scathing speech delivered at the Asia Society in Hong Kong on Wednesday night, accused Google of tailoring its confidential algorithm — which answers users’ search queries — to boost its bottom line and blurring the distinction between fake and quality news to the detriment of traditional media companies.

“‘Both companies could have done far more to highlight that there is a hierarchy of content, but, instead, they have prospered mightily by peddling a flat earth philosophy that doesn’t wish to distinguish between the fake and the real because they make copious amounts of money from both — for them, free content has been free money,’ Mr Thomson said.”

Thomson of course ignored News Corp’s position in the Australian newspaper market, where the company controls more than 70% of the daily sales, especially after being allowed to buy the daily regionals in Northern NSW and Queensland owned by APN News and Media, of which News owns 14.9% and is the largest shareholder. That gave News Corp a monopoly on newspapers in Queensland (especially south-east Queensland) — a point also ignored by Thomson. It also has a monopoly in South Australia (and especially Adelaide).

Fairfax Media and Seven West Media the only significant competitors, sharing most of the remaining 30% or so, and are losing money on their publications on an after-tax profit basis. So also is News Corp, which wrote down the value of its Australian long-lived assets by US$310 million (around A$400 million) in February. Those write-downs tell us that not even monopolists are safe from the changes being wrought by the digital world — hence Robert Thomson’s spleen venting this week (and on previous occasions as he echoes His Master’s Voice, Rupert Murdoch). — Glenn Dyer

News Corp to cut a further $40m out of Australian operation 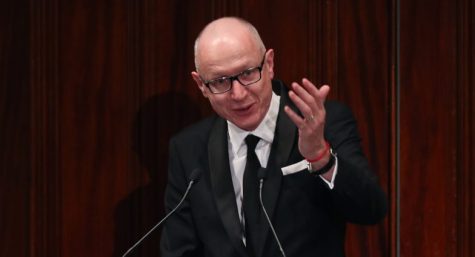 NewsCrap dog in the manger blasts Google, Facebook” and detailed in the fold on the lead business page. Haw, haw, haw!

Surely the Oz piece was satire.

No, no, if its in the NewsCrap OZ it’s serious news.

Do these adult toddlers have any idea how they look in nappies?

These born-to-rule types really have no shame and do not hesitate to lie, lie and lie again.
The mystery is, give the alleged high end consumers of mudorc’s garbage, who they think they are talking to or at.