The more interesting part of the speech was the analysis of the election result.

It’s never good when politicians try to sound hip — remember when Christopher Pyne was the “Minister for Innovation”? — and so it was with low expectations that I went to the Sydney Institute last night to hear ambassador Joe Hockey talk about “disruption”.

The phrase “disruptive innovation” was first coined by US business analyst Clayton Christensen in 1995, but really hit the headlines after the arrival of Uber in 2011. Since then, it has been applied to everything from dating to toothpaste; when political consultants say that Donald Trump “disrupted” mainstream American politics, you know we have reached peak jargon.

Anyway, it was a very prosperous-looking Hockey who fronted the room last night, wisely refraining from giving us some of his greatest hits — the “age of entitlement is over” and, to first home-buyers, an exhortation to “get a good job that pays good money”.

Instead, we got a speech that appeared to be a shotgun wedding between diplomacy and consultancy. The first part was an explanation of the Trump victory (with helpful graphs); the second was a plea to everyone to lay off Trump because, basically, “we have to work with him”.

Hockey has copped a lot of flak on social media this morning for this apparent defence of Trump, but it is a little unfair. As Australia’s ambassador, he can hardly come out and say that the man is as crazy as a sack full of bandicoots, can he? And while Joe is renowned for shooting off his mouth — “poor people don’t drive cars” —  he now has a whole embassy full of diplomats to write his speeches in code.

“We need to avoid the temptation to become constant critics of the new US administration because it is not a carbon copy of the previous administrations,” he said. And continued, in what must be the understatement of the year, “the new Trump administration is very focused on practical policy outcomes. It is not beholden to ideology or tradition. It is not in the DNA of the administration to procrastinate or give undue deference to process.”

The more interesting part of the speech was the analysis of the election result.

Quoting the US Census Bureau, he told us that the logistics industry is the single biggest employer of working-class white men in America. This means that whenever the issue of driverless cars and trucks comes up, millions of truck and taxi drivers feel real terror. If you live in an area where all the coal mines are closing, it’s not hard to see what comes next, is it?

And while we have all read about the educational divide between Trump and Clinton supporters, the graph he used was startling. 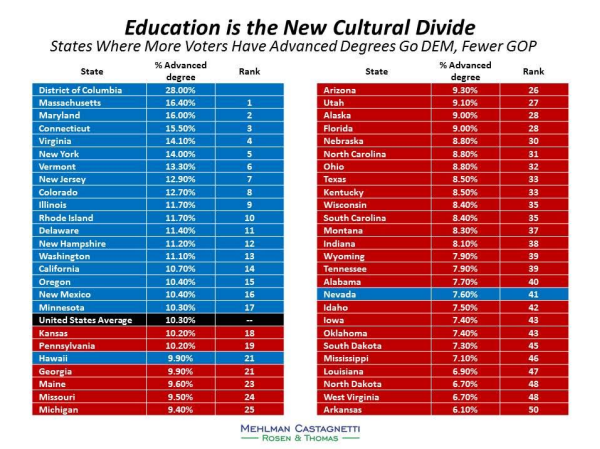 While not discounting issues of race, gender and geography, “this slide reveals that education is without doubt the most crucial factor when predicting electoral support — in fact this data proves it to be the new electoral divide in the United States,” he said.

The data is clear; residents of states like Massachusetts, New York and California, with the highest percentage of professional degrees, are much more likely to vote Democratic, he said. States with poorer-educated residents, like Arkansas, Texas and Iowa, tend to vote Republican.

“I am sure people can think of some parallels here in Australia,” he exclaimed (Queensland One Nation voters, we are looking at you).

Hockey also noted that a huge proportion of the US middle-class voted for Trump because they had never recovered from the economic devastation of the global financial crisis. According to the census, the median net worth of US families in 2007 was $137,955; by 2014, it had almost halved to $72,919. (All in 2014 dollars).

This meant that the “median net worth of many Americans effectively wound back 33 years to 1983. Add job insecurity and an aging population to that equation and you have a pretty disgruntled constituency.”

The ambassador also pointed to surveys that showed that in 1958, 78% of Americans said that they trusted the government in Washington all or most of the time — by 2015, this figure had crashed to just 19%. It’s not hard to see why they wanted to “Drain the Swamp”.

In conclusion, Hockey pointed out that we were now only 69 days into the new Trump administration, which means that there were 1392 days to go. Or, as Trump prefers to look at it, 464 rounds of golf at Mar-a-Lago. #MakingFloridaGreat.

Joe, a very prosperous looking leaner, parliamentary defined benefit pension in one hand and ambassador salary in the other hand. Yep, not bad eh, for a failed LNP treasurer. But man oh man, Joe can count …he has a good income and a lot of luck.

‘…. wisely refraining from giving us some of his greatest hits….’

Having seen those graphs it’s understandable why conservative governments spend less on education than those on the Left: if you dumb ’em down the peasants are more likely to vote for the Right.

Zut, dumb down the peasants, etc. …ain’t that the truth.

These data compare well with those for the PHONies here…another set of uneducated rabble!
Take a look at David Marr’s Quarterly Essay to find out a whole lot more about our own lunatic fringe!!

Peak jargon has a way of popping up from time to time. Real cute, that “disruptive innovation”. Not so long ago (for some of us) John Howard briefly coined “incentivation” as a socio-political objective. This was, thankfully, howled down quickly.

To go with his other “King of the Road observations” :-
“the poor and their limited driving habits”;
“get a good job that pays good money (so you can afford to buy a house closer to work and not have to drive so far to get there)”;
“The Age of Entitlement is dead : where are the Canberra house keys Darl”;
“I smoke old stogies I have found – in my humidor”?