Diplomatic faux pas. Australia’s diplomats are all back in town, meeting with each other and their Australian-based counterparts this week to discuss shaping Australia’s foreign policy white paper. Our tipster tells us that in a room of diplomats, Department of Foreign Affairs and Trade secretary Frances Adamson made a small faux pas that might not have gone down so well with her boss, Foreign Minister Julie Bishop. We’re told:

“At the end of day one this week of the $1.17 million love-in for Australia’s ambassadors, DFAT Secretary Frances Adamson introduced Trade Minister [Steve Ciobo], who delivered a speech, by saying she’d ‘saved the best till last’. Whoops! First on the agenda that day had been Julie Bishop’s introductory speech for the two-day meeting.”

What happens if you hold a presser and no one comes? We know what it can be like to have trouble with your email server, but at least our delays have never left us fronting up to an empty press conference. That’s what happened to Labor’s spokesman for Employment and Workplace Relations, who looked absolutely appalled yesterday when no one was there to ask him any questions. A video put together by SBS’ David Sharaz shows Brendan O’Connor thundering “what is happening to mainstream media?”. Turns out it wasn’t that journos had decided they didn’t care what he had to say — the email alerting them to the press conference was delayed and didn’t arrive in inboxes until hours after the actual presser. Awks. 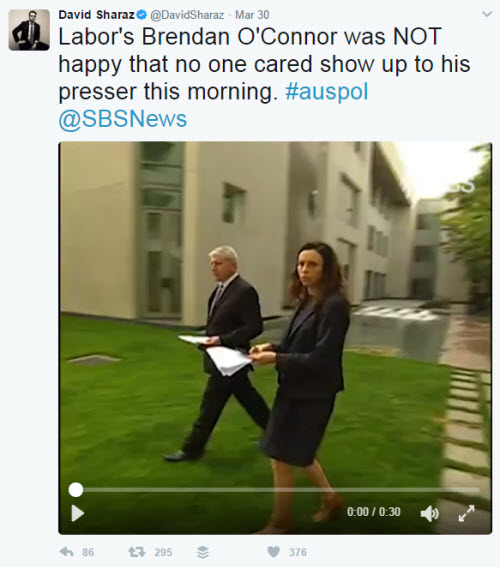 Survey says. Marriage Alliance was trumpeting the results of a survey it released to far-right-wing columnist Miranda Devine earlier this week, which Devine breathlessly reported showed “just 33%” of people strongly favour same-sex marriage, with 19% somewhat supporting it (meaning a majority at 52% support it overall, according to the anti-gay lobby’s own survey).

The exact questions used to derive these answers and the subsequent ones about “concerns” about marriage equality leading to Safe Schools and gay adoption (using the slippery slope fallacy they like to use) were not included in Devine’s article, and rather than doing the usual thing of posting the full survey to their website, Marriage Alliance simply linked to Devine’s article. Devine appears to be close friends with Marriage Alliance’s Sophie York, so it isn’t so surprising the group would drop this “exclusive” to her, but attempts by other journalists to get a hold of the report have come to nothing.

BuzzFeed‘s Lane Sainty and Crikey‘s Josh Taylor have both contacted Marriage Alliance to ask for the report but got no response. Taylor, however, did start receiving Marriage Alliance newsletters. Could it be that the company engaged in push polling? It’s hard to say without seeing the actual survey. Sexton Market Research — which did the polling for MA — has previously done similar anti-marriage equality polling for the Sydney Archdiocese.

You won’t believe the title of this court filing! Russian tech executive Aleksej Gubarev and the two companies he runs are suing news and entertainment site BuzzFeed for libel in the US following the infamous “Russian Dossier” report. The story, which published a dossier — by BuzzFeed‘s own account unverified — claimed the Russian government had assisted Donald Trump in getting elected, while also collecting compromising information about him.

Gubarev’s legal team says the story contained false claims that he was involved in Russian hacking against the Democratic Party during last year’s election campaign. BuzzFeed has since apologised and removed his name from the report, but Gubarev has not withdrawn his case. However serious Gubarev is, there was still room for a little fun (and lot of snark) in his lawyers’ court filing this week.

A response to BuzzFeed’s motion to dismiss on jurisdictional grounds, it was titled “Six Ways Buzzfeed Has Misled The Court (Number Two Will Amaze You)… And A Picture Of A Kitten,” an obvious jab at BuzzFeed’s penchant for listicles and clickbait: 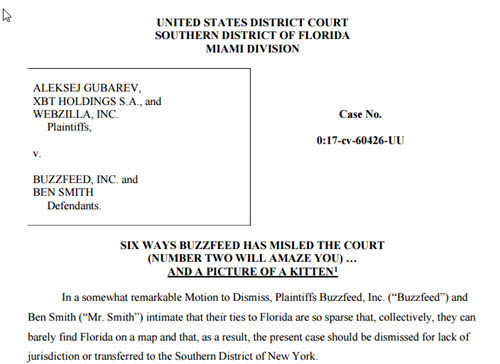 That shade, though, am I right?

Brendan O’Connor not pleased with lack of media interest

How the media will react to a right to privacy

O’Connor highlights the fault in our media – they’re using their position for prioritising what we get – and don’t.