What can and can't you get away with doing if you're a journalist or photographer working in Parliament?

Throughout this sitting week, AAP’s photographers and bureau chief in Parliament House have been banned from working in the building. This is the publication’s punishment for taking photos of protesters in the gallery in the House of Representatives in the last sitting week of 2016.

The punishment came due to a breach of the rules set by the speaker, and the president of the Senate, over what media can and can’t do within the halls of power. AAP isn’t the first, but often most journalists get off with a warning, or a reminder and a request to delete the photos. For example, journalists shared photos online of Julie Bishop and Malcolm Turnbull looking at their phones and watching the US election results in November. Filming screens is banned, and the photos were subsequently deleted.

The rulebook is linked and explained to new press gallery members at the time they are handed that shiny yellow pass that allows them to venture past the public areas in Parliament. The rules are often specific and complicated rather than just simply “this area is fine, but this area is banned”, but we have attempted to simplify them here to explain how it all works.

Places the general public can get to, like the Parliament House forecourt and the marble foyer, are fine to photograph and film. But media can’t photograph the mosaic at the centre of the forecourt unless it is about recognising it as an art work, or in areas like the security screening areas.

Media aren’t allowed to vox pop random members of the public visiting Parliament in the public area, but interviews and filming is allowed provided those participating have consented, and door stops outside the Senate, ministerial, and House of Reps entrances to Parliament are permitted.

Swipe your card, nod at the security guard and enter the private area and the rules become a little more confusing.

The press gallery area — as you would expect — is entirely allowed to be filmed and photographed. This is why you’ll often see a press conference held in the red halls of the gallery after a politician has finished up with their Sky News or ABC interview. Media are also allowed to film in the mural hall on the second floor between the Senate and the House of Reps and this is where ScoMo, Peter Dutton and even the PM sometimes hold short media conferences.

Also expressly allowed are all the outdoor areas (excluding the PM’s courtyard) in the private sections such as the Senate courtyards, seen here in a shot by Herald Sun journalist Rob Harris in his ongoing war with the Parliament House magpies. 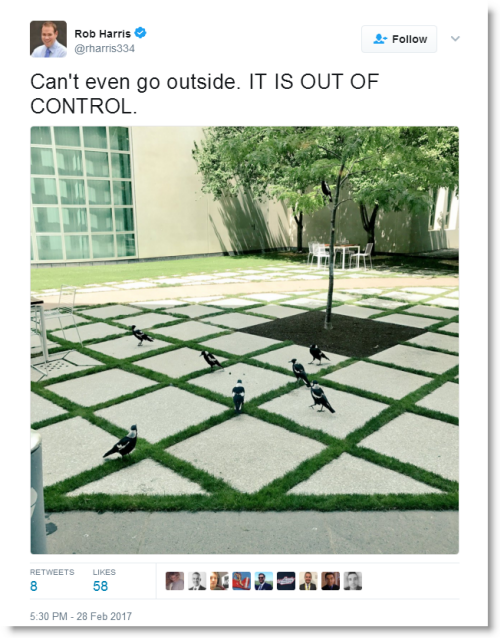 The PM’s courtyard, along with committee rooms, the blue room, and other rooms where press conferences are held, are allowed when there are press conferences or other media events being held there — similarly with party rooms and inside individual members’ and senators’ offices, subject to that politician’s permission. Everywhere else (excluding the chambers, which we will cover next) is restricted. This means you can’t take photos or conduct interviews with people in the parliamentary cafe Aussies (oh the people you’d see snapped together) and no photos in the hallways of the offices of the politicians. Sadly, the result of this rule means the often delightfully insightful posters politicians put up in their office windows go unpublicised, such as this one taken by Labor Senator Glenn Sterle (presumably not taken by a member of the media). 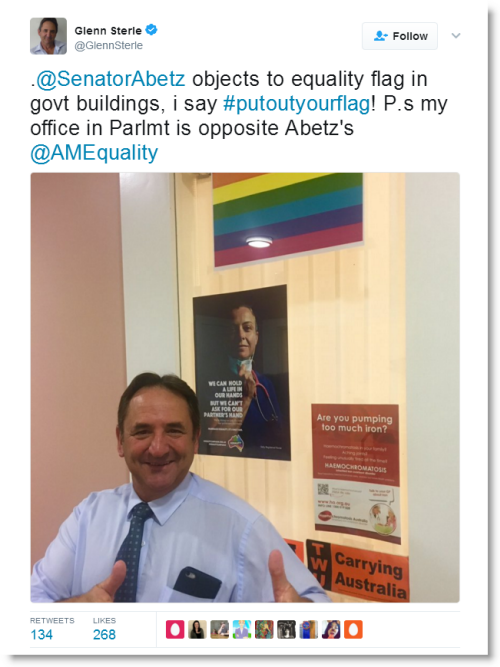 Once in the House of Representatives and the Senate, the rules on what media can and can’t film are very specific. It is always at the whim of the speaker or the president, but the general rules are:

Until recently, the Senate had a weird rule — one that didn’t apply to the House of Reps — which said only the person with the call (i.e. the person making a speech or point of order in the Senate) could be photographed. There had been some resistance from senators to change the rule because it would lead to photos of them shutting their eyes, or in some other unexpected facial contortion. After much protestation from the gallery, Senator Derryn Hinch passed a motion in October scrapping the rule and photographers have been free to take photos of whichever senator they want since the end of November. Hinch himself has been photographed with his eyes shut in the chamber.

The penalties for breaking the rules range from denial of access to the galleries for a day, up to a ban during a sitting week (as AAP has received), or even having a pass cancelled or passes for the publication entirely suspended.

And give it a few days before that tweet is pulled down. Has happened before.

I know a lot of Crikey’s readers are journalists and I know that some of them even work in parliament house in Canberra but for heavens sake, does Crikey really think this tedious whinge about the intolerable burdens of journos in that place is worth any space at all, let alone the amount it occupies. Perhaps next Bernard Keane can give us a 2000 word diatribe about the unfair way shoppers are treated at his local supermarket and complain bitterly about the people who go through the 12 item checkout with 13 items in their basket. Parliament house in Canberra looks like replacing AFL as Crikey’s obsession.